Did Governor Perry try to strong-arm Rosemary Lehmberg into resigning? Upon reflection,  some of the criminal complaints against Perry may have a legitimate basis. 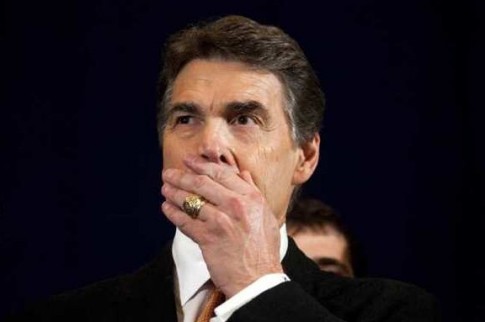 AUSTIN — When they were first announced, I was skeptical of the criminal complaints lodged against Rick Perry by Texans For Public Justice. I began to get more interested when Perry hired, at taxpayer expense, a $450-an-hour attorney to represent him. When Thorne Dreyer asked me to examine the allegations closely, I agreed to do so. Looking at the four criminal charges made me realize that some of the charges may be reasonable.

Last summer, Governor Perry threatened to veto funding for the Public Integrity Unit (PIU) of the Travis County District Attorney’s office unless District Attorney Rosemary Lehmberg resigned from office. Perry “believed” she had lost the confidence of the people after she behaved atrociously immediately after her arrest and while being booked, pled guilty to DWI, served a 45-day jail sentence, and paid a fine.

Of course, vetoing legislation and line items in the budget is among the things governors do. Such actions in and of themselves do not constitute criminal conduct. But circumstances can turn otherwise legal behavior into violations of the law.

The PIU has statewide jurisdiction over crimes involving many state officials who engage in misconduct. When Lehmberg did not resign her elected position, Perry made good on his threat and vetoed the $3.7 million appropriation. After the appropriations veto, the Travis County Commissioners Court provided some funds to keep the PIU operating at a reduced level, and that money was supplemented with some discretionary funds from forfeitures that are controlled by the District Attorney.

As many newspapers around the state noted at the time, the PIU was investigating misconduct involving one of Perry’s pet projects — the Cancer Prevention and Research Institute of Texas — which could have influenced his unhappiness with Lehmberg, along with the fact that she is a Democrat and he is a Republican.

Texans For Public Justice accused Perry of four criminal offenses provided in Texas statutes: Official Oppression, Abuse of Official Capacity, Coercion of a Public Servant, and Bribery. To understand these accusations, it is not enough to read the plain words of the statutes because the definitions of key words used are different from the common meanings of those words. A third level of inquiry is to look at how the statutes and the words have been interpreted or understood by the appellate courts and the attorney general.

Official Oppression occurs when a “public servant acting under color of his office,” that is, acting in some official capacity, “intentionally…impedes another in the exercise…of any right, privilege, power, or immunity, knowing his conduct is unlawful.” To be “unlawful,” the conduct must be criminal or tortious (civil wrong-doing) or both.

It is difficult to understand how Perry’s conduct could be tortious, but it could be criminal. A key to this aspect of the charge would be proving that Perry had been advised by a legal confidant that the conduct was criminal, otherwise he could claim he didn’t “know” his conduct was unlawful.

Abuse of Official Capacity can be a crime if a “public servant (such as the governor) intentionally or knowingly violates a law relating to the public servant’s office” with the “intent to obtain a benefit.” In this case, “benefit” appears to refer to something that can be measured in pecuniary terms, that is, as an amount of money. I doubt Perry stood to gain money from Lehmberg’s resignation, but even that is possible.

Coercion of a Public Servant can occur when a person, using coercion (like threatening to withhold nearly $4 million from a public official’s budget), “attempts to influence a public servant in a specific exercise of his official power or a specific performance of his official duty…or attempts to influence a public servant to violate the public servant’s known legal duty.” There is an exception to this conduct if the the person attempting to do the influencing is a member of a governing body. “Governing body” refers to a legislative body, which does not apply to the governor since he is not a member of any governing body.

Bribery, in one of its forms, occurs when a person “intentionally or knowingly offers, confers, or agrees to confer on another…any benefit as consideration for the recipient’s decision…or other exercise of discretion as a public servant… .”

A 39-year old Attorney General opinion issued by John Hill makes clear that a similar bribery statute requires a showing that there was “a representation or understanding that (the public servant) would be influenced in a specific exercise of his official duties.” This became relevant when it was revealed recently that Gov. Perry was willing to make sure that Rosemary Lehmberg would have another position in the Travis County DA’s office if she would resign as District Attorney.

A 1989 case applies the bribery statute to a situation closely parallel to this one.

A 1989 case, Kaisner v. State, applies the bribery statute to a situation closely parallel to this one. The Denton County Sheriff was forced into a runoff in the 1988 Republican primary. An intermediary of the sheriff offered the runoff challenger the position of Chief Deputy in the sheriff’s department if the challenger would withdraw from the race. The sheriff, at his trial for prosecution for bribery, denied having made the offer of a job for his opponent’s withdrawal from the ballot. Nevertheless, the appellate court found that “[t]he decision to withdraw from the runoff would have been the exercise of discretion as a public servant. Under [the bribery statute], the offer of the job was the offer of a benefit.”

If this report of Perry’s offer of another job to Lehmberg is accurate, it may fit the definition of bribery discussed in the Denton County case. If a grand jury believes it does and Perry is indicted and then convicted of the charge, he might also be found guilty of Abuse of Official Capacity, and (as noted earlier) if Perry knew that his conduct was unlawful, he could be guilty of Official Oppression.

When the allegations were made, they were referred to San Antonio Senior Judge Robert C. Richardson, who named attorney Michael McCrum as a special prosecutor to investigate whether Perry tried to strong-arm District Attorney Lehmberg into resigning. After concluding his investigation into the matters, McCrum had a grand jury impaneled to hear the evidence against Perry. We are now awaiting the outcome of that grand jury’s assessment of the evidence, which may take several months.

While I am not saying that Perry is guilty of any of the allegations made by Texans For Public Justice, I am now less skeptical of the charges. McCrum’s investigation could have found sufficient evidence to secure an indictment of Perry and perhaps enough evidence to convict him of bribery and more.