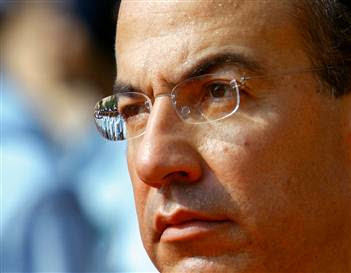 With all that sucking the sand from beneath his feet, President Felipe Calderón, like every beleagured right-winger since Nixon, is beating the Law and Order drum.

Mexico’s mid-term elections are July 5, just ten days away. The voters will cast ballots for 500 deputies to the Mexican congress, six state governors and hundreds of mayors. The way its shaping up, President Felipe Calderón and his National Action Party (PAN) will take losses. Calderón’s political muscle will be weakened, the only thing uncertain at this date is by how much.

The Institutional Revolutionary Party (PRI) that ruled Mexico for over 70 years is currently leading in the polls with 37% of likely voters. Calderón’s PAN comes in at 33%. The Party of the Democratic Revolution (PRD)lags with 16%. Lopez Obrador, Calderón’s opponent in the controversial 2006 presidential election, is not campaigning for PRD candidates, though he remains in the party. Instead Obrador is stumping for candidates from two smaller leftist groups — Convergencia and the Workers Party (PT).

The PRD might have done well in this election but spent the past six months in an internal pissing-match between its left wing and right wing. The rightists won, taking charge of the party. So Lopez Obrador, supported by the PRD left faction, took a walk along with his “Legitimate Government” — a shadow cabinet combined with state and municipal organizations — and hooked up with Convergencia and the PT. The PRD hasn’t recovered from this.

The Mexican Legislature, both its Senate and House, are pretty much equally divided between PAN, PRI, and PRD. At this date PAN has a few more senators and representatives. The PRI and PAN ussually ally on important issues. That gives them over two-thirds of the votes, leaving the PRD out of the game. On July 5 the PRD would have to more than double its number of legislators to put the brakes on the right-wing governance. That isn’t in the cards.

Then there is the mounting “none-of-the-above” movement — primarily a “netroots” campaign that’s gaining traction. Voters are being urged to strike off all the names on their ballot, simply file it blank, or stay home. Right now this bloc is polling at 11%. Expect to see this number climb.

A low voter turnout is predicted — about 30%, a major drop from the 41.75 that voted in the 2003 midterms and less than half of the voters in the 2006 presidential election. The youth vote is nowhere to be seen. Polls show that 18-20 year-olds are not even registering to vote.

With all that sucking the sand from beneath his feet, President Felipe Calderón, like every beleaguered right-winger since Nixon, is beating the Law and Order drum.

Mr. Calderón painted a grim picture of the security situation in some of the most violent parts of the country, noting that crime gangs and drug cartels were carrying out “an interminable recruitment of young people without hope, family, opportunities, future, beliefs or convictions.”

And where did all the “hope… opportunities… future” go? A case can be made that they were roadkill on Calderon’s deregulated free-market highway lined with religious-right “family values” billboards. Since that has resulted in the same disaster witnessed here under Bush and the Republicans, Calderon needs the narcoguerra, needs the cartels, needs the violence to distract from the fundamental incompetence of his administration — like his old BFF Bush needed the “war on terror.”

And when Calderon takes up the hammer on the narco corruption in his rivals’ parties, he best be careful. That long green spreads wide.

[This story was also posted at NarcoGuerra Times.]