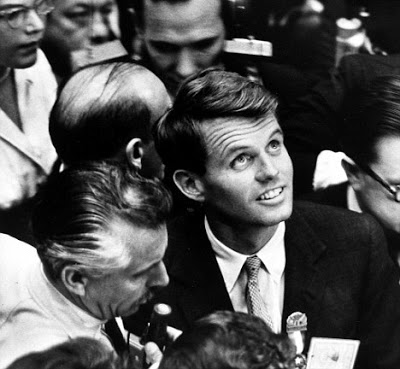 As long as these forces operate, and are not pursued, there is no democracy, whatever the window dressings.

See ‘Did the CIA kill Bobby Kennedy?’ by Shane O’Sullivan, Below.

I was stuck by the concluding paragraph in the article below from 2006 –- about the CIA and the assassination of Bobby Kennedy — about the relevance now of this old story. Robert Kennedy’s 81st birthday would have been last Sunday

My mind was on Iran. I was thinking we (such American movement as we are) should keep the focus on the United States’ role, grievous problems with our own elections, human rights, and covert operations and operators. Then I see this article, which underscores for me an urgency here to go after and expose the dark forces in this government, past and present, continuing to operate, both the covert ones connected with assassinations and coups, etc, and the overt ones like wars of choice in Iraq, and arming Israeli attacks on Palestine.

As long as these forces operate, and are not pursued, there is no democracy, whatever the window dressings. The Iranian democracy in the streets should be a spur to our own struggle, to root out the powers behind the powers here. Full investigations, no statute of limitations on criminal politics, no praise to the secret keepers, accountability forever. Here and Iran, both. Here, as there, the powers privatize the commons and steal the national wealth.

I hope those seeking a more open society can prevail in Iran. Moussavi and the other challengers will become captive to the increasingly principled — meaning radical — demands of the movement. Such insurgencies were put down in Hungary, Czechoslovakia, China. In other places they overwhelmed national authority, and stirred the people’s desire to be free. I heard an Iranian student say, on a phone broadcast, “This is our best chance to be free. If we fail, it will be a long time before we have a chance again.”

When the freedom call merges with “god is great,” it can be a powerful force indeed: an underground organized from the rooftops. The people are furious, it can lead to an awakening of consciousness, rethinking everything, until there is no going back. Iranian young people chanting and marching against the government and for respect (drawing praise from the right wing government in Israel and the American right also).

I hope the youth of Palestine and in America take it to heart, that the voice of the youth be heard.

Did the CIA kill Bobby Kennedy?

In 1968, Robert Kennedy seemed likely to follow his brother, John, into the White House. Then, on June 6, he was assassinated — apparently by a lone gunman. But the author says he has evidence implicating three CIA agents in the murder.

At first, it seems an open-and-shut case. On June 5, 1968, Robert Kennedy wins the California Democratic primary and is set to challenge Richard Nixon for the White House. After midnight, he finishes his victory speech at the Ambassador hotel in Los Angeles and is shaking hands with kitchen staff in a crowded pantry when 24-year-old Palestinian Sirhan Sirhan steps down from a tray-stacker with a “sick, villainous smile” on his face and starts firing at Kennedy with an eight-shot revolver.

As Kennedy lies dying on the pantry floor, Sirhan is arrested as the lone assassin. He carries the motive in his shirt-pocket (a clipping about Kennedy’s plans to sell bombers to Israel) and notebooks at his house seem to incriminate him. But the autopsy report suggests Sirhan could not have fired the shots that killed Kennedy. Witnesses place Sirhan’s gun several feet in front of Kennedy, but the fatal bullet is fired from one inch behind. And more bullet-holes are found in the pantry than Sirhan’s gun can hold, suggesting a second gunman is involved. Sirhan’s notebooks show a bizarre series of “automatic writing” — “RFK must die RFK must be killed — Robert F Kennedy must be assassinated before 5 June 68” – and even under hypnosis, he has never been able to remember shooting Kennedy. He recalls “being led into a dark place by a girl who wanted coffee,” then being choked by an angry mob. Defence psychiatrists conclude he was in a trance at the time of the shooting and leading psychiatrists suggest he may have be a hypnotically programmed assassin.

Three years ago, I started writing a screenplay about the assassination of Robert Kennedy, caught up in a strange tale of second guns and “Manchurian candidates” (as the movie termed brainwashed assassins). As I researched the case, I uncovered new video and photographic evidence suggesting that three senior CIA operatives were behind the killing. I did not buy the official ending that Sirhan acted alone, and started dipping into the nether-world of “assassination research,” crossing paths with David Sanchez Morales, a fearsome Yaqui Indian.

Morales was a legendary figure in CIA covert operations. According to close associate Tom Clines, if you saw Morales walking down the street in a Latin American capital, you knew a coup was about to happen. When the subject of the Kennedys came up in a late-night session with friends in 1973, Morales launched into a tirade that finished: “I was in Dallas when we got the son of a bitch and I was in Los Angeles when we got the little bastard.” From this line grew my odyssey into the spook world of the 60s and the secrets behind the death of Bobby Kennedy.

Working from a Cuban photograph of Morales from 1959, I viewed news coverage of the assassination to see if I could spot the man the Cubans called El Gordo — The Fat One. Fifteen minutes in, there he was, standing at the back of the ballroom, in the moments between the end of Kennedy’s speech and the shooting. Thirty minutes later, there he was again, casually floating around the darkened ballroom while an associate with a pencil moustache took notes.

The source of early research on Morales was Bradley Ayers, a retired US army captain who had been seconded to JM-Wave, the CIA’s Miami base in 1963, to work closely with chief of operations Morales on training Cuban exiles to run sabotage raids on Castro. I tracked Ayers down to a small town in Wisconsin and emailed him stills of Morales and another guy I found suspicious — a man who is pictured entering the ballroom from the direction of the pantry moments after the shooting, clutching a small container to his body, and being waved towards an exit by a Latin associate.

Ayers’ response was instant. He was 95% sure that the first figure was Morales and equally sure that the other man was Gordon Campbell, who worked alongside Morales at JM-Wave in 1963 and was Ayers’ case officer shortly before the JFK assassination.

I put my script aside and flew to the US to interview key witnesses for a documentary on the unfolding story. In person, Ayers positively identified Morales and Campbell and introduced me to David Rabern, a freelance operative who was part of the Bay of Pigs invasion force in 1961 and was at the Ambassador hotel that night. He did not know Morales and Campbell by name but saw them talking to each other out in the lobby before the shooting and assumed they were Kennedy’s security people. He also saw Campbell around police stations three or four times in the year before Robert Kennedy was shot.

This was odd. The CIA had no domestic jurisdiction and Morales was stationed in Laos in 1968. With no secret service protection for presidential candidates in those days, Kennedy was guarded by unarmed Olympic decathlete champion Rafer Johnson and football tackler Rosey Grier — no match for an expert assassination team.

Trawling through microfilm of the police investigation, I found further photographs of Campbell with a third figure, standing centre-stage in the Ambassador hotel hours before the shooting. He looked Greek, and I suspected he might be George Joannides, chief of psychological warfare operations at JM-Wave. Joannides was called out of retirement in 1978 to act as the CIA liaison to the House Select Committee on Assassinations (HSCA) investigating the death of John F Kennedy.

Ed Lopez, now a respected lawyer at Cornell University, came into close contact with Joann-des when he was a young law student working for the committee. We visit him and show him the photograph and he is 99% sure it is Joannides. When I tell him where it was taken, he is not surprised: “If these guys decided you were bad, they acted on it.

We move to Washington to meet Wayne Smith, a state department official for 25 years who knew Morales well at the US embassy in Havana in 1959-60. When we show him the video in the ballroom, his response is instant: “That’s him, that’s Morales.” He remembers Morales at a cocktail party in Buenos Aires in 1975, saying Kennedy got what was coming to him. Is there a benign explanation for his presence? For Kennedy’s security, maybe? Smith laughs. Morales is the last person you would want to protect Bobby Kennedy, he says. He hated the Kennedys, blaming their lack of air support for the failed Bay of Pigs invasion in 1961.

We meet Clines in a hotel room near CIA headquarters. He does not want to go on camera and brings a friend, which is a little unnerving. Clines remembers “Dave” fondly. The guy in the video looks like Morales but it is not him, he says: “This guy is fatter and Morales walked with more of a slouch and his tie down.” To me, the guy in the video does walk with a slouch and his tie is down.

Clines says he knew Joannides and Campbell and it is not them either, but he fondly remembers Ayers bringing snakes into JM-Wave to scare the secretaries and seems disturbed at Smith’s identification of Morales. He does not discourage our investigation and suggests others who might be able to help. A seasoned journalist cautions that he would expect Clines “to blow smoke,” and yet it seems his honest opinion.

As we leave Los Angeles, I tell the immigration officer that I am doing a story on Bobby Kennedy. She has seen the advertisements for the new Emilio Estevez movie about the assassination, Bobby. “Who do you think did it? I think it was the Mob,” she says before I can answer.

“I definitely think it was more than one man,” I say, discreetly.

Morales died of a heart attack in 1978, weeks before he was to be called before the HSCA. Joannides died in 1990. Campbell may still be out there somewhere, in his early 80s. Given the positive identifications we have gathered on these three, the CIA and the Los Angeles Police Department need to explain what they were doing there. Lopez believes the CIA should call in and interview everybody who knew them, disclose whether they were on a CIA operation and, if not, why they were there that night.

Today would have been Robert Kennedy’s 81st birthday. The world is crying out for a compassionate leader like him. If dark forces were behind his elimination, it needs to be investigated