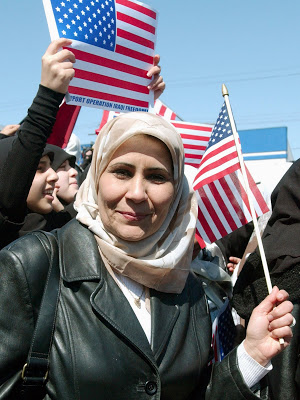 Muslims in America. Image from KUED / University of Utah.

The implication… is that when Americans display anti-Muslim bigotry — as in the past they had been anti-semitic, anti-Catholic, anti-Mormon, anti-immigrant — it makes for a quick and more complete assimilation…

You can read it here.

To cut to the chase, Mr. Douthat’s argument is that there are “two Americas” — one that respects the idea that we are a nation of many religions, cultures, ethnicities, and beliefs and the Constitution permits us all to enjoy the blessings of liberty without fear of persecution.

There is another America as well, one that, in his words, “…understands itself as a distinctive culture rather than just a set of political propositions… [that] speaks English, not Spanish or Chinese or Arabic. It looks back to a particular religious heritage: Protestantism… It draws its social norms from the mores of the Anglo-Saxon diaspora and it expects new arrivals to assimilate themselves to these norms…”

Rather than decry this second America, Douthat goes into all sorts of contortions to suggest that it is just this second America that creates the unity symbolized by our motto, “E pluribus unum.” He suggests that Mormon persecution helped force them to give up polygamy. He argues that suspicion of and persecution of Catholics forced them to give up their “illiberal tendencies” and made the church recognize “the virtues of democracy.”

Where can one begin to attack this incredible know-nothing-ism?

I tried with a sarcastic letter to The New York Times which I will share with Rag Blog readers if the Times doesn’t publish it.

Here, I want to treat Douthat’s “arguments” seriously — if only to give readers of this blog some ammunition if they ever get into a discussion with someone who was seduced by Douthat’s piece.

The implication of Douthat’s argument is that when Americans display anti-Muslim bigotry — as in the past they had been anti-semitic, anti-Catholic, anti-Mormon, anti-immigrant — it makes for a quick and more complete assimilation of the group being targeted. In effect, in order to escape discrimination, the various groups become “more like” the Americans who are persecuting them – thereby earning “acceptance” as “real Americans.” (Read Douthat’s article and see if that’s not the clear implication.)

He then lectures Muslim Americans on how to be good Americans — telling them they need leaders “whose antennas are sensitive enough to recognize that the quest for interreligious dialogue is ill served by throwing up a high-profile mosque two blocks from the site of a mass murder committed in the name of Islam.”

By the way, note that Douthat, after originally accurately describing the proposed building as an Islamic cultural center, has returned to the misstatement that this is a mosque. Though it will have two floors devoted to prayer, it is only a mosque if a hotel with a prayer chapel is a church.

Note also that in asserting that America does not speak Spanish he is denying “Americanism” to Puerto Ricans and the Chicano descendants of Mexicans who became citizens when the U.S. conquered the Southwest from Mexico.

The problem with Douthat’s argument, of course, is that persecution and discrimination often lead to insularity, the opposite of assimilation, and resentful blowback. Decades of anti-Irish discrimination coupled with anti-Catholicism in the U.S. did not produce democratic assimilated Irish Americans for many generations. In fact, in the 1960s, some Irish Americans were raising money and running guns for the IRA.

And of course Douthat studiously ignores racism and slides over the current wave of anti-immigrant xenophobia. Are we to assume that black Americans should be grateful for the second-class citizenship they endured after the Civil War ended de jure slavery? How did that make them “better” Americans? How did that create the “unum” out of many??

In fact, segregation and second-class citizenship created not only the forward-looking NAACP but the retrograde nationalism of Elijah Muhammed’s Nation of Islam — a nationalism from which Malcolm X escaped only to be killed by members of that organization. The isolated hyper-ghettos created by the American system of Apartheid have led to a horrendous gap between poor, isolated, under-educated African Americans and both “average” white Americans and the rising achieving black middle class.

And how will demonizing and marginalizing “illegal immigrants” (who are all considered Latinos even though many are from Europe) make them better Americans? The isolation they experience due to persecution is a prescription for keeping them from becoming Americans.

And now, of course, some xenophobic nativists want to repeal the 14th Amendment granting citizenship to every baby born in the United States. Tell me, Mr. Douthat — how will that “encourage” them to assimilate?

The whole argument is crazy.

I urge everyone reading this to do everything they can to push back in favor of the First Amendment to the Constitution and against anti-Muslim bigotry. The only way to beat loud, disgusting hate speech is with louder, forthright GOOD speech.

9 Responses to Michael Meeropol : Islamophobia and the ‘Two Americas’