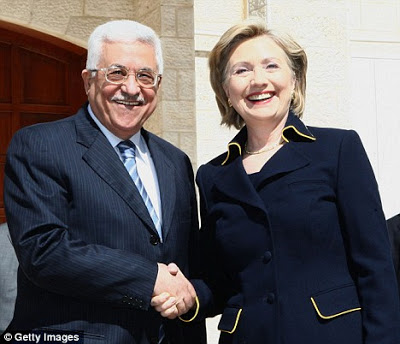 So now it’s Hillary Clinton who begins to shuttle, looking for that grail that has eluded all her predecessors, a final peace settlement between Israel and the Palestinians. Will things be different this time? According to former Senator James G. Abourezk, no — unless the Secretary of State can lay aside the “glaring double standard” that blinds us to the realities of the Middle East situation and makes a just peace unattainable.

It’s time for tough love with Israel, Abourezk is saying: there will be no peace settlement unless the U.S. tells Israel it must remove its settlements. Period.

One More Farcical Tour of the Middle East by a Secretary of State: This Time It’s Mrs. Clinton’s Turn
By James G. Abourezk / March 5, 2009

It was almost dreamlike, watching Secretary of State Clinton make her visit to Israel, one that can be called the first of many trips pretending to encourage peace talks between Israel and the Palestinians. It’s a dream I’ve had several times over; one needs only to simply fill in the names of the various U.S. Secretaries of State, say that they’ve met with the Israeli leadership and with Mahmoud Abbas, (who is about as popular with the Palestinians as Rush Limbaugh is with Democrats), and that no progress was made.

Aside from saying that Abbas heads the only legitimate government of Palestine, Mrs. Clinton did say that the building of new settlements was, “unhelpful,” or maybe it was the demolition of several Palestinian apartment blocks in Jerusalem that was unhelpful. It’s hard to remember which one did not help. She did conveniently forget that Abbas’ term as President of the Palestinian Authority has expired, and she also forgot that Hamas won the Parliamentary elections big time. It’s not that the Parliament has been meeting regularly, mostly because Israel arrested most of the Hamas members of Parliament, all of them still behind bars. It was the kind of election that the U.S. did not believe in. It was legal, and showed the preferences of the Palestinian public, something which the U.S. chose to ignore.

Mrs. Clinton did send two diplomats to talk to the Syrians, which is as hopeful as it is interesting. Syria has been on the bad, bad guy list since George W. Bush decided to act on Israel’s dislike of Syria and withdraw the U.S. Ambassador, Margaret Scobey. It was Syria’s support of US and Israeli-designated “terrorists” that caused that diplomatic rupture.

I had lunch in Damascus a few years ago with Ms. Scobey, who told me that the problem “we” had with Syria was that the country was not stopping insurgents from crossing into Iraq to fight the U.S. military. “Why don’t you just put American troops on the border to stop them?” I asked, “Why do you blame Syria for not policing the long border?’

“Well, we don’t have enough troops to do the job,” was her honest answer.

By publicly denouncing Syria, George W. accomplished his goal of making Israel happy, but he also trashed a valuable ally in his “war on terrorism.”

A few years ago, in the early part of Bush’s first term, I was in a meeting with Syria’s president Bashar al Asad. He mentioned that he had given the U.S. information he had uncovered on an attack planned by Al Qaeda on U.S. interests in the Middle East. That early warning allowed our people to disrupt the terrorists’ plans to do harm to us. (I assumed it was an attack planned on the U.S. Naval base in Bahrain, but I was never told exactly where it was). I saw the U.S. Ambassador, Ted Kattouf, shortly after that and asked him if it was true. His response was that, not only was it true, but Syria’s intelligence personnel had uncovered and had stopped more than one planned attack on Americans in the Middle East.

What a visibly irritated President Al Asad told me that day was that if George Bush continued to call Syria a “terrorist” country, he would never again give us warning of an attack.

News sources now tell us that Syria is playing around with the development of nuclear weapons. If that’s true, it’s not good news. But here again we are our own worst enemy with respect to nuclear proliferation. While our politicians loudly denounce Iran’s nuclear ambitions, nothing at all is said about Israel’s possession of over 200 nuclear warheads. The reason Israel’s nuclear arsenal should be openly discussed is that, not surprisingly, it is the cause of its neighbors’ drive to develop their own nukes. Self Defense is a powerful motivation.

When we look back at history, outside of Saddam Hussein’s Iraq, Israel is the only country in that neighborhood that has attacked its neighbors. Iran has not, in the last two or three hundred years, attacked anybody. Nor has Syria. Even Syria’s misadventure in Lebanon was the result of initially being invited into Lebanon to help settle the Civil War back in the 1970s, but it was not a real invasion, not like the ones Israel has specialized in. Syria’s sin was to clumsily overstay its welcome in Lebanon.

What is not widely known, (and one wonders why?) is that both Syria and Iran have proposed a “nuclear weapons free Middle East,” — proposals that were immediately scoffed at both by Israel and by the United States.

This double standard also applies to the Arab militias—Hizbollah and Hamas–that arm themselves to defend from Israel’s assaults on them and their freedoms. Calling Hamas and Hizbollah terrorist groups is, as Mrs. Clinton might say in another context, “unhelpful.” They are, under any definition, except for definitions by the U.S. and by Israel, “liberation groups.” They are trying to liberate their lands from foreign occupiers — namely Israel — an action which we here in the U.S. normally applaud. But Israel has asked our government to identify them as terrorist groups, which our government happily did. Doing Israel that favor was very much like the favor done by Bush’s invasion of Iraq, which was greatly encouraged by Israel’s fear of Iraq’s policies toward them. Of course, the influence of the neocons in the Bush Administration made the decision to go to war much easier to make.

The double standard is so glaring that it would be embarrassing if the American public were ever made aware of it. President Obama is now on record as supporting a multibillion dollar arms gift to Israel over the next ten years. Both Israel and the U.S. decry — in the loudest terms –arms being slipped into Gaza so the people there can defend themselves. The same is true for Hizbollah. Much is made about weapons “smuggling” to Hizbollah, which, like Hamas, does whatever it can to defend their people from Israel’s armed might. But American politicians and American journalists dutifully read Israeli talking points when the time comes to explain their feelings. Hamas’ crude weapons do not quite match the fighter jets, modern tanks, pilotless drones, cluster bombs, phosphorous shells and bombs that Israel inflicted on the civilians in the Gaza Ghetto. The new DIME weapon, which severely burns anything it touches, was particularly effective when used on the civilians of Gaza.

The most prominent talking point handed out by the Israeli propaganda machine during the assault on Gaza was, “We would not stand by and allow our families be targets of someone shooting rockets into our cities.”

Totally unexamined, that was a brilliant piece of propaganda explaining the slaughter of some 1,500 people in Gaza, most of them women and children. Like the Nazis trying to eradicate the Warsaw Ghetto, Israel willfully and deliberately slaughtered civilians who were unable to escape because of the fences that surrounded them. When they were caught doing so, the Israeli military merely said it would investigate. Nothing has ever come from such an investigation, if, in fact, it was ever investigated.

It is embarrassing to see the Lobby for such a small country cause our politicians to quake in their boots. Despite all the demolitions of Palestinian homes, despite the expansion of the settlements in occupied territories, despite the devastating invasions of Lebanon in 1982 and in 2006, the brutal invasion of the Gaza ghetto last year, and despite the holding of thousands of Palestinians in their prisons, most without benefit of charges or trials, we hear not one word of criticism from our Congress or our President. Amazing, is it not?

I have said this before, but it bears repeating—there will be no peace deal between Israel and the Palestinians unless and until the President of the United States tells Israel that they must remove the settlers from the West Bank, thereby allowing a Palestinian state to be formed. If he does not do that, Mrs. Clinton and George Mitchell will tire themselves out traveling to the Middle East under the pretense that they are sponsoring peace talks.

[James G. Abourezk is a lawyer practicing in South Dakota. He is a former United States senator and the author of two books, Advise and Dissent, and a co-author of Through Different Eyes. This article also runs in the current issue of Washington Report For Middle East Affairs. Abourezk can be reached at georgepatton45@gmail.com.]

2 Responses to Middle East Peace: Probably Not This Year