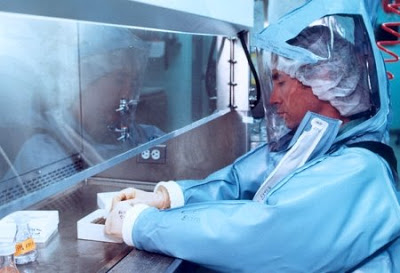 Czech newspapers are questioning if the shocking discovery of vaccines contaminated with the deadly avian flu virus which were distributed to 18 countries by the American company Baxter were part of a conspiracy to provoke a pandemic.

The claim holds weight because, according to the very laboratory protocols that are routine for vaccine makers, mixing a live virus biological weapon with vaccine material by accident is virtually impossible.

Baxter flu vaccines contaminated with H5N1 – otherwise known as the human form of avian flu, one of the most deadly biological weapons on earth with a 60% kill rate – were received by labs in the Czech Republic, Germany, and Slovenia.

Initially, Baxter attempted to stonewall questions by invoking “trade secrets” and refused to reveal how the vaccines were contaminated with H5N1. After increased pressure they then claimed that pure H5N1 batches were sent by accident. This was seemingly an attempt to quickly change the story and hide the fact that the accidental contamination of a vaccine with a deadly biological agent like avian flu is virtually impossible and the only way it could have happened was by wilful gross criminal negligence.

According to a compiled translation from Czech newspaper stories, the media over there is asking tough questions about whether the contamination was part of a deliberate attempt to start a pandemic.

“Was this just a criminal negligence or it was an attempt to provoke pandemia using vaccination against flu to spread the disease – as happened with the anti-B hepatitis vaccination with vaccines containing the HIV virus in US? – and then cash for the vaccines against H5N1 which Baxter develops? How could on Earth a virus as H5N1 come to the ordinary flu vaccines? Don’t they follow even basic precautions in the american pharma companies?” states the translation.

The fact that Baxter mixed the deadly H5N1 virus with a mix of H3N2 seasonal flu viruses is the smoking gun. The H5N1 virus on its own has killed hundreds of people, but it is less airborne and more restricted in the ease with which it can spread. However, when combined with seasonal flu viruses, which as everyone knows are super-airborne and easily spread, the effect is a potent, super-airbone, super deadly biological weapon.

As the Canadian Press article explains, “While H5N1 doesn’t easily infect people, H3N2 viruses do. If someone exposed to a mixture of the two had been simultaneously infected with both strains, he or she could have served as an incubator for a hybrid virus able to transmit easily to and among people.”

There can be little doubt therefore that this was a deliberate attempt to weaponize the H5N1 virus to its most potent extreme and distribute it via conventional flu vaccines to the population who would then infect others to a devastating degree as the disease went airborne.

The Canadian Press article states, “That mixing process, called reassortment, is one of two ways pandemic viruses are created,” but then claims that there is no evidence that this is what Baxter were doing, despite there being no clear explanation as to why Baxter has samples of the live avian flu virus on its premises in the first place.

However, to reiterate, the key aspect of this story is that it is virtually impossible for live avian flu virus to find its way into a vaccine by “accident”.

As health expert Mike Adams points out, “The shocking answer is that this couldn’t have been an accident. Why? Because Baxter International adheres to something called BSL3 (Biosafety Level 3) – a set of laboratory safety protocols that prevent the cross-contamination of materials.”

As explained on Wikipedia:

“Laboratory personnel have specific training in handling pathogenic and potentially lethal agents, and are supervised by competent scientists who are experienced in working with these agents. This is considered a neutral or warm zone. All procedures involving the manipulation of infectious materials are conducted within biological safety cabinets or other physical containment devices, or by personnel wearing appropriate personal protective clothing and equipment. The laboratory has special engineering and design features.”

Under the BSL3 code of conduct, it is impossible for live avian flu viruses to contaminate production vaccine materials that are shipped out to vendors around the world.

This leaves only two possibilities that explain these events:

Possibility #1: Baxter isn’t following BSL3 safety guidelines or is so sloppy in following them that it can make monumental mistakes that threaten the safety of the entire human race. And if that’s the case, then why are we injecting our children with vaccines made from Baxter’s materials?

Possibility #2: A rogue employee (or an evil plot from the top management) is present at Baxter, whereby live avian flu viruses were intentionally placed into the vaccine materials in the hope that such materials might be injected into humans and set off a global bird flu pandemic.

Spreading bird flu would create an instantaneous surge of demand for bird flu vaccines. The profits that vaccine companies such as Baxter International could reap out of such a panic are astronomical.

In addition, as we have previously reported, those that have a stake in the Tamiflu vaccine include top globalists and Bilderberg members like George Shultz, Lodewijk J.R. de Vink and former Secretary of Defense Donald Rumsfeld.

Authorities in both Europe and the U.S. have openly detailed plans for martial law, quarantine and internment should a bird flu pandemic occur.

The other motivation, as we have exhaustively documented on this website for years, is the fact that elites throughout history have openly stated that they want to see a world population reduction of around 80 per cent. Shocking stories like this take the plausibility of that narrative out of the realms of conspiracy theory and into the dangerous reality of conspiracy fact.

“Baxter is acting a whole lot like a biological terrorism organization these days, sending deadly viral samples around the world. If you mail an envelope full of anthrax to your Senator, you get arrested as a terrorist. So why is Baxter — which mailed samples of a far more deadly viral strain to labs around the world — getting away with saying, essentially, “Oops?”, Adams concludes.

This is not the first time that vaccine companies have been caught distributing vaccines contaminated with deadly viruses.

In 2006 it was revealed that Bayer Corporation had discovered that their injection drug, which was used by hemophiliacs, was contaminated with the HIV virus. Internal documents prove that after they positively knew that the drug was contaminated, they took it off the U.S. market only to dump it on the European, Asian and Latin American markets, knowingly exposing thousands, most of them children, to the live HIV virus. Government officials in France went to prison for allowing the drug to be distributed. The documents show that the FDA colluded with Bayer to cover-up the scandal and allowed the deadly drug to be distributed globally. No Bayer executives ever faced arrest or prosecution in the United States.