Military Buildup in Colombia : A Rumor of War 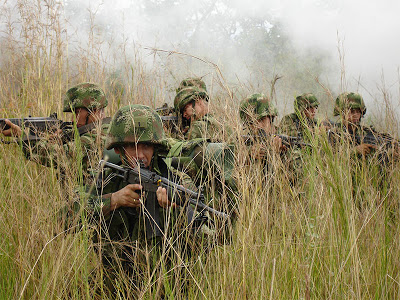 Colombian army soldiers shown during training exercises. Photo from Wikimedia Commons.
A rumor of war:
Shadows of Vietnam in Colombia

CARTAGENA DE INDIES, Colombia — I borrowed the title of this post from Lt. Philip Caputo’s excellent book covering the U.S. Marines’ first six months in Vietnam, not only because I like the title, but I also see some correlation between his story and the story of our troops now being written in the jungles of Colombia.

As in Caputo’s war, death, destruction, and mayhem were preceded by, first, a troop build-up, and then, small skirmishes which were the precursors to all-out war.

A build-up on all sides has been going on here since the military pact of October 30 was signed in Bogota between the U.S. government and the Colombians. In early November, the first shots were fired along the border. Within days of the signing and the beginning of the U.S. troop invasion of Colombia, tensions between Colombia and Venezuela flared, when the bodies of nine Colombians believed to have been executed by an illegal armed group were found on the Venezuelan border state of Tachira.

At the same time, Venezuela announced the capture of two Colombians and a Venezuelan accused of spying for Colombia’s Administrative Security Department (DAS). Venezuelan Interior Minister Tarek El Aissami presented documents allegedly originating from DAS showing that Colombia had sent spies to Venezuela, Ecuador, and Cuba as part of a CIA operation.

The very next day, the Venezuelan government ordered the closure of the border between Tachira State and Colombia after two members of its Bolivarian National Guard (GNB), on routine duty at the Palotal checkpoint, were shot dead.

According to a report by the Venezuela TV (V-TV) correspondent in the area, a group of four gunmen suddenly appeared at the border post and shot Sergeant Major Gerardo Zambrano and First Sergeant Buyssi Semidy Segnini Lopez in the back.

Then, Venezuelan Vice President and Defense Minister Ramón Carrizales claimed that he had evidence the nine Colombians kidnapped and assassinated a week earlier in Venezuelan territory were part of a “paramilitary infiltration plan” aiming to destabilize the socialist government of President Hugo Chavez.

Venezuela ordered 15,000 more troops to the state of Tachira, adding to 6,000 already there for a total of 21,000 known Venezuelan troops. Colombia, not to be outdone, and emboldened by the backing of their Yankee partners, formed a whole new Army division, the Colombian 8th Infantry Division, now stationed on the Venezuelan border in Yopal, in the Departamento (state) of Casanare. With the addition of the 8th, Colombia now claims 69,000 combat troops on the border.

Colombia says its build-up is in response to the growing number of Fuerzas Armadas Revolucionarias de Colombia — Ejército del Pueblo, (FARC or FARC-EP; Revolutionary Armed Forces of Colombia — Peoples Army) camps across the border, which has led to an increase in FARC activity on the Colombian side.

It may be remembered that Colombia invaded Ecuador last March to kill an encampment of FARC soldiers. A recently released Ecuadoran investigation has revealed that the attack was planned and assisted by U.S. troops and spies at the U.S. airbase at Manta, Ecuador. The base was subsequently closed to U.S. forces in June. Then-president Bush and presidential candidates Hillary Clinton and Barack Obama hailed the Colombian invasion as “necessary.”

Colombia’s military isn’t prepared for an attack by its neighbor Venezuela, according to a classified Colombian government report leaked to news station CM&. The report says Colombia can’t defend itself if Chavez decides to attack, especially lacking anti-tank capacity to deter a ground attack in the flat and relatively accessible northern part of the country . Venezuela has concentrated its tank capacity there and, in case of an attack, a Venezuelan offensive would take place there. Colombia’s Defense Ministry also admits its ports on both the Caribbean and Pacific coasts are “highly vulnerable.”

In late December, the FARC-EP and the Ejercito de Liberacion Nacional, (ELN; the National Liberation Army), the second largest guerrilla force in Colombia, apparently joined forces after years of criticizing each others’ methods of revolutionary war. The ELN follow the Che model of foco organization and conduct sabotage principally against Colombian oil pipelines. Between 1986 and 1997 the ELN was responsible for 636 pipeline bombings resulting in $1.5 billion in lost revenue for the state-owned oil company, the oddly named Ecopetrol.

The two guerrilla armies made public a joint communiqué, saying, among other things:

Please note that we have met in an atmosphere of brotherhood and camaraderie that has allowed us to discuss with sincerity and transparency an analysis of the current moment, the outlook and commitment to assist us as revolutionaries. We also addressed the difficulties that have arisen between the two organizations.

Capitalism is in crisis. The rule, and as always, their solution is through overt war, and in this way increase the occupation troops in Afghanistan by sending tens of thousands more to join existing ones. Today Colombia is converted into a military base at the U.S. disposal, to drown in blood the resistance of our people and seek to reverse the new pride in our America that rides along the valleys and mountains. In response, we urge a rescue of the banner of peace in Colombia as a commitment to the continent.

Understanding the needs of the moment of our revolutionary condition leads us to order all our units:

Our only enemy is U.S. imperialism and its lackey oligarchy; against them we will commit all our revolutionary fighting energy.

For the FARC-EP: Secretariat of the Central
For the ELN: Central Command
Mountains of Colombia, November 2009

Last, there is news of the effects of your tax dollars and your troops on the belligerence of the Colombians. Their announcement of more military preparations, and progress report on what has been done so far, can only be called, “A rumor of war.”

El Universal, a Cartagena daily paper, reported on December 19 the creation of seven new Army battalions to strengthen national security, one in the department of Guaviare (south), two in areas bordering Venezuela, and four at two of the bases that will also be used by U.S. troops under a controversial military agreement recently by the two countries. COLAR has also sent another brand new division, the 8th Infantry, to the same border area.

Along with the new Army units, six air battalions of C-130 carriers and a seventh rigged for special operations were announced. With this addition, the Colombian Air Force (COLAF) will become “one of the largest and best trained in Latin America”, the Army said in a statement.

“We’ve received strategic equipment and aircraft for defense and homeland security, with which we are improving our responsiveness,” said National Army commander General Oscar Gonzalez Pena in an official ceremony at Ptolemais airbase (central) inaugurating two of the new battalions.

Meanwhile, at Larandia base (south), also included in the agreement with the U.S., another new aviation unit was activated.

The agreement with the U.S. has caused a crisis for months between Colombia and Venezuela, since the latter’s president, Hugo Chávez, is considered a “threat” to Colombia’s security. Two of the new COLAF battalions were activated in the departments of La Guajira and Arauca along the border with Venezuela.

There is also a project to expand and improve another small military base in La Guajira, “whose capacity would increase from the 50 soldiers who are there now to between 800 and 1, 000,” the Colombian defense minister, Gabriel Silva, announced.

The news release ending by stating that on the border between Colombia and Venezuela in recent weeks several violent incidents have occurred, causing more than a dozen deaths.

The last line of this otherwise pro forma military announcement of troop creation and movements seems like an afterthought, but may well be the first of a long list of “body counts.” 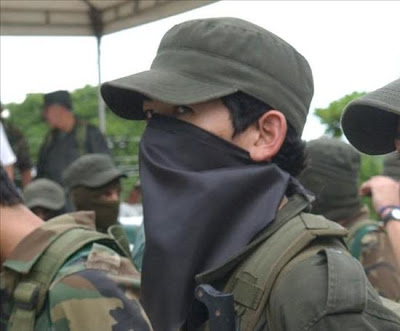 Colombian Defense Minister Gabriel Silva says that COLAR is now ready to attack guerrilla bases in other countries, coinciding with the claim that some leaders of the Revolutionary Armed Forces of Colombia (FARC) would be in Venezuelan territory. On the eve of the New Year, he released a document prepared by his ministry proposing to strengthen and modernize Colombia’s weaponry, to deal with the “aggression” of foreign countries that have “ideological and territorial expansionist aspirations” that threaten Colombia.

A militaristic policy appears to thrive in Colombia regardless of what, at least publicly, Presidente Álvaro Uribe says. Without contradicting directly the statement of his Defense Minister, Presidente Uribe has argued that, “I do not authorize, and I say very clearly, as I am president of the country, I do not have a strategy, a course of international aggression.”

Silva, however, hinted that he does not rule out a possible attack on a guerrilla base in Venezuela. Commenting on Venezuelan allegations that Colombia is preparing an attack similar to the one in Ecuador in March 2008 that killed Raúl Reyes, 20 other guerrillas, and visitors to the FARC camp, Silva said that Venezuelans need only worry if there is a guerrilla presence in Venezuela.

It should be noted that, during last year’s campaign, both presidential candidates — Obama and Hillary Clinton — approved of the Colombian invasion of Ecuador as “necessary.”

The number of U.S. troops embedded with the Armed Forces of Colombia has been growing steadily since the ’50s, and even faster in the ‘90s, although all agree that the ability of the surviving guerrillas (FARC and ELN) has decreased.

Neighboring countries Venezuela, Ecuador, and Panama have armed forces greatly inferior in number. Venezuela barely has 60,000, and lacks the preparedness of the Colombian military that has been active in counterinsurgency since the ‘50s.

Moreover, since the implementation of Plan Colombia in August, 2000, for which the U.S. provides equipment, support, intelligence advisors, mercenaries, training, and consultants in the field, the Colombian armed forces had received, through late 2008, some $6 billion in military aid, as well as gains from a “war tax” on the country’s largest fortunes. In the coming year, this tax alone will raise $1 billion for continued military expansion.

2 Responses to Military Buildup in Colombia : A Rumor of War