Military Reports on Reporters: ‘Like Perusing the Diary of Your Stalker’ 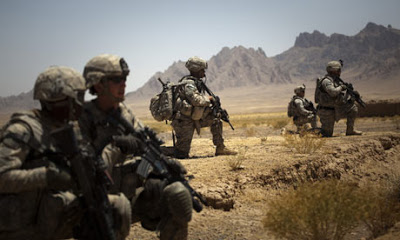 A photograph of US soldiers near Kandahar, Afghanistan, taken by the embedded AP photographer Emilio Morenatti the day before he lost a foot in a roadside bombing. Photo: Emilio Morenatti/AP.
US Military Investigates Afghan Desk
By P.J. Tobia / August 28, 2009

This article from Stars and Stripes has a lot of journalists talking. It is about The Rendon Group, a company that puts together background briefs on reporters who apply for embeds with the US military in Afghanistan.

Most reporters in Afghanistan know about these reports. I obtained a copy of my Rendon report about three months ago from a friend in the military and I’ve posted excerpts below. I don’t really think the reports are some kind of violation, in fact, I think the military is smart to look into the background’s of people who will be writing about them. Rating the coverage that reporters give the military – ”positive,” “neutral,” “negative” – seems a bit silly and slightly Orwellian, but if thousands of reporters were covering my organization, I would want a simple shorthand to indentify them as well.

I do think the reports are creepy though. These guys have read almost everything I’ve written in the last few years, even interviews I’ve given to local news blogs. Reading this report is like perusing the diary of your stalker. Rendon also classifies certain publication as “left leaning” which I find odd.

Most troubling by far is that when S&S asked the military about Rendon, they denied the existence of these reports. I’m holding one of these reports in my hand right now, trust me, it exists. I’ve also met people who work for The Rendon Group in Kabul. In conversations, they deny that there is any nefarious objective to what they do. “We just help the military figure out what embed is right for a particular reporter,” one Rendon employee told me over drinks. “If a reporter is classified as “negative” they are less likely to go where the action is and more likely to be covering a platoon that guards sandbags in Herat.”

I’ve quoted the best parts of my Rendon report below for your reading pleasure. This was my second report, generated after my second embed (in Wardak) and before my third (in Kandahar.) I bolded some of the good parts and put links to the stories they reference.

The purpose of this memo is to provide an updated assessment of P.J. Tobia, and give a profile of his work, both through a summary of content and analysis of style, in order to gauge the expected sentiment of his work while on an embed mission in Afghanistan…

UPDATE to analysis below:

Tobia’s work resulting from his most recent embed was an in-depth article for The Philadelphia Inquirer on joint US, French and ANA operations in Wardak. The article followed Lt Eric Schwirian and his efforts to train ANA soldiers who, if properly strengthened, are the coalition’s ticket out of Afghanistan. His article for Philadelphia Inquirer was more straightforward than his previous work.

Tobia was more sympathetic and less critical of the US Military in his most recent report as evidenced by his quote selection: “We’re here to keep the Afghan people safe.”

Tobia continues to humanize US soldiers by quoting mainly US Military personnel and detailing the soldiers’ backgrounds, homes and reaction to fighting in Afghanistan.

His most recent article is neutral-to-positive while his previous work has been neutral or neutral-to-negative.

In an interview, he decried the acid attacks and human rights violations toward Afghan women in particular…

[Tobia’s] articles on Afghanistan focused on multiple topics that included, narcotics use, detainee abuse, the ‘hearts and minds’ mission, the development of the ANSF as well as the overall cost of the US mission in Afghanistan. He produced two articles that were originally published in The Washington Post and Nashville Scene but were later picked up by New York’s left leaning Village Voice and Florida’s New Times.

…It should be noted that his [Village Voice] article was titled “Afghaniscrewed: How I Spent My Fall Vacation.”

He writes with an outside observer’s perspective, but his articles show he can identify and empathize with US troops.

Based on his previous embed and past reporting, it is unlikely that he will miss an opportunity to report on US military missteps. However, if following previous trends, he will remain sympathetic to US troops and may acknowledge a learning curve in Afghanistan.

Considering his previous embed, it is likely that he will produce articles that may be picked up by a number of publications.

In light of his previous style and previous coverage, it is likely that he will write long feature articles that address several current Afghan issues in relation to troops he has contact with.

This entry was posted in RagBlog and tagged Investigative Journalism, Military, Military Cover-ups. Bookmark the permalink.

1 Response to Military Reports on Reporters: ‘Like Perusing the Diary of Your Stalker’