Minsinformation and the Economy : The Games Republicans Play 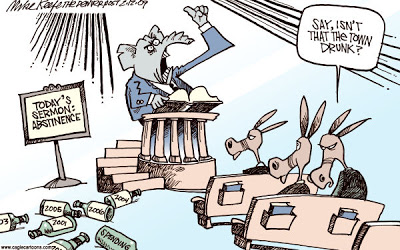 The independents are jumping ship…
Republican misinformation and economic reality

By persistent obstructionism and using endless false information, the GOP pulled off some big wins in the 2009 elections. Worse still, they have been able to convince people that Obama has handled the economy badly. The YouGov poll shows that 47% disapprove of Obama’s handling of the economy, while 43% approve.

The biggest problem is that the independents who supported Obama are deserting in big numbers. One reason for this is that unemployment is getting worse, and is now at 10.2%, somewhere around 17% when we take into account all the gimmicks that are employed to keep the figure artificially low. We think that it will be 9.5% next November, around 15% in real terms. That does not bode well for the Democrats in next year’s elections.

The most recent Rasmussen poll shows 49% of respondents blaming George H. W. Bush for the bad economy; 45% blame President Obama. The tendency has been for the number blaming Bush to sharply decline, while the number of those blaming Obama are increasing. One third of likely voters thought the stimulus was doing some good.

Republican columnist Peggy Noonan tells us that voters think deeply about the issues and follow the news carefully. She says the public cannot be easily manipulated. No sane, and rational person could conclude the economy Obama inherited was not all that bad or that he could be expected to fix it in less than ten months.

Even granting the public’s impatience, it is hard not to conclude that the Democrats have not effectively communicated with the public about the economy. The Republicans have shown far better message control. The lies they have been endlessly repeating are not particularly clever. But they are effective because they play to people’s desire for simplistic answers and they fit a childlike view of economics that the Republican information machine has sold the American people for more than three decades.

The more astute Republican spokesmen concede that the downturn began under Bush but insist that Obama should not have sought the presidency if we were unable to administer a quick fix. That they are justified in blaming Obama for lost jobs and the slow recovery. Their false assumption is that all recessions are the same and can be fixed easily.

This simple fact is that Obama inherited a financial system that had almost fallen apart and an economy on the verge of depression. Even now the financial system is so shaky that the banks are still hoarding money. As long as they continue not lending, employers will not be able to borrow money to expand production. Anyone can understand that, and the Democrats had better be making these simple points at every opportunity.

John Boehner, the typical Republican spokesman, continually asks “Where are the jobs?” though there has not been enough time for Obama’s policies to work. Then he says that all the stimulus money has been spent and has accomplished nothing. The fact is that $500 billion still has not been committed and much of the remainder is just getting into the pipeline. Republicans have vastly inflated the amount of debt incurred under Obama. The amount of the Stimulus was $787 billion, but the Republicans have been saying it was $ 1 or 2 trillion and no one corrects them. This man consistently generates so much misinformation that someone in the House leadership should be detailed to answer Boehner’s distortions and lines.

Representative Jack Kingston of Georgia boiled down the Republican argument to this simple lie: “Let’s remember the Pelosi plan for jobs: an $800 billion stimulus plan that caused unemployment to go from 8.5% to over 10%.” How anyone can believe the plan created unemployment — and in such a short time — challenges the imagination. Of course, one might suggest that such arguments were pitched to people still unhappy that a black man is in the Oval Office.

Democrats must answer Boehner and Kingston by noting that the Republicans offer no jobs plan other than tax cuts for the wealthy and blocking efforts to stimulate the economy. We Democrats have a plan, and it is beginning to work by reducing the number of lost jobs. It may not create jobs as quickly as we want because the deep economic problems are rooted in a system the GOP created and defended. It cannot be changed overnight.

Obama’s policies helped saved us from another depression. Yet he is being blamed for not working miracles. He inherited the worst sort of recession — one with very high unemployment, which is followed by very slow recovery of jobs. The financial system he inherited is a basket case, and it will take years to fix it. Only in the United States, among advanced countries, would a president and his party be punished for heading off a depression and not producing an impossible economic miracle. That is because the level of our political discourse is so low, our voters so uninformed, and our mainstream media so unprofessional.

Now many people believe the wild claims about “socialism” and losing their liberties, and Democrats ruining the economy, because they have almost no conceptual framework with which to view the economy. For decades they have been taught that invisible economic laws operate the economy and that government must interfere with those laws. A careful study of these market forces in reference to CEO compensation might raise questions about this.

Recently CEOs were getting huge bonuses while stockholders were taking it on the chin. What happened? Did market forces find a shortage of bad CEOs and choose to heap vast rewards on the bad ones? Lack of regulation produced the financial crisis, and now the Republicans are trying to weaken the proposed new rules. They are even fighting the creation of a new agency to protect loan consumers. Is that because the banks were so fair with customers in the past?

A good economist will tell you that economic actors always try to lower their exposure to risk. That is why there are monopolies and why energy companies in some states reach informal agreements not to compete with one another. It explains why state insurance commissions end up in the hip pocket of the industry and approve great rate hikes when the portfolios of the companies go south. That is why people have always been trying to game the system.

The CEO appoints the compensation board to make sure he gets an enormous compensation package. Financiers like Bernie Madoff found other ways to make the system work for them. Former Republican Senator Phil Gramm found a way to so rig the markets in derivatives that he got richer while many of us lost a good chunk of our savings. Yes, some Democrats like Bill Clinton went along with him, and they should be doing penance. So much for the market fundamentalism that led us to near disaster!

Jacoby compares the current political atmosphere to the period when Joseph McCarthy was difficult to challenge. Now as then, there was a headlong flight from reason and a distrust of rational arguments. Reason, history, and facts have become dirty words. The level of political discourse has been so debased that we might be approaching the point when intelligent exchange of ideas is nearly impossible. Emotions and irrationalism were powerful forces. McCarthyism passed after a brief period of dominance, but now, half a century later, people in the conservative think tanks have figured out how to quickly generate such periods of hysteria and to prolong them when they think it necessary.

Susan Jacoby noted that it was not the secrecy surrounding the Clinton health care plan that accounted for its demise. Rather, the Democrats had failed to prepare and educate voters on what the Clinton plan would involve. They should have anticipated simplistic Republican complaints and lies and used facts to help voters see through Republican appeals to emotions and fear. With little good information at their disposal, many average Americans believed the Harry and Louise claims against Clinton care.

Democrats need to inject reason into this poisonous atmosphere, and they must remember that they lack a fair MSM or a vast network of well-funded think tanks to educate the public and prepare the public for progressive initiatives. They need not focus on the Republican base; those folks are not open to persuasion. There are thinking independents out there who can be reached with reason and facts.

Democrats will need to learn a few things about message control and to draw upon the expertise of people in cognitive science like George Lakoff. If Democrats cannot seize the initiative in the national discourse, we could well see a president Sarah Palin and a cabinet stuffed with tea baggers like Dick Armey in 2013.

3 Responses to Minsinformation and the Economy : The Games Republicans Play