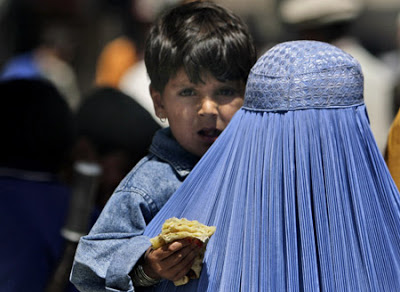 Afghan mother and child. Photo from Center for American Progress.
U.S. ranking not so good…
Reporting on the status of mothers

The dreadful circumstances of so many of the world’s mothers and children on this Mother’s Day are preventable. There is enough money in this world, and technology, talent, and trained people, to alleviate these conditions.

On Mother’s Day 2010, what are the best countries in which to be a mother on the basis of the exacting “Mother’s Index” compiled annually by the prestigious international organization Save the Children? You may be surprised.

This year’s “State of the World’s Mothers,” released May 3 at Save the Children headquarters in Fairfield, Conn., weighs such matters as lifetime risk of maternal death, contraceptive use, female life expectancy at birth, expected number of years of formal education for females, maternity leave benefits, ratio of male/female earned income, participation of women in national government, child mortality rate (per 1,000 births), among other factors.

The Save the Children report notes that “Every year, 50 million women in the developing world give birth with no professional help and 8.8 million children and newborns die from easily preventable or treatable causes.” The organization stresses “the critical shortage of health workers in the developing world and the urgent need for more female health workers to save the lives of mothers, newborn babies and young children.”

The United States was number 28 in terms of “the best place to be a mother” in the More Developed Countries, behind nearly all the states in Western and Central Europe and, of course, Scandinavia. Canada was number 20. Greece, Latvia, Austria, and Croatia were the four countries just ahead of the United States.

Dragging down the U.S. ranking are several factors. The American government is the least generous of the 43 More Developed Countries in terms of maternity leave benefits (12 weeks leave, unpaid). No other country provides so little time off after childbirth and only four others do not offer paid leave. The rest pay more benefits for longer leaves. France, for instance, pays full salary for 14 weeks maternity leave, Denmark pays full salary for 52 weeks, Ireland 80% of usual salary for 26 weeks.

Another factor is America’s relatively high rate of lifetime risk of maternal death (1 in 4,800). As USA Today pointed out “A woman in the United States is more than five times as likely as a woman in Bosnia and Herzegovina, Greece or Italy to die from pregnancy-related causes in her lifetime and her risk of maternal death is nearly 10-fold that of a woman in Ireland.” (Ireland has the best ratio in the world — one mother dies in 47,600 births.)

Further, the rate of infant mortality (below age five), 8 per 1,000 births in the U.S., may be lower than that in most of the Less and Least Developing Countries, but it is higher than most countries in its own category. For example, in Serbia it is 7 per 1,000, in the UK it’s 6, in the Netherlands 5, the Czech Republic 4. The world’s lowest rating, 3 deaths per 1,000 births, has been attained by Sweden, Finland, and tiny Luxembourg.

In Cuba, which led the Less Developed Countries, the infant mortality rate is 6 per 1,000, an amazing statistic for a relatively poor developing country. In other Latin American societies the figure is often much higher: Argentina, 16 per 1,000, Brazil 22, Mexico 17.

The U.S. has imposed deep economic, trade and political sanctions on Cuba for over 50 years, which certainly weakens its smaller neighbor, but Cuba has managed to provide good medical care for all women, 19 years of formal schooling for females, compared to 16 for its nemesis to the north, and for women to occupy 43% of seats in the national government compared to 17% in Uncle Sam’s legislature. Health care and eduction through college are free in Cuba.

It is generally within the Least Developed Countries, which are also the poorest, where the world’s mothers suffer the most, though this is not always the case. The worst place in the world for women is Afghanistan, which has been occupied and controlled by the United States and its puppet government in Kabul for nearly nine years. With token exceptions, virtually all of Washington’s efforts and money have focused on war and politics, with the people left to fend for themselves, and the condition of women and girls generally improving little if at all since the days when the Taliban ruled Afghanistan.

According to the State of the World’s Mothers:

Conditions for mothers and their children in the bottom 10 countries are grim. On average, 1 in 23 mothers will die from pregnancy-related causes. One child in 6 dies before his or her fifth birthday, and 1 child in 3 suffers from malnutrition. Nearly 50% of the population lack access to safe water and only 4 girls for every 5 boys are enrolled in primary school.

The gap in availability of maternal and child health services is especially dramatic when comparing Norway and Afghanistan. Skilled health personnel are present at virtually every birth in Norway, while only 14% of births are attended in Afghanistan. A typical Norwegian woman has more than 18 years of formal education and will live to be 83 years old; 82% are using some modern method of contraception, and only 1 in 132 will lose a child before his or her fifth birthday.

At the opposite end of the spectrum, in Afghanistan, a typical woman has just over 4 years of education and will live to be only 44. Some 16% of women are using modern contraception, and more than 1 child in 4 dies before his or her fifth birthday. At this rate, every mother in Afghanistan is likely to suffer the loss of a child.

Zeroing in on the children’s well-being portion of the Mothers’ Index, Sweden finishes first and Afghanistan is last out of 166 countries. While nearly every Swedish child — girl and boy alike — enjoys good health and education, children in Afghanistan face a 1 in 4 risk of dying before age 5. Nearly 40% of Afghan children are malnourished and 78% lack access to safe water.

The dreadful circumstances of so many of the world’s mothers and children on this Mother’s Day are preventable. There is enough money in this world, and technology, talent, and trained people, to alleviate these conditions. Every year, trillions of dollars are invested in destructive wars or are accumulating in the bank accounts of the super rich. An annual portion of these funds is all that is required to greatly reduce the unnecessary annual deaths of millions of children, and to provide health care and education for all the mothers of the world and their beloved offspring.