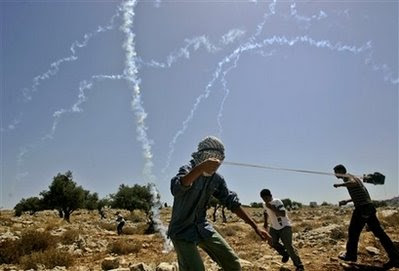 NILIN — The window through which Salam Amira, 16, filmed the moment when an Israeli soldier shot from close range a handcuffed and blindfolded Palestinian detainee has a large hole at its centre with cracks running in every direction.

“Since my video was shown, the soldiers shoot at our house all the time,” she said. The shattered and cracked windows at the front of the building confirm her story. “When we leave the windows open, they fire tear gas inside too.”

Her home looks out over the Israeli road block guarding the only entrance to the village of Nilin, located just inside the West Bank midway between Jerusalem and Tel Aviv. It was here that a bound Ashraf Abu Rahma, 27, was shot in the foot in July with a rubber bullet under orders from an Israeli regiment commander.

The treatment of the family stands in stark contrast to the leniency shown to the soldier and his commander involved in that incident.

B’Tselem, an Israeli human rights group, has accused the Israeli army of seeking “revenge” for the girl’s role in exposing the actions of its armed forces in the West Bank.

It may also be hoping to dissuade other families from airing similar evidence of army brutality, particularly since B’Tselem began distributing dozens of video cameras to Palestinians across the West Bank.

Scenes captured on film of hooded settlers attacking Palestinian farmers near Hebron came as a shock to many early this summer.

The village of Nilin has been the focus of the Israeli army’s actions since May, when its 4,700 inhabitants began a campaign of mainly non-violent demonstrations to halt the building of Israel’s separation wall across their land.

After the wall is completed, the village will be cut off from 40 per cent of its remaining farmland, effectively annexing it to half a dozen large Jewish settlements that encircle Nilin. The settlements are all illegal under international law.

Several times a week the villagers, joined by small numbers of Israeli and international supporters, congregate in olive fields where bulldozers are tearing up the land to make way for the wall.

The people of Nilin have tried various non-violent forms of protest, including praying in the path of the heavy machinery, using mirrors to reflect sunlight at the construction workers, banging pots and pans, and placing rocks in the way of the bulldozers during the night.

The army has responded with tear gas and stun grenades, as well as on occasion, with rubber-coated steel bullets and live ammunition. Last month it was reported that Israel was also experimenting with a new crowd dispersal method called “skunk”, which involves firing a foul-smelling liquid at demonstrators.

In the past few weeks, two youngsters have been shot dead by the army, including one, Ahmed Moussa, who was 10. The army claimed he was throwing stones. An autopsy showed he was hit in the head by a bullet from an M-16 rifle.

This week a soldier fired from close range three rubber bullets at Awad Surur, a mentally disabled man, as he tried to prevent his brother from being arrested. Two bullets penetrated his skull, according to B’Tselem, which denounced the army as increasingly “trigger-happy” and “reckless”.

Salam’s family, like many other villagers, bear the injuries from attendance at protests. Most of her five brothers have been hit by rubber bullets, as has her father, Jamal Amira, 53. The army has sealed the village off on several occasions and, according to villagers, beaten and terrorised inhabitants.

Mr Amira is among at least 100 farmers whose livelihoods will be devastated by the wall. He will lose all 14 hectares of his land, fields on which his ancestors have made their living by growing olives, cucumbers, aubergine and tomatoes.

But Salam’s five-minute film of the roadblock incident, taken during a four-day curfew imposed on the village, has only intensified the family’s troubles.

Three days after the video was aired, the army arrested her father during a peaceful protest. He was the only one seized after the army claimed the demonstrators had entered a closed military zone. Mr Amira was also charged with assaulting a soldier.

He was held for three and a half weeks before an Israeli military judge rejected the army’s demand that he be remanded for a further three months until his trial.

In an almost unprecedented rebuke to the prosecution, the judge questioned the army’s case, saying he could see no evidence of an assault. He also asked why Salam’s father was singled out from all of those protesting.

Mr Amira’s lawyer, Gabi Laski, said the decision confirmed “our preliminary claim that the arrest was out of vengeance and punishment for the video filmed by the girl”.

Nonetheless, Mr Amira still faces a military trial. A report last year by Yesh Din, a human rights group, found that in only 0.25 per cent of cases heard by military tribunals was the defendant found innocent. Even if acquitted, Mr Amira is expected to face legal costs amounting to nearly US$10,000 (Dh36,700), a sum the family says it cannot pay.

In contrast, the two soldiers responsible for the shooting of the detainee at the roadblock have been reprimanded with the minor charge of “unbecoming conduct”. Neither will stand criminal trial. B’Tselem has called the decision “shameful”.

According to the legal group the Association of Civil Rights in Israel, the punishment under Israeli law for aggravated abuse of a detainee is seven years imprisonment. ACRI’s lawyers have submitted a petition arguing the lenient charge “transmits to officers and other soldiers an extremely grave message of contempt for human life”.

Lt Col Omri Borberg, the commander who gave the order to shoot Abu Rahma, resigned his post but was immediately moved sideways to a senior post in a different unit. In a show of support, Gabi Ashkenazi, the head of the army, said Lt Col Borberg may be reinstated to a command position.

Meanwhile, the villagers said the army’s behaviour would not dissuade them from protesting or cause them to renounce their commitment to non-violence.

Salah Hawaja, a protest organiser, said: “When we started our demonstrations, maybe 50 soldiers showed up. Now there are hundreds stationed permanently around us. Israel is treating us like a major war zone, even though we are using non-violence.

“The people of Nilin have accepted that the best strategy to stop Israel’s plans to steal our land and leave us inside a ghetto is non-violence,” said Mr Hawaja.

“We need to show the world who is the occupier and who the occupied. Israel understands how threatening this is, which is why it is using so much force against us.”

A fund has been established to help the Amira family. Donations can be sent to: Amira Legal Defense Fund, PO Box 1335, Kfar Saba, Israel 44113, made out to “Matte Hacoalitsia”. Alternatively, you can donate through PayPal: donate.

Jonathan Cook is a writer and journalist based in Nazareth, Israel. His latest books are “Israel and the Clash of Civilisations: Iraq, Iran and the Plan to Remake the Middle East” (Pluto Press) and “Disappearing Palestine: Israel’s Experiments in Human Despair” (Zed Books). His website is www.jkcook.net.

[This article originally appeared in The National (www.thenational.ae), published in Abu Dhabi.]

This entry was posted in RagBlog and tagged Israel, Palestine. Bookmark the permalink.