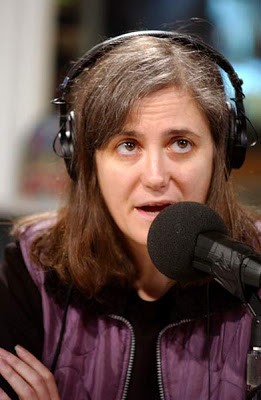 See videos of arrests and link to petition to ‘Stop the Arrests of Journalists,’ below.

All three were violently manhandled by law enforcement officers. Abdel Kouddous was slammed against a wall and the ground, leaving his arms scraped and bloodied. He sustained other injuries to his chest and back. Salazar’s violent arrest by baton-wielding officers, during which she was slammed to the ground while yelling, “I’m Press! Press!,” resulted in her nose bleeding, as well as causing facial pain. Goodman’s arm was violently yanked by police as she was arrested.

On Tuesday, Democracy Now! will broadcast video of these arrests, as well as the broader police action. These will also be available on Democracy Now!.

Goodman was arrested while questioning police about the unlawful detention of Kouddous and Salazar who were arrested while they carried out their journalistic duties in covering street demonstrations at the Republican National Convention. Goodman’s crime appears to have been defending her colleagues and the freedom of the press.

Ramsey County Sheriff Bob Fletcher told Democracy Now! that Kouddous and Salazar were arrested on suspicion of rioting, a felony. While the three have been released, they all still face charges stemming from their unlawful arrest. Kouddous and Salazar face pending charges of suspicion of felony riot, while Goodman has been officially charged with obstruction of a legal process and interference with a “peace officer.”

Democracy Now! forcefully rejects all of these charges as false and an attempt at intimidation of these journalists. We demand that the charges be immediately and completely dropped.

Democracy Now! stands by Goodman, Kouddous and Salazar and condemns this action by Twin Cities’ law enforcement as a clear violation of the freedom of the press and the First Amendment rights of these journalists.

During the demonstration in which the Democracy Now! team was arrested, law enforcement officers used pepper spray, rubber bullets, concussion grenades and excessive force against protesters and journalists. Several dozen demonstrators were also arrested during this action, including a photographer for the Associated Press.

Amy Goodman is one of the most well-known and well-respected journalists in the United States. She has received journalism’s top honors for her reporting and has a distinguished reputation of bravery and courage. The arrest of Goodman, Kouddous and Salazar and the subsequent criminal charges and threat of charges are a transparent attempt to intimidate journalists.

Democracy Now! is a nationally-syndicated public TV and radio program that airs on over 700 radio and TV stations across the US and the globe.

Police in St. Paul arrested several journalists yesterday, including Democracy Now! host Amy Goodman and an AP photographer as they were covering protests of the Republican National Convention. And earlier this weekend, police raided a meeting of the video journalists’ group I-Witness with firearms drawn to arrest independent media, bloggers and videomakers.