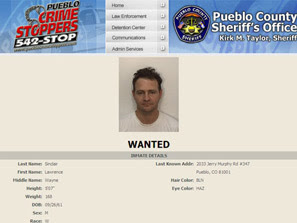 Larry Sinclair is wanted in Colorado, but you can catch him today (Wednesday, June 18) at the National Press Club.

Sinclair is familiar to political junkies and reporters as the source of outlandish allegations about Senator Barack Obama, tales that began with sex and drugs and moved on to murder.

The Duluth, Minn., resident is the sort of figure who appears at the margins of every presidential campaign, and both Presidents George W. Bush and Bill Clinton had their own obscure accusers with dramatic allegations. But as the old media ignores him, Sinclair has taken full advantage of the Internet, and a video in which he makes his claims that have been viewed more than 900,000 times on YouTube.

This afternoon, he’s reserved the Holeman Lounge at downtown Washington’s National Press Club to try to lend his story the legitimacy that comes with national media attention.

Sinclair’s biography, though, may get in the way of that pitch: Public records and court filings reveal that he has a 27-year criminal record, with a specialty in crimes involving deceit. The record includes forgery charges in two states, one of which drew Sinclair a 16-year jail sentence. The Pueblo County, Colo., Sheriff’s Office also has an outstanding warrant for Sinclair’s arrest for forging an acquaintance’s signature and stealing her tax refunds.

“It is what it is,” said Sinclair’s spokesman, Montgomery Blair Sibley, of his client’s criminal record. “He’s not hiding from it, he’s not denying it.”

Sinclair has, however, addressed elements of his criminal past on his own blog and in court filings punctuated by unusual spellings and capitalizations.

Addressing the Pueblo County theft charges, Sinclair swore in a 2004 affidavit that his “ALLEGED VICTIM SEEKS TO USE DEFENDANT AS SCAPE GOAT FOR HER HUSBANDS AND BROTHERS PROBLEMS WITH MEXICAN DRUG DEALERS.”

Sinclair’s affidavit, which he posted to his blog, accompanied a request to a Colorado judge to dismiss the warrant on the grounds that Sinclair was “disabled with [a] severe spine injury and nerve damage,” that returning to Colorado would put his life in danger, and that he was “terminally ill.”

Sinclair, who is still alive, is 46, stands 5’7″, and weights 168 pounds, according to arrest records. Colorado records list him with 13 aliases, including “Larye Vizcarra Avila” and “Mohammed Gahanan.” His story has generally been ignored by the mainstream media, because he’s been unable to substantiate his allegations. He has come to public attention recently, however, because his planned appearance at the National Press Club drew complaints from a wide array of prominent liberal bloggers, led by Firedoglake’s Jane Hamsher. Their petition to prevent Sinclair from renting space at the club – which bloggers feared would lend him credibility – drew more than 11,000 signatures.

“I’m not aware that we’ve ever turned anybody away for content,” she said, adding that Sinclair’s allegations “don’t seem very credible.”

Politico isn’t reprinting Sinclair’s allegations because they are unsubstantiated.

This February, the website Whitehouse.com reportedly offered Sinclair $100,000 if he could pass a polygraph test verifying his claims. He took them up on it, and the site said in a press release that the polygraph organizers said his results “indicated deception.” Sinclair then suggested the polygraph’s sponsors had been bribed to skew the results against him, an allegation his lawyer, Sibley, said he would expand on at his press conference.

Sibley is best known as the lawyer for the “D.C. Madam,” the late Deborah Jeane Palfrey. Earlier this year, the Florida Bar Association suspended Sibley’s license to practice law, in part for being a “vexatious litigant,” a suspension that applies in Washington, D.C., as well.

Wednesday, Whitehouse.com has scheduled a competing press conference outside the National Press Club to discuss the results of the polygraph.

Sinclair’s brushes with the government long predate his recent interest in Senator Obama. The details of his criminal record surfaced after he filed a defamation suit in federal court in Washington, D.C., against three anonymous online critics with names like TubeSockTedD who had written, among other claims, that he was living in a mental institution at the time he allegedly met Obama. Sinclair denies the claim.

In response to his suit, a lawyer for the anonymous bloggers hired local attorneys and private investigators, and dug up details of Sinclair’s criminal record from Colorado, Florida, and South Carolina. The lawyer, Paul Levy of the nonprofit Public Citizen Litigation Group, provided his client’s filings in federal court, which are publicly available, to Politico.

The records tell the story of an itinerant life of small-time crime and bad checks, punctuated by stretches of jail time in two states.

After the Florida episode, according to the records, he returned to Colorado, where he faced check fraud and credit card charges in 1986. Then, in 1987, he was convicted in Colorado on more serious forgery charges, and sentenced to 16 years in jail.

In prison, according to state records filed in federal court, Sinclair was disciplined 97 times for infractions including assault, threats, drug possession, intimidation, and verbal abuse, most recently in
1996.

“He has not institutionalized well,” a spokeswoman for the Colorado Department of Corrections, Liz McDonough, told the Denver Post in 1996 after a month-long Sinclair hunger strike. She said he had served time in prisons in Buena Vista, Delta, Limon and Canon City before being transferred to the state’s maximum security penitentiary in 1993.

In the summer of 1996, according to Colorado’s state court database, he began proceedings to formally change his name from LA Rye Viz. Avila to Larry Wayne Sinclair. By 1999, according to a mention in a local newspaper, he was out of jail and living in Pueblo, Colo.

The Public Citizen investigator in Colorado stated that Sinclair’s outstanding legal troubles there appear to date from 2001, and that Sinclair’s effort to convince the judge in 2004 to dismiss those charges failed. The Pueblo County Sheriff’s website, which pictures Sinclair under the word “Wanted,” cites felony theft and forgery charges.

Sinclair was also arrested and charged with disorderly conduct in South Carolina last September, according to state records filed in federal court.

Sinclair has said that he tried to contact Obama in 2007 to discuss his claims and was ignored, forcing him to go public. On January 18, 2008, a one-minute-and-42-second video was posted to YouTube. It features Sinclair, speaking in a high voice and wearing a red shirt and blue baseball cap, reciting his allegations and addressing Obama.

“I challenge you to take a polygraph test,” he says in the video.

Since then, he’s promoted and elaborated on his claims, and engaged in intense online exchanges with infuriated Obama supporters on his blog and in federal court, where Sinclair and Sibley’s defamation claim has suffered a series of legal setbacks.

Obama’s spokesman declined to comment on any aspect of Sinclair’s story, or his appearance at the press club.

Despite the warrant for Sinclair’s arrest, he appears likely to stay out of jail, as long as he stays out of Colorado. Pueblo County Undersheriff J.R. Hall said that the warrant doesn’t allow for extradition from out of state.

“I doubt very seriously we’re going to be in that jurisdiction tomorrow,” Undersheriff Hall said of Washington, D.C.

Sinclair’s notoriety, and his scheduled press conference, however, has drawn the interest of the Colorado authorities.

“We’ve notified the Federal Bureau of Investigation, and they will investigate,” Hall said.