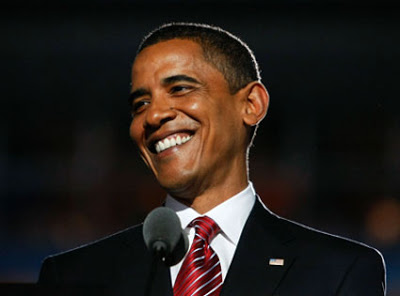 It was a historic speech on a historic night–in a remarkable setting. A crowd of tens of thousands of Americans, filling an entire stadium in the middle of the country, waved American flags and signs calling for “Change.” Never in the nation’s history had more Americans attended such an event. Never before had an African-American accepted the presidential nomination of a major party in the United States. And the speech of Barack Obama matched the moment.

He connected his own history–the history of a not-quite-ordinary American family–to the mythical promise of America. His rhetoric soared–as usual–but it was tethered to reality: in particular, the stark differences between how Obama would approach the challenges the nation now faces and how John McCain would do so. Obama laced his criticism of the Bush years and the possible McCain years with a dose of populism, which gave portions of the speech a sharp edge. And he brought his pitch for hope and change down to the ground with a succinct description of policy ideas he would work for as president.

Obama, as convention dictates, began with a high-minded theme: America is a land of promise, but, he declared, that promise–especially for hardworking Americans–is in jeopardy, placing the nation at a critical juncture. “These challenges are not all of government’s making,” he said. “But the failure to respond is a direct result of a broken politics in Washington and the failed policies of George W. Bush. America, we are better than these last eight years. We are a better country than this.” Given that polls show that at least seven out of ten Americans–maybe more–believe the country is on the wrong track and a similar number of Americans disapprove of Bush, his criticism was not at all radical.

In one of the more important passages, Obama, taking a populist turn, made the case that his opponent does not understand this:

The truth is, on issue after issue that would make a difference in your lives–on health care and education and the economy–Senator McCain has been anything but independent. He said that our economy has made “great progress” under this President. He said that the fundamentals of the economy are strong. And when one of his chief advisors–the man who wrote his economic plan–was talking about the anxiety Americans are feeling, he said that we were just suffering from a “mental recession,” and that we’ve become, and I quote, “a nation of whiners.”

A nation of whiners? Tell that to the proud auto workers at a Michigan plant who, after they found out it was closing, kept showing up every day and working as hard as ever, because they knew there were people who counted on the brakes that they made. Tell that to the military families who shoulder their burdens silently as they watch their loved ones leave for their third or fourth or fifth tour of duty. These are not whiners. They work hard and give back and keep going without complaint. These are the Americans that I know.

Now, I don’t believe that Senator McCain doesn’t care what’s going on in the lives of Americans. I just think he doesn’t know. Why else would he define middle-class as someone making under five million dollars a year? How else could he propose hundreds of billions in tax breaks for big corporations and oil companies but not one penny of tax relief to more than one hundred million Americans? How else could he offer a health care plan that would actually tax people’s benefits, or an education plan that would do nothing to help families pay for college, or a plan that would privatize Social Security and gamble your retirement? It’s not because John McCain doesn’t care. It’s because John McCain doesn’t get it.

Obama blasted McCain for embracing the “that old, discredited Republican philosophy–give more and more to those with the most and hope that prosperity trickles down to everyone else.” He proclaimed that it was time for GOPers, “to own their failure. It’s time for us to change America. And that’s why I’m running for president of the United States.”

He did not say–as Hillary Clinton did during the primaries–that he was running to fight for you. His is still a campaign of collective action–us, not me– and that might continue to make it hard for voters facing tough economic times to identify with Obama. (Some people desire a champion slugging for them, not a movement to join.) But on tax cuts, health care, outsourcing, energy independence, and education, Obama vigorously outlined the stark differences between him and McCain–and he presented those differences in language designed to appeal to working-class voters.

On national security, Obama ceded no ground to McCain. “If John McCain wants to have a debate about who has the temperament, and judgment, to serve as the next Commander-in-Chief, that’s a debate I’m ready to have,” he said. None of his arguments were new–he blasted McCain for being overly eager to go to war in Iraq before the job was done in Afghanistan–but he did so with great confidence. “John McCain likes to say that he’ll follow bin Laden to the Gates of Hell–but he won’t even follow him to the cave where he lives,” he remarked.

Obama sounded strong; he looked strong. “If John McCain wants to follow George Bush with more tough talk and bad strategy, that is his choice–but it is not the change that America needs,” he said. Obama warned McCain to stop questioning his patriotism: “I’ve got news for you, John McCain. We all put our country first.” And, he said, don’t go pulling the same-old, Rove-like stunts, accusing Democrats of being nothing but tax-raisers and national security weaklings:

The times are too serious, the stakes are too high for this same partisan playbook. So let us agree that patriotism has no party. I love this country, and so do you, and so does John McCain. The men and women who serve in our battlefields may be Democrats and Republicans and Independents, but they have fought together and bled together and some died together under the same proud flag. They have not served a Red America or a Blue America–they have served the United States of America.

Throughout the entire speech, Obama’s delivery was powerful. He stuck with his now-familiar message of hope and change. He reiterated his call for a politics that transcends pettiness and distractions. But he really took it to the other side–issuing specific charges and offering specific ideas for policy changes. Obama still has one failing as a great speaker: he does not quite step out of the moment of the Grand Speech to talk directly to the individual on the couch who is watching and weighing. He seeks to inspire and attract support with political poetry–but there’s a touch of abstraction to the exercise.

Nevertheless, what was in the speech was far more important than what might have been missing. Anyone watching could see that Obama has an economic vision. He showed he had no reluctance to challenge McCain on national security. He linked the policy debates of the moment to the noble currents of American history, noting that this day was the forty-fifth anniversary of the “I Have a Dream” speech of Martin Luther King Jr. He soared high. He punched hard. He was tough without being mean. It was a near-perfect–or maybe perfect–blend of positive and negative.

Can an acceptance speech make a difference in an election? This was one with the potential to do so. And as the Democrats’ convention concluded with fireworks exploding at Denver’s Invesco Field and stately orchestral music playing from the loudspeakers, Democrats were entitled to look at their once-improbable leader and say, Mission Accomplished. But the Republicans will have their chance to rip Obama apart at their convention next week–and in the weeks following that. This will be a fierce and bloody election. There will be no more big speeches for Obama, though the debates between the candidates could end up mattering much. Yet on a night when the fast trajectory of Obama’s extraordinary life intersected with the slow trajectory of American history, Obama made a passionate and forceful case for himself, for his campaign, and for his view of America and what must be done to serve its citizens. He gave his supporters cause for hope.

This entry was posted in RagBlog and tagged Democratic Convention, Obama, Presidential Campaign. Bookmark the permalink.