Obama’s Speech : No News is No News 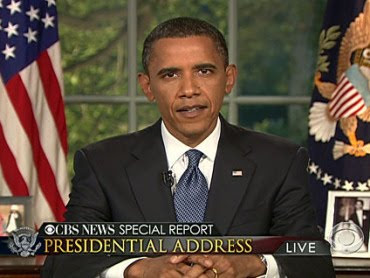 Flanked above his left shoulder by what looked like a pair of turkey legs dressed in a red-striped diaper, the President of the United States spent 20 minutes Tuesday night capitulating to a fight that he refuses to win.

The terms of battle are simple. We need to plug the hole, contain the oil, extract the oil from the water, and swiftly remove the oil that makes it onto beaches and wetlands. Count ’em. Four things.

As far as plugging the hole goes, there was no news from the President’s lips. He avoided using the word August.

For containment and removal, the President directed our attention to future oil. He said we could soon expect to see 90 percent of the future oil captured at the point of the gusher. He didn’t say 90 percent of what.

In terms of the oil that’s already out there, the President illuminated nothing. He didn’t say how much he thought there was or how much capacity we have to extract it. He repeated what he already know: millions of gallons of oily water have been extracted from the Gulf, millions of boom-feet have been deployed. He said nothing to convince us that the effort even halfway matches up to the challenge. He didn’t show any maps or aerial photos.

Either the President does not understand the urgency of the battle against the oil at sea or he thinks that we won’t notice how he left that part ill-defined. But we’ve had eight weeks to notice. The single most important difference that the President can make is the difference in the battle against the oil at sea. Yet this is what he does not clarify, not even speaking prime time from the Oval Office.

As for removal and cleanup of oil at shore, this has been the President’s favorite issue all along, like when he called the cameras closer to him at Grand Isle while he picked up a tiny little tar ball from the beach.

“And sadly,” said the President, “no matter how effective our response is, there will be more oil and more damage before this siege is done.” Therefore, he has meetings scheduled, commissions appointed, and make no mistake about it, he — the President of the United States — has ordered plans to be drawn up!

All by himself and speaking from behind the most powerful desk in the world on Tuesday night, the President of the United States imploded his Presidency. Finally, the only people who make any sense any more are those who said from the very beginning that this man would not stand and deliver.

CNN could have nailed the coverage. They had all the necessary assets in place, including the Carvilles, David Gergen, Anderson Cooper, Billy Nungesser, and a room full of “real people.” But everything was underplayed, chiefly because the people who are most likely to feel the truth are also the people most in need of whatever the President still has to offer.

Nungesser and the Carvilles restrained themselves. The “real people” were given only about a minute to convey their shrewd grasp of the hopelessness they were left in. Nothing will ever be the same again. Didn’t the President confirm that? Quick as they appeared from the Gulf the “real people” were gone. As a sheen of timidity darkened the production values at CNN, you could find yourself clicking to the Palin-O’Reilly channel for a timidity-free zone.

Twenty minutes before the President’s address I got an email from the Plaquemines Parish news service about the latest effects of the BP-led assault on the Gulf Coast.

“As you can see in the pictures,” said the text of the email, “plastic bags containing snare boom were recklessly placed without consideration for the natural wildlife” on Queen Bess Island where the Plaquemines Parish Inland Waterways Strike Force recently discovered broken eggs and crushed chicks of the precious Brown Pelicans.

“They (the Brown Pelicans) already have the oil affecting their population during their reproduction time. Now we have the so-called clean-up crews stomping eggs,” said Nungesser. “The lack of urgency and general disregard for Louisiana’s wetlands and wildlife is enough to make you sick.”

[Greg Moses is editor of the Texas Civil Rights Review and author of Revolution of Conscience: Martin Luther King, Jr. and the Philosophy of Nonviolence. He can be reached at gmosesx@gmail.com .]

1 Response to Obama’s Speech : No News is No News