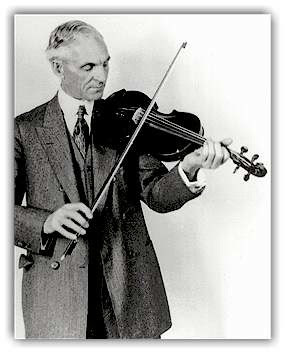 Fiddlin’ Henry Ford doubled workers’ wages. Image from FiddlingAround.
Henry Ford on why there
isn’t going to be a recovery

Nicholas Kristof is concerned. The United States, he says, “now arguably has a more unequal distribution of wealth than traditional banana republics like Nicaragua, Venezuela and Guyana.” Kristof speaks for many of us. Even Alan Greenspan (who helped so mightily to make it so) is concerned about America’s rampant level of income and wealth inequality.

But Wall Street and most of the Republicans don’t care. No doubt — for them — it’s good the U.S. is still Number One in something! They place no value on equality itself. There seems to be no concern for fairness. And they have convinced themselves that inequality — even extreme, exaggerated inequality — is good for the economy.

Wrong! What they are not seeing is that rampant, out-of-control growth in inequality is bad for the economy. What they have forgotten is something Henry Ford (another unlikely preacher against extreme inequality) told us.

In 1914 Ford astonished most of his American fellow capitalists by abruptly doubling the wage level of his workers. He announced a $5.00 a day wage policy, when going market wages (what he COULD have got workers for) were about half as much. Applying the Consumer Price Index, that $5 would be more than $100 a day now.

In his famous memoir, on the subject of wages, Ford wrote:

No manufacturer in his right mind would contend that buying only the cheapest materials is the way to make certain of manufacturing the best article. Then why do we hear so much talk about the “liquidation of labour” and the benefits that will flow to the country from cutting wages — market? What good is industry if it be so unskillfully managed as to not to return a living to everyone concerned? No question is more important than that of wages — most of the people of the country live on wages. The scale of their living – the rate of their wages — determines the prosperity of the country. [Emphasis added.] — Henry Ford, My Life and Work, Garden City, New York: Doubleday, Page & Company, 1923, p. 116]

This was “Fordism.” Workers should not only be worker-producers, but simultaneously be consumers of the goods produced (very much including Henry Ford’s automobiles).

It was a powerful idea. Marx’s progressive impoverishment of the working classes leading to the end of capitalism didn’t occur. Capitalism got new wind instead.

Good fun. But Ford and Fordism were almost that important. American post-World War II prosperity, and the enormous advances of Western Europe, were based on always-growing consumption by the masses whose incomes and standards of living also grew constantly. The Consumer Economy had been invented, and it flourished.

How amazing that the political-economic managers of our society seem to have completely forgotten this basis of the American prosperity they love to celebrate! First, our industrialists have been permitted — in many ways encouraged — to seek the absolutely lowest market wages elsewhere in the world to build their products.

American workers suffer and, in the longer run, the country suffers; but owners and managers greatly benefit since their profits are easier than ever. They pay labor there; they sell the product here. Good business. (And, let us admit that in the short run, as consumers, we all benefit and are all, in a measure, complicit.)

The real level of wages has been stagnant, not improving, for several decades. Virtually all the income (and wealth) growth since 1965 has been within the top 20%. In fact, per Kristof, “from 1980 to 2005, more than four-fifths of the total increase in American incomes went to the richest 1 percent.”

But wait. This process has been going on since Reagan, yet our consumption has continued to grow in the face of stagnation in income for two-thirds of the population. Was Henry Ford wrong? Is “Fordism” contradicted?

No. There was a huge boost in family income and consumption as more women joined the work force. But that’s a one-time thing. After that, we’ve been living on borrowed time. Literally borrowed: the development of credit cards put deficit finance at the disposal of us all. And easy mortgages and home equity loans fueled a housing price bubble, and gave us more to spend with. It seemed too good to be true. It was.

So these bullets are now fired; the gun is pretty well empty.

Everyone agrees that recovery from the Great Recession depends on returning to (if possible, surpassing) the consumption rates of the 1980s and 1990s. But where is that supposed to come from?

We still find our Captains of Industry crowing (and adding to their personal fortunes) every time they can further “liquidate” their labor forces. (Maybe they should read My Life and Work!)

We keep our minimum wage set to absurdly low rates, far too low to support a family’s consumption.

I spend a lot of time in Denmark where I have close family, and find that our U.S. median wage falls about where their lowest new-worker entry wages are set. Our conservative economists would tell us that such high wages must produce high unemployment and economic stagnation. Sorry: not so. Denmark is weathering the Great Recession better than we are. And their unemployment is put at under 5%!

The U.S., meanwhile, tolerates an unemployment rate of almost 10%. But surveys put under-employment at 20%.

Finally, thanks to decades of hard work by corporate forces and their political allies trade union membership within the private sector labor force is under 8%. We are back to 1901 levels. (We always knew the right is out to abolish the 20th Century!)

For those of us on the left, it’s a matter of fairness, of equality, of equal rights, of humanity. The right doesn’t see that. OK. But they had better see that it’s a matter of preserving the economic vitality and shared prosperity that we once were famous for.

Here are three ideas that could get our country moving again. First, a national minimum wage of at least $12 (indexed for inflation!). Second, let’s reverse the tax and other incentives that have encouraged our industrialists to export our productive capacity. Let’s bring good jobs home.

Third, we must push back hard on the levels of inequality that give even conservatives pause. We must restore tax progressivity in general and, in particular, distinguish more intelligently between the large numbers who are wealthy and the small numbers who make super incomes (the ones most of us call “obscene”).

We are fortunate: the U.S., among developed countries, is not at all an over-taxed country. Relatively modest tax increases can rebalance government revenues and expenditures, while beginning a return to a more “American” balance between economic equality and inequality.

If these obvious and common sense ideas sound “radical” — well, it shows how much we have lost as a nation in recent decades, and how successful the extreme right has been.