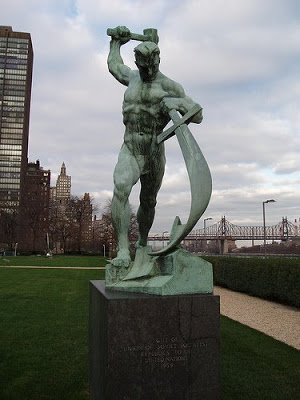 “Beating Swords into Plowshares.” Photo by I Like.
For an ‘Obama Force’
(Aka a foreign policy note from the Left)
By Paul Buhle / The Rag Blog / January 3, 2009

The blogosphere is now thick with foreign policy discussions about the impending new administration, and on the Left side, sharply divided between those with substantial hope (that is, evidence through appointments), especially Tom Hayden; and those with less than no hope–and a great deal of anticipatory hostility. Among the most hopeful and precise, but without any location that I know of on the political scale is, interestingly, Deepak Chopra.

Let me make a small contribution without presuming that I am doing much but providing food for thought, and to harsh critics, a moving target. We might informally call this orientation: “Demobilize the Empire.”

What I propose is an “Obama Force,” that is a much scaled-down military or peace-converted military with an entirely different purpose than the military-intelligence establishment of the present. I call it the Obama Force because in carrying out peaceful, reconstruction-related activities, it would transform the views of the majority of the world toward the US, realizing a hope that is identified practically everywhere, even in nations like Colombia with popular but severely repressive rightwing rulers, with the three words “Barack Hussein Obama.”

What would the Obama Force look like? Nearly all the bases for US military occupation abroad would be closed or phased into other tasks, done in such a fashion that no future president could easily reverse the direction and restore the occupations constant since, at least, 1945. Most clearly, the signal to be sent to the world is that the reorientation of the military from Western Europe toward the oil lines of the Third World would not continue. It would be made clear that the US presence, if it continued, would not be related to US corporate interests, and would not halt the repatriation of resources from US (or any other) foreign so-called investors.

The military forces would also be democratized, through the formation of an American Servicemen’s Union or some such successor to older unionization efforts. Officers would be forbidden to stop these activities. Also, retiring and retired officers would be forbidden to join the boards of corporations building equipment or offering supplies to tax-funded purchases. This would close down the most bloated sector of the US population apart from crooked investors, and with the same purpose.

As part of the same policy, CIA stations would be mainly closed, or converted in such a way as to signal to each host country that any spying or interference (of the kind now carried on in Bolivia, with the US seeking to overthrown an elected government by support of the traditionally rich and powerful) would be met with expulsion and/or arrest and prosecution by the host country, without protest from the United States.

The purposes of US involvement would be to defend the ecological integrity of societies by aiding those working toward sustainability and recovery; and second, toward aiding real democracy, i.e., the redivision of wealth and power. As Chopra among others has proposed, those in the military, top brass to bottom grunt, would re-engage themselves usefully in rebuilding infrastructure, for starters. (In that context, of course, unions among military rank-and-file will make more obvious sense.) Destroyers and submarines would be abandoned, all future weapons technology research would be abandoned, and brutally destructive technologies now in use, including Depleted Uranium weapons (the battlefield reintroduction of the nuclear weaponry, first used by senior George Bush, then by Bill Clinton and junior Bush, with horrific results), cluster bombs, etc., would be immediately taken out of arsenals and destroyed. Now-unused military bases would be converted into housing for the world’s poor, including the American poor.

Are these proposals utopian? In one sense, yes. Since 1945, militarization of the peacetime economy and society has been accepted by Democrats and Republicans alike, as Military Keynesianism. Before 1940, the abuse of Latin American populations by US military forces were a regular feature of hemispheric life, and plenty of other examples can be found including the Philippines, the rehearsal for the Vietnam War.

Yet the size and presence of the military within US domestic life was small, and most Americans shared the view that it should remain small.as it logically would have returned in 1945 (when broken Russia was no real threat) or 1990 (when the Russian supposed threat disappeared). We can look to an older society not dependent upon military spending as something historically rooted in the disillusionment with the First World War, and now revived through disillusionment with every war, Korea or Vietnam onward.

I have gone on long enough now, but it should be clear that even if Obama were to agree with these general premises and seek to walk back the global full-court-press that has been bipartisan politics for a half century, opposition against him would gather on all sides. Among the most vehement, we may note in closing, are the “Humanitarian Hawks” of the Samantha Power stripe. Even more than their neoconservative counterparts now busy licking wounds, with large salaries, in the think tanks, the liberal hawks urgently need successful wars on any terms so as to restore them and their reputations, their book deals and six figure college salaries, within the changing context of liberalism.

This entry was posted in RagBlog and tagged Foreign Policy, Military, Obama Presidency, Progressives, The Left. Bookmark the permalink.

4 Responses to Paul Buhle : An ‘Obama Force’ (Swords into Plowshares)