Power Struggle : Shining a Light on the Salvadoran Elections 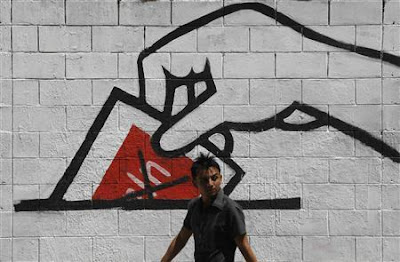 On March 13, 2009, a pedestrian in San Salvador walks past a mural supporting the FMLN in the upcoming elections . Photo by Daniel Leclair / Reuters.
Live from El Salvador:

We see the electric cable hacked apart and lying on the sidewalk… A delegate asks the driver if the electric company is near. ‘Oh, they are here,’ he says. ‘Great!’ she responds, ‘they can fix the power.’ The driver responds, ‘They are the ones who cut the power line.’

[The following is the second of a series of dispatches from a regular Rag Blog contributor who is writing under a pseudonym due to the sensitivity of the situation in El Salvador.]

I am part of a huge presence of international observers in El Salvador, preparing for the Sunday, March 15th election here in which the FMLN and ruling ARENA party are the two contenders. There are 4,000 of us here, from the OAS, EU; there are diplomats and representatives from 30 countries.

Imagine an election with a change candidate and a corrupt party in power for twenty years, presiding over an economy that widens the gap between rich and poor, concentrates wealth, starves public services until they break and then uses that opportunity to privatize those services. Two days before an historic election, International Observers are invited to a reception by the opposition party. A similar reception is given by the party in power. The Vice Presidential candidate is present as are many other elected officials and there are hundreds of observers. After food and drinks, there are speeches. Then the power goes off.

Sabotage say those who know. As my delegation goes off to its tour bus, we see the electric cable hacked apart and lying on the sidewalk. When we get into our bus, a delegate asks the driver if the electric company is near. “Oh, they are here,” he says. “Great!” she responds, “they can fix the power.” The driver responds, “They are the ones who cut the power line.” They work for the privatized electric company in San Salvador with U.S. owners, fearful of any change in government. This is the climate here. Highly charged. A climate of fear.

On the other hand, it has been gratifying to see that public pressure has been mounted. The State Department issued a statement of neutrality. Even the Embassy here has echoed these words. Today, we hope that Hillary Clinton will speak out as well. Some of this has been picked up in the press here and it has dampened the words of a small gaggle of right wing Republicans who have likened the presidential candidate Mauricio Funes to a demonic Hugo Chavez, eager to spread red flags across Latin America. More later. We’re leaving to see our polling stations.

1 Response to Power Struggle : Shining a Light on the Salvadoran Elections