Now, here’s a big surprise! The President of hope and change playing politics as usual by threatening the most vulnerable, new House members on Capitol Hill with sanctions for refusing to support his war-funding package. Deep from the heart of an anti-war activist: Barack – go fuck yourself. 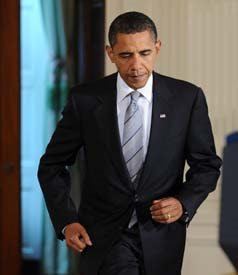 Days ago, a warning shot from 1600 Pennsylvania Avenue landed with a thud on Capitol Hill near some recent arrivals in the House. The political salvo was carefully aimed and expertly fired. But in the long run, it could boomerang.

As a close vote neared on a supplemental funding bill for more war in Iraq and Afghanistan, The San Francisco Chronicle reported that “the White House has threatened to pull support from Democratic freshmen who vote no.” In effect, it was so important to President Obama to get the war funds that he was willing to paint a political target on the backs of some of the gutsiest new progressives in Congress.

But why would a president choose to single out fellow Democrats in their first Congressional term? Because, according to conventional wisdom, they’re the most politically vulnerable and the easiest to intimidate.

Well, a number of House Democrats in their first full terms were not intimidated. Despite the presidential threat, they stuck to principle. Donna Edwards of Maryland voted no on the war funding when it really counted. So did Alan Grayson of Florida, Eric Massa of New York, Chellie Pingree of Maine, Jared Polis of Colorado and Jackie Speier of California.

Well, for one thing, progressives across the country should plan on giving special support to Edwards, Grayson, Massa, Pingree, Polis and Speier in 2010. If we take the White House at its word, they may find themselves running for re-election while President Obama withholds his support – in retaliation for their anti-war votes.

But it’s not enough to just play defense. We also need to be supporting – or initiating – grassroots campaigns to unseat pro-war members of Congress.

In the Los Angeles area, the military-crazed and ultra-corporate Congresswoman Jane Harman will face the progressive dynamo Marcy Winograd in the Democratic primary next year.

Harman’s vote for the latest war funding was predictable. But dozens of Democrats with longtime anti-war reputations also voted yes. Among the most notable examples were Oregon’s Peter DeFazio and Washington’s Jim McDermott, who apparently found their anti-war constituencies in Eugene and Seattle to be less persuasive than the White House chief of staff.

“White House aides worked the halls during the hours before the vote, and chief of staff Rahm Emanuel called some lawmakers personally,” McClatchy news service reports. “DeFazio, who was undecided and wound up voting yes, said he talked to Emanuel by phone for about five minutes as Obama’s top aide explained the administration’s strategy in the war on terror.”

This is a crucial time for anti-war activists and other progressive advocates to get more serious about Congressional politics. It’s not enough to lobby for or against specific bills – and it’s not enough to just get involved at election time. Officeholders must learn that there will be campaign consequences.

When progressives challenge a Democratic incumbent in a primary race, some party loyalists claim that such an intra-party contest is too divisive. But desperately needed change won’t come to this country until a lot of progressive candidates replace mainline Democrats in office.

On behalf of his war agenda, the president has signaled that he’s willing to undermine the political futures of some anti-war Democrats in Congress. We should do all we can to support those Democrats – and defeat pro-war incumbents on behalf of an anti-war agenda.

[Norman Solomon, the author of a dozen books including “War Made Easy: How Presidents and Pundits Keep Spinning Us to Death,” was an elected Obama delegate to the Democratic National Convention. He is on the advisory board of Progressive Democrats of America. For more information, go to: www.normansolomon.com.]

Thanks to Mercedes Lynn de Uriate / The Rag Blog