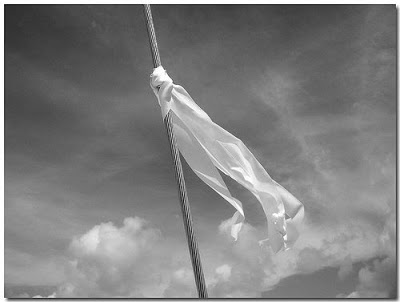 In one week of the Sherrod Saga, America recapitulated the whole history of racism since the Civil War. Even more than that, the whole story was another episode in a broader practice of the Obama Administration: repeated preemptive surrenders to the Big Powers of American corporate institutions. And the policy of preemptive surrender is rooted partly in a mistaken wandering of the President himself from what began as a deep spiritual search for how to unify his Kansas and his Kenya.

The saga began with a Black family that was uppity. It began organizing Black farmers and then white farmers too, just as Black folk freed from slavery had done during Reconstruction. Then came the lynching — this time, through words and firing, rather than nooses and burnings. At first — just as when the Ku Klux Klan broke up Black efforts to end Jim Crow and win the right to vote — America applauded the Klan. (Compare the public response to the pro-Klan film, The Birth of a Nation.)

But then, as there was in the ’60s, there was a reawakening of decency and truth. Late in the week, most of the country recognized that the TV lynching by a white-collar Klansman was unjust, untruthful, indecent. And so the institutions– — the media, the White House, apologized.

Many commentators have explored how the rotting but unburied corpse of racism came to zombie life during that week. But there was more than racism involved. The whole episode — the way in which the Department of Agriculture and the White House joined in the lynching — echoed a pattern of behavior of the Obama Administration that includes issues that are not issues of race.

Preemptive surrender to Big Oil, when the president tried to buy its support for a weak climate bill by opening the Atlantic and Gulf coasts to more oil well drilling. Even when the catastrophic oil gusher produced by BP’s arrogance and greed began to poison an entire region of America — not even then did the president decide to forbid all new offshore drilling. It took a month of tragedy before even a temporary moratorium was placed upon such outrageous raping of Mother Earth.

Preemptive surrender to Wall Street, not only by focusing the great bailout on the biggest banks and ignoring small community banks and credit unions, but also by refusing to use the federal government’s new ownership stake in the Wall Street banks to force massive changes in their lending practices or in their bonuses to chief executives.

Preemptive surrender to the auto companies, where the president went out of his way to say that the federal government’s role in saving them would not be used to insist that they move into producing massive numbers of green autos, or into a great shift toward public transportation like the great shift the government demanded from automobiles to tanks at the start of World War II.

Preemptive surrender to Big Army, when the president gave in to generals who insisted they could rebuild Afghan society at the point of bayonets and the trajectory of Predator drones — rather than paying attention to the history of imperial failures in the Afghan hills for the last two millennia, or even paying attention to wise counsel from Vice President Biden and Ambassador/General Eikenberry to restrict the U.S. military to the narrow task of counter-terrorism. In the guise of refusing to “surrender” to the Taliban, surrendering to clever stupidity — to the top-down, brass-heavy, brain-dead pieces of the military. To ignoring all the needs of a civilian society that is being eaten alive by the cancer of a militarized empire.

In every case, the President and his Administration kowtowed to the biggest, greediest, and most incompetent institutions in the American economy. Instead of going day after day, week after week, to the American people as Franklin Roosevelt did in the crisis of 1933, the president begged permission from these arrogant institutions to make weak changes in American policy.

Why has this been the Obama administration’s habitual response? The political reasons are obvious; the Bigs have Big power, and fighting them is hard. But there are also personal reasons.

At the personal level, Mr. Obama is meeting a deep personal need that grows from a great spiritual seeking. He is himself, as he has often said, the product of both Kansas and Kenya. Throughout his life, he has sought to reconcile these two polarities within himself.

At one level, these two sources of his beginning indeed seem to be polar opposites: conventional middle-class white America, symbolically the heartland of America in time and space — as opposed to a desperately poor third world country that symbolically represents the other half of the human race.

So Mr. Obama seems to be constantly seeking to reconcile and connect these two realities. A praiseworthy path.

But in office, he has kept reaching to reconcile his liberal and progressive base — the labor unions, the Black community, and the compassionate women who seek to heal poverty and despair in America and the world — with Big Pharma, Big Oil, Big Coal, Big Banking, Big Army.

But Big Coal, Big Oil, Big Pharma, Wall Street, Big Army, are not the grassroots of the world. Mr. Obama’s valid spiritual search for unity has carried him off on the wrong path.

The Sherrod fiasco shows how wrong that path can be. Shirley Sherrod and her husband Rev. Charles Sherrod really are the synthesis of Kansas and Kenya, though they were both born, grew up, and have all their lives worked and struggled in the American South.

I met Charles Sherrod in 1963. Nobody called him Charles, or Charlie or Chuck: he was always simply “Sherrod.” He was one of the leaders of the Student Nonviolent Coordinating Committee, on the front lines of the civil rights struggle in the South.

Like several other SNCC activists, he came for several months to the Institute for Policy Studies, then a very new Washington center for progressive thought and action where I was a Fellow. They came to us for time to breathe, share, and reflect, after months or years of intense and harrowing work in the South.

We arranged a seminar for Members of Congress to meet Sherrod and learn from him what was happening in the South — specifically in the town of Albany (pronounced “All-Benny”) in southwest Georgia, where he had been working. About a dozen Members of Congress came.

Sherrod began by telling the story of Albany almost like an observer, a reporter. Then, as he began explaining the role of the Black church there, his tone slowly shifted and he morphed into the Black minister that he was, giving a passionate sermon in the Black church in Albany.

The sermon was hair-raising. Transformative.

The members of Congress had never heard anything like it. I had never heard anything like it. They and I went from that seminar shaken to our core. I think it was one of the subterranean moments that prepared me for 1968, when Passover came shortly after the murder of Dr. King, to become a serious and impassioned Jew. It was one of the moments that moved Members of Congress toward much stronger support for much stronger civil-rights action.

Unlike almost all of the other SNCC activists, Sherrod stayed in the very same community where he was organizing — stayed in Southwest Georgia, committed to the very same people and the very same region. He has been there ever since.

Later in the 1960s (as Freedom Summer activist Barbara Bloomfield has recalled), he and Shirley were involved in creating a cooperative of Black farmers in Georgia. At one time, the co-op owned 6,000 acres of land, and sustained itself by selling produce and livestock. Like all small farming operations, it needed assistance at the start of the season, and since the Depression, the US Department of Agriculture has allotted money to help small farmers — but its agents actively, intentionally, maliciously failed to help Black farmers.

The co-op that the Sherrods were involved in, New Communities, died because of that discrimination. The land was lost and is now a suburban tract.

It took two decades longer — till the victorious Pigford lawsuit in the 1990s — for the Sherrods and others to prove a systematic pattern of USDA discrimination against Black farmers in the South. A settlement of millions of dollars with the USDA was reached in the late 1990s and then was augmented after the Obama administration took office.

Both Sherrods are rooted in the deepest kind of religious faith. The work she has for years been doing — to empower and strengthen the Black farmers of Southwest Georgia — and, it turns out, to empower white farmers too — is rooted in the best and deepest nonviolent traditions of SNCC.

So it was utterly predictable — and commensurately disgusting– that some right-wing TV version of a Klansman would attempt to smear and ruin her.

It is horrifying — much less predictable — that the leadership of the NAACP would let themselves, as they themselves named it, be “snookered” by a right-wing broadcaster from Fox News. What on earth possessed their national leadership to react — especially knowing what they must know about Fox News — without even calling her or the local Georgia chapter where she gave the speech that was so brutally distorted?

And it is equally horrifying — though unfortunately somewhat more predictable — that the Obama administration would react as it did, with a preemptive surrender to Fox News.

No broadcaster with one hand on a microphone should be slandering someone without checking the facts. without even bothering to call her and ask for comment.

No official, no boss, should be firing a worker on the basis of brutal accusations without once speaking to her.

No “leader of the free world” or his close cabal of sycophants should be conniving in such a machination.

But were those old apologies real? Are the new set of apologies serious? Do they go beyond offering Sherrod a job, to reexamining the whole practice of preemptive surrender to the right-wing power centers? The Sherrods and the others who brought their bodies and minds and souls to move American beyond racism have been called the “veterans of hope.” Do the apologies to Shirley Sherrod mean that the new activists of hope in the present, not the past, the ones scattered all across American trying to renew democracy against the depredations of the various Bigs — will they be heard, supported, encouraged?

For the whole series of events last week makes clear that the spirit of SNCC and New Communities ought not be dead in the land, that the work that both Sherrods have done in their extraordinary lives is not yet finished.

[Rabbi Arthur Waskow is the director of The Shalom Center, and the author of twenty-some books on religious thought and action and on American public policy, including From Race Riot to Sit-in and Godwrestling — Round 2.]