Rabbi Arthur Waskow :
The election: Heartbreak and beyond

Here’s what we need to do: First, mourn.
Then organize. 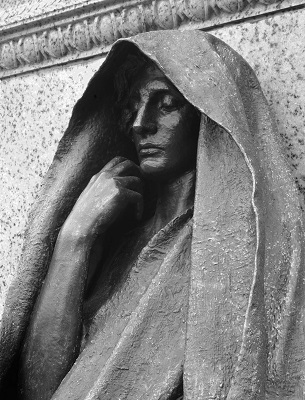 “Grief” by Augustus Saint-Gaudens in Rock Creek Cemetery, Washington D.C., a memorial commissioned by Henry Adams to his wife Marian.

For the America where we thought at least a majority was too menshlich, too compassionate, to turn its own real pain and fear into imposing nightmare on “the other”;

For Mother Earth, who now without a vigorous defense from the USA is more likely to fall irredeemably into climate disaster;

For the poor, for immigrants, for Muslims, for Blacks and Latinos and the Native Nations, for many women, for many of the sick who will lose their health insurance, for GLBTQ folks, and even for the white blue-collar workers who voted for Trump but will not in fact be redeemed by huge tax cuts for the hyper-wealthy and canceling broader health insurance;

For our children and grandchildren.

I think we need two things:

A Platform for America that is shaped by progressive/prophetic activists and is lifted up by Senators Bernie Sanders, Elizabeth Warren, Kamala Harris, Catherine Cortez Masto, and the Congressional Progressive Caucus. It must include both a celebration of the non-racist, non-misogynist, non-xenophobic elements of white male blue-collar culture and policy proposals that address their needs.

A focus on alternative communities, bubbles of decency and empowerment: How do we support them, how do we expand them?

1. It’s very likely that Planned Parenthood will quickly be defunded. It will take a little longer, but a right-wing Supreme Court may reverse Roe v. Wade. That will probably leave some states where abortion will still be legal — at least New York and California. How do we create an effective network of health support for women, including abortion? How do we mobilize MDs who now have a moral/ethical stance very different from what most MDs had in 1955?

2. No hope now for a carbon tax or even the Clean Power Plan that Obama tried to institute. We will need to organize neighborhood solar co-ops that will save householders money (though the federal subsidies will probably disappear), reduce CO2 emissions, and provide a democratic base for further struggle. Can we win support from city and some state governments for doing that? Can the environmentalist organizations shift their agendas to focus on that?

4. Major effort to shift money from big banks to credit unions (much better than even neighborhood banks because there is at minimum the possibility of democratic involvement and control). Can existing food co-ops become bases for strong credit unions? Can religious congregations become centers for “free-loan societies,” like those that emerged in immigrant generations?

5. If a right-wing Supreme Court reverses the Constitutional right of same-sex marriage, then prophetic religious communities must join in celebrating that right and making sure those marriages are upheld in our culture and our law.

6. Should we press Obama to issue “Christmas pardons” for tens of thousands of Federal prisoners who have been convicted of nonviolent drug offenses, and bring them into neighborhood support groups?

7. How do we deal with a triumphant right-wing FBI, NSA, CIA, with rejuvenated local-police “red squads”? Will Trump really have his attorney general (Giuliani?) bring charges against Hillary? What do we do then? What if armed “brown shirts” appear?

8. I think it is even clearer than before that it will be valuable to draw on the symbolism and legacy of Martin Luther King as we move into the 50th anniversary of his last year of life and the need to address the “triplets” of racism, militarism, and materialism that he named in his Riverside speech, April 4, 1967, exactly one year before he was killed. The Shalom Center has already begun working on that. More to come.

Comment on this article at The Rag Blog and on the version at The Shalom Center website — and share it with others. And please help The Shalom Center move forward through our heartbreak to purse justice even more vigorously, to heal the deep wounds of our society and our Earth. You can ontribute here.

[Rabbi Arthur Waskow, Ph.D., founded (1983) and directs The Shalom Center. In 2014 he received the Lifetime Achievement Award as Human Rights Hero from T’ruah: The Rabbinic Call for Human Rights. In 2015 The Forward named him one of the “most inspiring” U.S. Rabbis. He has written 24 books and the pioneering essay, “Jewish Environmental Ethics: Adam and Adamah,” in the Oxford Handbook of Jewish Ethics (Oxford University Press, 2013). Rabbi Waskow has been arrested 23 times in protest actions for peace, racial justice, and healing from the climate crisis.]

3 Responses to Rabbi Arthur Waskow :
The election: Heartbreak and beyond