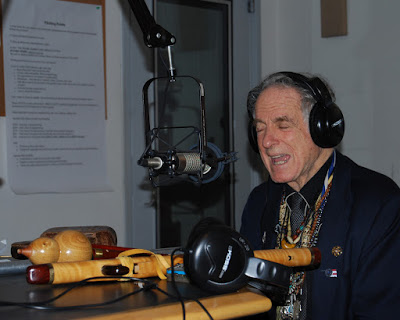 David Amram, a virtuoso composer and musician who has been a trailblazer in the American arts scene for decades and was a pioneer of what became known as the Beat movement — and who was called “the Renaissance Man of American Music” by The Boston Globe — was in Austin for the September 29 Texas premiere of This Land is Our Land, his folk-inspired Symphonic Variations on a Song by Woody Guthrie.

The orchestral work, which was commissioned in 2007 by Guthrie’s daughter Nora and son Arlo through the Woody Guthrie Foundation, was performed by the Austin Civic Orchestra under the spirited direction of Lois Ferrari as part of the year-long, nationwide Woody Guthrie Centennial celebration.

Amram was also Thorne Dreyer’s guest on Rag Radio, Friday, September 28, from 2-3 p.m. Rag Radio is a syndicated radio show produced in the studios of KOOP-FM, a cooperatively-run all-volunteer radio station in Austin, Texas. On the show Amram discussed his storied career and performed live on several instruments.


David Amram’s symphonic composition, This Land is Our Land, was first performed in 2007 by the Symphony Silicon Valley in San Jose, California, and was performed on September 21, 2012, by the internationally renowned Colorado Symphony Orchestra, and recorded for later release as a Master Recording. 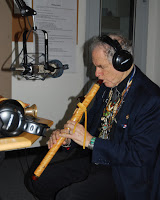 In his “Symphonic Variations,” Amram draws from what Guthrie might have experienced traveling around the country, tapping a range of musical genres including a Cherokee “Stomp Dance,” gospel music, a “Texas barn dance,” Mexican music rooted in Guthrie’s time as a farm worker, a “Dust Bowl Dirge,” and ethnic music Woody would have encountered while living in New York City, including Caribbean and Middle Eastern sounds and the rhythms of a jazz block party.

“And,” David told us, “in each variation you hear, snuck in there, the ‘This Land is Your Land’ melody in counterpoint to everything else.” “Creating the work,” he said, “was almost like building a boat inside a bottle.”

Amram first met Woody Guthrie in 1956 and remembers that “he spent the whole day talking about politics, about traveling around the world as a merchant seaman, about Bach and Beethoven and Shakespeare, and country folks and Cajun music.”

“He was like an encyclopedia,” Amram said. “A wonderful, vital guy.”

David Amram, who will turn 82 in November, was a major figure in the early Beat movement. In December 1957 Amram participated with novelist Jack Kerouac in the historic first jazz-poetry reading at the Brata Art Gallery in New York City, which was, according to writer Paul A. Bergin, “the moment most chroniclers of the period regard as the birth of the Beat Generation.” (Amram said he didn’t even know there was such a thing as a Beat movement, “until I began to read about it.”)

In 1959 Amram collaborated with Kerouac on the landmark film, Pull My Daisy. 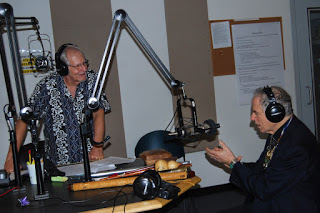 Rag Radio host Thorne Dreyer with David Amram at KOOP-FM in Austin. Inset below: David Amram joined local activists and musicians at a Rag Blog Happy Hour, Friday, Sept. 28, 2012. Photos by Jim Retherford / The Rag Blog.
“I met Allen Ginsberg and Gregory Corso in 1955 when I was playing at Café Bohemia with Charles Mingus,” Amram said on Rag Radio. “I was a 24-year-old hayseed studying classical composition at the Manhattan School of Music on the GI Bill… and Mingus chose me, by a miracle, to be in his band.”

Then, at a “BYOB party” at an artist’s studio in New York, “a young man came up with a red-and-black checkered shirt looking like a Canadian lumberjack, and said, ‘Play for me.’ I had my penny whistles and my French horn with me and so I began to play. Then I kept bumping into him, and finally he told me his name was Jack Kerouac.”

Kerouac “was a wonderful, friendly, warm person,” Amram says, and “was one of the first writers I met who really understood jazz.” Then, “On the Road comes out and in one night he became a world-famous figure.” He was shy, though, David said, and never dealt well with the celebrity that followed.

“Kerouac,” according to Amram, “was the engine that pulled the train.”

“Like Woody Guthrie and Will Rogers and so many others, he makes us see ourselves and treasure the place that we live, treasure the blessings of our own country, and realize that we live in a global culture, and we can all somehow join hands in some way.

“And it all starts out by digging yourself, and your own story.”

A virtuoso musician who was a pioneer on the jazz French horn — and also plays the piano and dozens of woodwind, percussion, and folkloric instruments — David Amram was part of the Charles Mingus Quartet in 1955 and has played with such luminaries as Charlie Parker, Dizzy Gillespie, and Thelonious Monk.

Over the years Amram has collaborated with artists ranging from Willie Nelson, Bob Dylan, and Pete Seeger, to Dustin Hoffman, Langston Hughes, Elia Kazan, and Arthur Miller. He is the author of three books — Vibrations: The Adventures and Musical Times of David Amram; Offbeat: Collaborating with Kerouac; and Upbeat: Nine Lives of a Musical Cat — and is the subject of Lawrence Kraman’s new documentary feature film, David Amram: The First 80 Years.

David Amram has composed more than 100 orchestral and chamber music works and two operas, and his film scores include Splendor in the Grass and The Manchurian Candidate. In 1966, Leonard Bernstein chose Amram to be the New York Philharmonic’s first composer-in-residence. Also a pioneer in World Music and multi-culturalism, Amram has traveled all over the world as a musical goodwill ambassador for the State Department.

Amram, who has consistently merged various musical genres in his work — including popular and folk forms — remembers how the manager of the New York Philharmonic reacted to his approach: “‘How can you equate barroom entertainers with the treasures of European music?’ he asked. And I said, ‘it’s very simple. The commonality is that they both have purity of intent, and an exquisite choice of notes.’ I thought that would do it. And he looked at me like, ‘Man, what kind of psychotic, career death-wish moron has Leonard Bernstein chosen?'”

“And it’s still that way in Austin today, all these years later…”

At the urging of singer-songwriter and historian Bobby Bridger, with whom he shared a passion for Native American music, Amram first attended the Kerrville Folk Festival in 1976, and has been back more than 30 times. He also has performed with Willie Nelson at his Farm Aid events.

David Amram said, “I’m still a work in progress as I approach 82.” Looking back over the decades, he says he tries to approach music “with an open heart and an open mind and to listen for the soulful, human, cultural qualities.”

“Even though I was living on a little farm during the depression, I had a sense that there was something out there, and that music was a gateway to traveling to those places and to look and listen. And it’s something that I’ve tried to do ever since — to learn how to pay attention.

“And once you do, you can see that there are things that are so beautiful that you’d like to share them.”