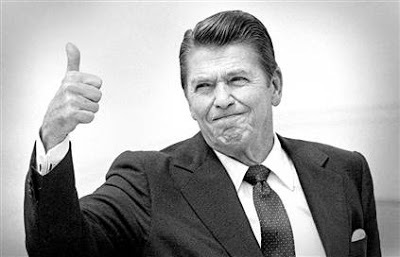 Reagan: Hey, it’s not all bad.
‘The third path is to set standards for the kind of cars we need, backed by a government commitment to buy them on the fleet level and serious tax credits for ordinary folks who buy them.’
By Steve Russell / The Rag Blog / November 13, 2008

See ‘Warning: King Henry’s bailout like Rummy’s Iraq’ by Paul B. Farrell, Below.

It looks like Paulson is trying to present Obama with a fait accompli. The whole point of holding up the bailout was to avoid what appears to be happening… not exactly in plain sight because people have quit paying attention but it would be plain sight if not for that inconvenient truth. Damn… the LIBOR is down, so the flaming emergency got staved off, but it looks like it takes a flaming emergency to get people to watch the till. Right now, there are fingers in the till…

And it looks like the UAW is willing to conspire with management to pick the taxpayers’ pockets for more of the same from Detroit.

The choices are not more of the same or let Detroit go down. The third path is to set standards for the kind of cars we need, backed by a government commitment to buy them on the fleet level and serious tax credits for ordinary folks who buy them. Then guarantee the funds to retool in return for preferred stock or warrants. Giveaway not necessary. We win or lose together. The third path is not simple. It’s complicated as all get-out but it’s the only thing that makes sense. The Big Two and a Half are money pits otherwise.

In a subtle, bloodless coup, the Reaganomics ideology magically pulled victory out of the jaws of defeat in the meltdown. The magic happened fast and quietly, in the shadows, while you were in a trance, distracted by the election drama.

Recently Naomi Klein, author of “The Shock Doctrine: The Rise of Disaster Capitalism,” framed the issue perfectly: “Has the Treasury partially nationalized the private banks, as we have been told? Or is it the other way around?” The question was rhetorical, the answer painfully clear. In a few weeks Wall Street did the old bait and switch, emerging from an economic and market disaster with new powers, in total control of America.

And thanks to Treasury Secretary Henry Paulson’s brilliant bailout coup, Reaganomics is now the new “sleeper cell” quietly hidden inside the Obama White House and America’s Treasury, where it will be for a long time to come, armed with what Warren Buffett calls financial weapons of mass destruction, guaranteed to sabotage the new president, taxpayers and the future of America.

Listen closely folks: You and your government are and will continue being conned out of trillions. Better that we should have taken care of ourselves first and cleaned house, not bailed out Wall Street financiers — let them pay for their sins and feel the pain.

Unfortunately, while you were distracted by the election, Wall Street gained control of our Treasury using a Trojan Horse, Hank Paulson, who filled Treasury with Goldman Sachs alums and pulled off one of the greatest inside heists in the history of the world.

While you were distracted, Wall Street privatized the U.S. Treasury, got the keys to Fort Knox and will be stealing trillions for years to come, through a secret “sleeper cell,” a “virus” installed in the $700 billion Wall Street bailout. They’re laughing: All you got was a heavily discounted paper IOU for you, your kids and generations to pay off. The winners: Paulson, Goldman, Wall Street banks and Reaganomics. The losers: America.

Wall Street and its buddies in Washington (all those politicians bankrolled by 41,000 lobbyists) know two things the voters never, never learn: that no matter how incompetent they are — how greedy, how stupid and how destructive — America’s naive voters will always bail them out of a crisis

The American taxpayer is being royally screwed by the Wall Street bailout giveaway. According to Klein, they’re adding insult to injury, rubbing salt in our wounds:

* “Many of the banks appear to have no intention of wasting the money on loans.”

* Citigroup CFO Gary Crittenden “hinted that his company would use its share of the cash, $25 billion, to buy up competitors and swell even bigger,” giving them the “possibility of taking advantage of opportunities that might otherwise be closed to us.”

* And my old colleagues at Morgan Stanley are “planning to pay themselves $10.7 billion this year, much of it in bonuses.” So screw the taxpayers and Main Street homeowners.

Want to know how badly America’s taxpayers are getting screwed? Listen as Klein compares the American bailout to the British bailout which was negotiated just five days before Paulson “negotiated” our historic $125 billion deal with nine Wall Street banks:

* United Kingdom. Prime Minister Gordon Brown negotiated “meaningful guarantees for taxpayers — voting rights at the banks, seats on their boards, 12% in annual dividend payments to the government, a suspension of dividend payments to shareholders, restrictions on executive bonuses, and a legal requirement that the banks lend money to homeowners and small businesses.” Brown took advantage of his negotiation position of strength.

* United States. What did the American taxpayers? A bad deal negotiated by a former Wall Street CEO loaded with conflicts of interest: We got “no controlling interest, no voting rights, no seats on the bank boards and just 5% in dividend payouts to the government, while [bank] shareholders continue to collect billions in dividends every quarter. What’s more, golden parachutes and bonuses already promised by the banks will still be paid out to executives — all before taxpayers are paid back. No wonder it took just one hour for Paulson to convince all nine CEOs to accept his offer, less than seven minutes per bank for one of the sweetest taxpayer giveaways in history.

It gets even worse: The day after Paulson’s nine-bank deal, he announced his selection of Bank of New York Mellon as the “master custodian” coordinating all phases of the Wall Street bank bailout. BNYM’s role as “the contractor of contractors” is to the $700 billion bailout what Vice President Dick Cheney’s old firm Halliburton was to all the mercenary and private contractor operations in Iraq. Plus the new president’s locked into a three-year contract.

BNYM’s boss can outsource to friendly Wall Street “subcontractors,” handing out billions of taxpayer money with little oversight much as Halliburton did in Iraq. They will “purchase toxic debts from Wall Street, service them and auction them off in the future.”

BNYM’s boss called this plum “the ultimate outsourcing.” An opportunity for his bank, because there’s “a lot of new business that’s going on even in this chaotic marketplace.”

Main Street’s suffering because of Wall Street’s “sins,” and Wall Street sees our pain as just an “opportunity” for them. That’s textbook “disaster capitalism.”

So now you know the truth: The Treasury did not nationalize America’s banks. The fact is, Wall Street privatized the U.S. Treasury with a $700 billion rescue plan being controlled by the very banks that created the mess. You were distracted by the election, hoping for a savior, while Wall Street was turning defeat into victory using a classic “disaster capitalism” strategy.

That’s classic “moral hazard” and with Wall Street’s new “business as usual” attitudes about mergers, bonuses, CEO pay and cash cushions, you just know those Reaganomics “financial WMDs” that Paulson’s leaving behind in the bailout funds “sleeper cell” will ultimately trigger an even bigger financial meltdown soon, by 2011.