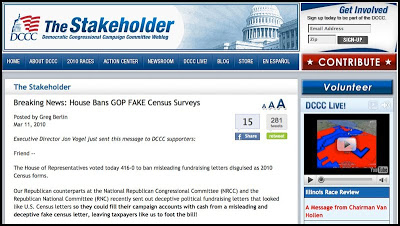 ‘Breaking News: House Bans GOP FAKE Census Surveys’
The headline on the email sent by the Democratic Congressional Campaign Committee, DCCC, forwarded to me the evening of March 11, 2009, by a family friend, certainly caught my attention. Fake census surveys mailed out by the Republicans? The Dynamic Democrats lead a charge and the house bans such underhanded things in a 416-0 vote?

Our Republican counterparts at the National Republican Congressional Committee (NRCC) and the Republican National Committee (RNC) recently sent out deceptive political fundraising (sic) letters that looked like U.S. Census letters so they could fill their campaign accounts with cash from a misleading and deceptive fake census letter, leaving taxpayers like us to foot the bill!

I had not seen or heard anything on the evening news about this “breaking news” so I checked out the latest on The New York Times, CNN, Huffington Post, Christian Science Monitor and a couple of others’ web sites. Nothing.

But something didn’t whoof right. I finally found a short AP dispatch about a House Resolution submitted a month ago, February 9, 2009, by Representative Carolyn B. Maloney of New York, “To protect the integrity of the constitutionally-mandated United States census and prohibit deceptive mail practices that attempt to exploit the decennial census.” Seems the Republicans mailed out a right leaning poll recently with boxes to check for answers and the word “census” was used instead of “poll” and appeared on a page.

The breaking news was that “The legislation passed the House 416-0, after two Republicans who sit on the House panel overseeing the census, Rep. Darrell Issa of California and Jason Chaffetz of Utah, agreed to co-sponsor the measure.”

This particular legislation, a page and a half resolution, H.R. 4621, is titled, “To protect the integrity of the constitutionally-mandated United States census and prohibit deceptive mail practices that attempt to exploit the decennial census.”

The short title as passed in the house is, “Prevent Deceptive Census Look Alike Mailings Act.” The real title should be “To stop the GOP fundraisers from sending out loaded right-leaning questionnaires using the word ‘census’ for their slanted poll.” This kind of subterfuge could confuse really dumb folks, or really mad folks who might think it is a census form and send money back with it to help fill up the Repug coffers. Sounds like Tea Party logic to me.

So, wow! The House bans these repugnant fake GOP census surveys according to this DCCC Email? In spite of the DCCC newsletter headline, nothing is banned at all. All that has happened so far is a regular sausage-grinder vote.

This short resolution was one in a stack of other resolutions agreeing unanimously to fearlessly support God, Country and even the Census. The vote came, “On a motion to suspend the rules and pass the bill, as amended. Agreed to by the Yeas and Nays (2/3 required).” And Varooooom! It passed… like wind in an Aristophanes play.

The Library of Congress web site is a great place to follow the traffic jam of tough, detailed proposed laws as well as apple pie proclamations, resolutions and bills as they inch forward like marbles in a twisted tube.

The “Prevent Deceptive Census Look Alike Mailings Act” passed the House at 2:09 P.M., March 10th. The following day it was, “received in the Senate and read twice and referred to the Committee on Homeland Security and Governmental Affairs” where it will certainly be rushed through by Senators in a huge show of bipartisanship.

In these tough times, finally a resolution to be remembered. A gutsy move to protect the census is now getting underway. Certainly it will zip right out of committee and the winning Senate vote will come on the very day a flight of pigs swoops over that august chamber.

Democrats tore themselves away from getting a health care bill passed and cobbling together 216 votes needed to do that and instead went to bat to stop the possibility of anyone misrepresenting the Census form with evil intent.

They got not just 216 votes but 416 votes to protect the census. The DCCC email newsletter concluded,

Republicans once again made clear they will do anything for campaign cash. The news of these fake Census surveys comes on the heels of the leaked outrageously offensive RNC presentation which showed they planned to use fear through socialist imagery to win the elections next November. You have my assurance that the DCCC will never send anything like this to you, our valued supporters, or to any American taxpayer.

Please take this time to forward this information to your friends and family to warn and make sure they are filling out their official US Census form.”

I thought Orrin Hatch’s Republican Senate Committee email newsletters asking for money were loopy, but the Dems have him beat. The DCCC could have also told us that if a poll comes from the Republicans with their letterhead and logos on the top of the page, on the envelope and below the closing signature it is not a census form, even if the word “census” can be found somewhere on the page.

Another sure check of a legit census form is that it does not have a box to check with how much money you are sending back with it and no elephant or donkey designs on it either.