Report: US Hegemony in Latin America Is Over

Failure to engage with Latin America in more constructive ways than in the past will continue the alienation that has resulted from bad policy and destructive action since the interference in Chile in the early 1970s. As our friend Karen Wald remarks about this article, however, “As usual, wrong reasons but right suggestions….klw.” 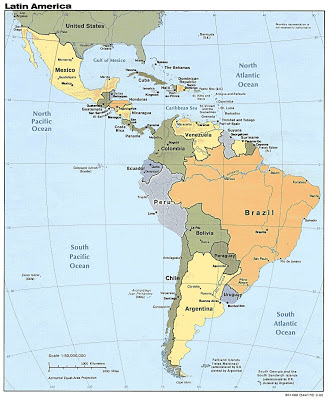 WASHINGTON (IPS) – An elite inter-American commission sponsored by a think tank that is considered close to likely key policy-makers in the administration of President-elect Barack Obama is calling for sharp break in U.S. policy toward Latin America, a substantial opening toward Cuba, greater diplomatic engagement with Venezuela, and a major reassessment of its war on drugs.

In a 32-page report entitled “Rethinking U.S.-Latin American Relations” released by the Brookings Institution Monday, the 20-member “Partnership for the Americas Commission” is urging Obama, among other things, to lift all restrictions on travel to Cuba by U.S, citizens and take other steps to ease the nearly 50-year-old U.S. embargo against Havana, and to put far greater emphasis on reducing demand for drugs at home and the export of guns to Mexico.

The Commission, which was co-chaired by former Mexican President Ernesto Zedillo and Washington’s former ambassador to the United Nations, Thomas Pickering, is also calling on the U.S. Congress to phase out tariffs on ethanol imports from Latin America and subsidies on corn-based ethanol here as part of a larger initiative to develop sustainable energy resources, combat climate change, and foster greater regional integration.

It also calls for the creation of a new “Americas Eight” (A8) that would serve as an umbrella of eight heads of state in the region, including at least the U.S., Mexico, and Brazil and other countries with the continent’s largest populations and economies, that would serve as a “steering committee” to promote the “partnership” between the northern and southern subregions and revitalise hemispheric institutions like the Organisation of American States (OAS).

“A valuable window of opportunity soon will open for the U.S. government to rethink its relations with and policies toward the LAC (Latin American and Caribbean) countries,” the report declared, noting both the advent of the Obama presidency and the bicentennial celebrations in 2009 and 2010 of independence of many Latin American countries. Both should lead to “fresh thinking and new policies”.

Indeed, the Commission’s membership and its sponsorship by Brookings, whose staff includes many senior veterans of the Bill Clinton administration likely to get key posts under Obama, especially in the State Department if, as reported, Sen. Hillary Clinton, becomes secretary of state, suggest that the report’s recommendations will be taken seriously.

Aside from Pickering, prominent U.S. members of the Commission included Nancy Birdsall, the president of the Washington-based Centre for Global Development; the assistant secretary of state for Inter-American Affairs under Clinton, Jeffrey Davidow; Clinton’s U.S. Envoy to the Americas Thomas “Mack” McLarty; and Brookings president and Clinton’s deputy secretary of state, Strobe Talbott.

Although more detailed in specific recommendations in key issue areas, the report’s tone largely echoes that of a major report issued in May by the influential, if somewhat more conservative, Council on Foreign Relations (CFR), entitled “U.S.-Latin American Relations: A New Direction for a New Reality.”

That report called, among other things, for engaging Cuba on a range of issues of mutual concern with a view to ending the embargo, engage more with Venezuelan President Hugo Chavez, deepen Washington’s strategic relationships with Brazil and Mexico, establish a better balance between military and security aid and economic and social assistance in its anti-drug efforts, and recognise once and for all that, in its words, “If there was an era of U.S. hegemony in Latin America, it is over.”

That message was repeated emphatically in the Commission’s report, which stressed the degree to which Latin America’s political and economic ties with the outside world and internally have diversified.

“Their enhanced confidence and autonomy will make many LAC countries much less responsive to U.S. policies that are perceived as patronizing, intrusive or prescriptive, and they will be more responsive to policies that engage them as partners on issues of mutual concern,” according to the report, which also noted that, despite their own competition for regional influence, both Brazil and Venezuela “agree that Washington should play a more limited role in their part of the world.”

But it also stressed the importance of relations with Cuba which, it said, “have disproportionately dominated U.S. policy toward the LAC region for years (and) have hindered Washington’s ability to work constructively with other countries.”

“Political change in Washington, combined with demographic and ideological shifts in the Cuban American community and recent leadership changes in Cuba itself, offer a valuable opportunity to change course,” the report stated.

It called on Obama to, among other steps, lift all restrictions on travel to Cuba by U.S. citizens; remove caps on remittances by Cuban Americans to their families on the island – something Obama promised to do during the campaign; take Cuba off the State Department’s list of state sponsors of terrorism; end restrictions on humanitarian aid in cases of natural disasters; and re-integrate Cuba into regional and global economic and political organisations.

“These recommendations will not be uncontroversial,” noted Pickering, who retired form the Foreign Service with the highest rank of career ambassador in 2001. He added that Washington’s decades-long efforts to isolate Havana had helped its rulers “be the jailers of the Cuban people.”

The report also called for easing its hostility toward Venezuela’s Chavez, urging a “calibrated, nonconfrontational approach in its relations with Venezuela…based on mutual respect and nonintervention in each other’s internal affairs and those of neighboring countries.”

On migration, it called for establishing ministerial-level coordination between the U.S. and key migrant-sending countries; establish a new visa system to encourage circular migration patterns; enact legislation to provide a path to legal status in the U.S. for undocumented immigrants without a criminal record; and facilitate remittances.

The Commission, according to Zedillo, agreed that recent repressive U.S. actions, including the construction of what he called the “abominable” and “profoundly offensive” wall along parts of the U.S.-Mexican border, “will make the problem worse”.

On drugs and organised crime, the report called for a hemispheric dialogue and evaluation of specific anti-drug measures; a substantial increase in funding for programmes to treat drug-offenders and reduce demand; a greater emphasis on promoting alternative livelihoods for those affected by eradication efforts.

“What we have been doing until now [has been] a total failure,” Zedillo said, with respect to the drug war.

To promote the proposed partnership, the report called for the creation of the A8 that would be modeled on the Group of Eight most powerful western nations and Russia that in recent years have set much of the economic and political agenda for global institutions.

At a press briefing on the report, Pickering suggested that there could be some permanent members, and others, including oft-neglected Caribbean nations, which would rotate in and out.

2 Responses to Report: US Hegemony in Latin America Is Over