Warning sign: TxDOT’s funding shortfall is 50 percent of its budget. 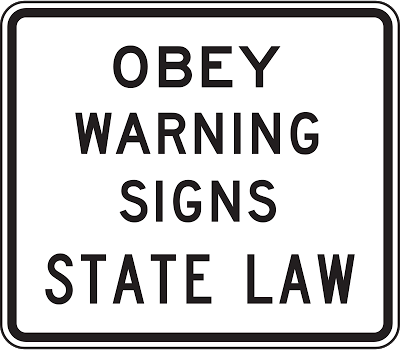 “Things can become complicated when you actually try to understand them.” — Richard Vodra

This is the first of a two-part series.

AUSTIN — The funding shortfall at the Texas Department of Transportation (TxDOT) is about 50% of its entire budget. How did it ever come to this? TxDOT’s roads are now at war with our schools, nursing homes, and health clinics in the Texas legislature, all fighting for survival level funding.

There is great pressure to use an official increase in state revenue to restore the big cuts made to education, health, and human services in the last Texas budget. Every sort of social and governmentally funded need is competing for a piece of the budget increase since Texas Comptroller Susan Combs recently declared a substantial increase in available state revenues compared to the last budget two years ago.

This coming budget battle leads us to an important policy question concerning TxDOT and its roads. How could anyone even hope to manage a state agency that, according to it own management, falls 50% short of its needs? Yet this is the situation described by TxDOT Director Phil Wilson as the Texas Legislature prepares to meet, wheel and deal, and eventually to hammer out TxDOT’s two year budget allotment.

One way to lobby for road money, although they can’t call it that, is by inflating future hypothetical travel and road construction needs. TxDOT director Phil Wilson describes the situation this way:

TxDOT needs an additional $1 billion-a-year alone to shore up its maintenance budget, he said. And going forward, the agency will likely need another $3 billion-a-year infusion to its current $10 billion annual budget to “address congestion long-term with a sustainable method.”

The reality is that TxDOT’s proclaimed road construction needs of $3 billion a year are utterly unfundable pipe dreams appealing to road builders and land developers. By contrast, the estimate of $1 billion a year in maintenance shortfalls is probably way short, but maintenance lacks political sex appeal. In fact, Texas road maintenance has been underfunded to such a degree that “Texas received a ‘D’ in roads, ranking Texas from 17th in 2008 to now 43rd for highway spending per capita.”

Lets take TxDOT Director Phil Wilson’s claim at face value. If TxDOT’s current budget is $10 billion and needs an added $1 billion in maintenance, and another $3 billion to deal with congestion, that means that TxDOT is already about 40% short. This picture of a dire need for money for new roads does not even consider the fact that TxDOT already spent a billion dollars more than it took in last year.

Once you add the $1 billion net deficit for this year, the claimed gap between the available cash and current spending plus claimed needs rises to about 50%! Further complicating this situation is the fact that TxDOT is now about $14.6 billion in debt, and the debt service alone required nearly a billion dollars in 2012. (See pages 13 and 28 of TxDOT’s Annual Financial Report.)

Meanwhile, for accounting purposes, TxDOT is claiming its state roads as assets, all together worth about $64 billion. The reality is that TxDOT’s roads should be seen as constantly growing maintenance liabilities. In the context of high oil prices, a stagnant economy, and reduced driving, TxDOT’s roads are like an oil-addicted, tax money-starved monkey solidly chained to the back of Texas taxpayers for the foreseeable future.

TxDOT offers an important window on Texas politics, both because of the large size of the budget and because of the opportunity for political interests to affect the budget, which can change a lot from year to year, depending largely on legislative whim.

How could things be otherwise? Texas has been ruled since its early days primarily by its landed gentry, first those tied to agriculture, then to the oil interests. A strong focus on “property rights” has been basic to Texas politics ever since the Texas constitution was written, soon after the Civil War, after the Yankee “carpetbaggers” were expelled.

Celebrated Texas journalist Molly Ivins used to call TxDOT “the Pentagon of Texas” for good reason. TxDOT roads have been a political pork barrel for many decades, with all that this implies. In the 1920s, soon after the formation of the  Texas Highway Department, as it was then called, Texas Gov. James E. (Pa) Ferguson got caught up in a Texas road contracting scandal, which forced him to resign and have his wife Miriam A. (Ma) Ferguson become a replacement governor. After this, the Highway Department kept its nose clean for a few decades, particularly under director Dewiltt Greer.

In recent decades, Texas road contractors have regained their old clout as key political players, nowadays in alliance with suburban sprawl land developers. The latter have benefited greatly from publicly funded roads that serve new development ringing the urban areas where most Texans now live. During Gov. Rick Perry’s first term, the big road contractors gave him more than $1 million in campaign contributions. Texas is the kind of state where it is always possible to bribe a politician, as long as you call it a campaign contribution.

Williamson died in 2007, and Perry appointed another close associate, Deirdre Delisi to chair the Commission. A little over a year ago, in September 2011, Perry appointed Phil Wilson, one of his top advisors, to be director of TxDOT and its budget. He was appointed to solve TxDOT’s problems at a time when that agency had become distinctly unpopular with the legislature. With Wilson installed to manage TxDOT policy from the inside, there was no longer the need to control the Commission from the outside. Delisi resigned soon thereafter.

Before Wilson’s appointment, TxDOT directors had all been engineers promoted from within TxDOT’s own ranks. This had the effect of limiting TxDOT’s top management to those good at building roads, but not necessarily those good at politics or balancing budgets. By most accounts, what Wilson brings to the table is smarts and skillful politics. Wilson’s approach seems geared to working harder to raise money to build roads or toll roads as usual. This rather than facing the political reality that the traditionally entrenched transportation solutions and trends are so unsustainable that they demand a basic shift in transportation policy away from roads.

TxDOT has embraced a mountain of new road debt, despite deteriorating finances

It was clear that TxDOT was an agency in deep denial even several years ago when Paul Burka quoted a newly released legislative report on TxDOT in this 2010 blog post:

At present, State Highway Fund revenues are not as stable as in previous years, nor are they continuing to increase at the same pace as in the past. In addition, from 2005 through 2007, TxDOT used a combination of State Highway Fund revenues and bond funding for operations and capital investments. During this period their expenditures for these areas outpaced revenues, resulting in TxDOT using approximately $700 million of reserves to pay for operating and project expenses during this period…

First, when TxDOT bumped up spending through the use of bond funding, baseline expectations for TxDOT spending levels in any given year were raised both inside and outside the organization, even though that approach was not sustainable and represented a marked deviation from historical spending levels. Second, TxDOT incurred a significant debt service burden associated with the bonds it issued — and that servicing reduces the availability of General Revenue and Fund 6 dollars for TxDOT to use for operations and new projects. [In other words, the bondholders had to be paid from the funds — general revenue and Fund 6 — that were being used to pay for the projects.]

The end effect is that TxDOT’s available budget (for maintenance, new projects, etc.) is effectively lower than it would have been before the bond funding was issued. At the same time, maintenance requirements are increasing as a result of having increased the size of the highway system (every new road brought into the system must be maintained).

To which Burka responded:

In other words, the Legislature acted in a fiscally irresponsible manner when it issued several billion dollars in bonds to pay for road projects. By going into debt to build roads, TxDOT ended up with less money for new roads than if it had just used gasoline tax money. This is what happens when lawmakers spurn the pay-as-you-go principle. This is not fiscal conservatism. This is spending beyond your means. You can’t blame TxDOT. The blame belongs with the Legislature and in particular the leadership at the time, Dewhurst and Craddick. And with the voters, who approved the bonds…

Since this was written, not a lot has changed. TxDOT still likes the idea of toll roads, just so long as someone else is responsible for managing them. There has been no discernible shift in policy away from trying to build as many roads as fast as possible. Roads are considered urgently necessary to meet TxDOT’s hypothetical, but always increasing, future travel demand estimates.

A growing number of TxDOT roads are now being built with the help of a sort of road bidding competition. This demands that local government contribute matching funds to help TxDOT pay for construction. With the “pass-through tolling” being encouraged by TxDOT, TxDOT helps by building a road while a county (like Williamson and Hays near Austin) helps front the money. The county gets reimbursed by TxDOT, but ONLY if the projected traffic shows up in TxDOT’s subsequent traffic counts.

As an agency currently in obvious financial trouble, TxDOT is doing whatever it can to shift its debt burden toward private lenders, toward local level government, and toward making roads a general obligation of Texas government.

In Part 2 of this series we will take a closer look at why TxDOT’s denial of current trends is leading to financial disaster.