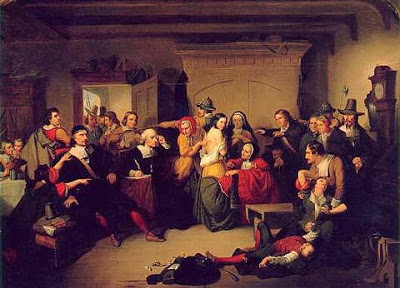 ‘Examination of a Witch,’ by T.H. Matteson 1853 / Courtesy of the Peabody Essex Museum. Blaming it all on witches is not without precedent.
Sarah Palin Linked Her Electoral Success to Prayer of Kenyan Witch Hunter Thomas Muthee
By Hannah Strange / September 18, 2008

Also read ‘Burn Her! Why it’s dangerous to be a witch in a recession’ by Tim Harford, below this article.

The pastor whose prayer Sarah Palin says helped her to become governor of Alaska founded his ministry with a witch hunt against a Kenyan woman whom he accused of causing car accidents through demonic spells.

At a speech at the Wasilla Assembly of God on June 8 this year, Palin described how Thomas Muthee had laid his hands on her when he visited the church as a guest preacher in late 2005, prior to her successful gubernatorial bid.

“And I’m thinking, this guy’s really bold, he doesn’t even know what I’m going to do, he doesn’t know what my plans are. And he’s praying not “Oh Lord, if it be your will may she become governor,” no, he just prayed for it. He said, “Lord make a way and let her do this next step. And that’s exactly what happened.”

She then adds: “So, again, very, very powerful, coming from this church,” before the presiding pastor comments on the “prophetic power” of the event.

An African evangelist, Muthee has given guest sermons at the Wasilla Assembly of God on at least 10 occasions in his role as the founder of the Word of Faith Church, also known as the Prayer Cave.

Muthee founded the Prayer Cave in 1989 in Kiambu, Kenya, after “God spoke” to him and his late wife, Margaret, and called him to the country, according to the church’s Web site.

The pastor speaks of his offensive against a demonic presence in the town in a trailer for the evangelical video “Transformations,” made by Sentinel Group, a Christian research and information agency.

“We prayed, we fasted, the Lord showed us a spirit of witchcraft resting over the place,” Muthee says.

After the spirit was broken, the crime rate dropped to almost zero and there was “explosive church growth” while almost every bar in the town closed down, the video says.

The full “Transformations” video featuring Muthee’s story has recently been removed from YouTube, but the rest of the story is detailed in a 1999 article in the Christian Science Monitor, as well as on numerous evangelical Web sites.*

According to the Christian Science Monitor, six months of fervent prayer and research identified the source of the witchcraft as a local woman called Mama Jane, who ran a “divination” center called the Emmanuel Clinic.

Her alleged involvement in fortune-telling and the fact that she lived near the site of a number of fatal car accidents led Muthee to publicly declare her a witch responsible for the town’s ills and order her to offer her up her soul for salvation or leave Kiambu.

Says the Monitor, “Muthee held a crusade that ‘brought about 200 people to Christ.'” They set up around-the-clock prayer intercession in the basement of a grocery store and eventually, says the pastor, “the demonic influence — the ‘principality’ over Kiambu — was broken,” and Mama Jane fled the town.

According to accounts of the witch hunt that circulated on evangelical Web sites such as Prayer Links Ministries, after Muthee declared Mama Jane a witch, the townspeople became suspicious and began to turn on her, demanding that she be stoned. Public outrage eventually led the police to raid her home, where they fired gunshots, killing a pet python they believed to be a demon.

After Mama Jane was questioned by police — and released — she decided it was time to leave town, the account says.

Muthee has frequently referred to this witch hunt in his sermons as an example of the power of “spiritual warfare.” In October 2005, he delivered 10 sermons at the Wasilla Assembly of God, the audio of which was available on the church’s Web site until it was removed around the time Palin’s candidacy was announced. The blog Irregular Times has listings and screen grabs of the sermons.

It was during these sermons that Palin, who was then preparing for her gubernatorial run, was anointed by Muthee. His intercession, she says, was “awesome.”

Her June 8 speech was to mark the graduation of students from the Wasilla Assembly of God’s Masters’ Commission, which, as Pastor Ed Kalins explains, believes Alaska will be the refuge for American evangelicals upon the coming “End of Days.” After her speech, Palin was presented with an honorary Masters’ Commission diploma.

© 2008 The Times of London UK All rights reserved.

*This video, “Transformations: A Documentary Trailer,” can be seen here on YouTube, but embedding has been disabled so we can’t post it.

Source / The Times of London / AlterNet

Here is a video of Sarah Palin discussing her experience with witch-hunting pastor Thomas Muthee:

Why did people murder suspected witches in Renaissance Europe? And why do they still do so today in sub-Saharan Africa? As someone whose main source of information about witch trials is Monty Python and the Holy Grail, I was fascinated to learn that witch-burning has its own grim economics.

Clearly, some of the fervor for murdering women—typically elderly widows—had cultural and religious origins. In the early medieval period, the Catholic Church dismissed the idea that witches had supernatural powers, and some church documents argued that it was heresy to believe in witchcraft. Without church support, it’s easy to see why witch trials were not popular.

Yet when the trial and execution of suspected witches surged in the mid-16th century and throughout the 17th, it was a cross-cultural phenomenon. Trials took place in many countries and were conducted by both Protestants and Catholics, and in both secular and religious courts. Perhaps a million women were killed across Europe after being accused of witchcraft, and most of them died during this period. Why?

Historian Wolfgang Behringer has one possible explanation: Temperatures dropped sharply around the time that the trials gained in popularity. The “little ice age,” in which average temperatures fell by about 1 degree Celsius, was enough to freeze the Thames River on many occasions.

Emily Oster, an economist at the University of Chicago, has tried to gather systematic data on the link between witch trials and the weather. The results look striking: Between 1520 and 1770, colder decades go hand-in-hand with more trials. The link may be simply that witches were often blamed for bad weather. Or there may be a less direct link: People tend to lash out in tough times. There is some evidence, for instance, that lynching was more common in the American South when land prices and cotton prices were depressed.

Such deaths are, sadly, not a historical footnote. In Meatu, Tanzania, half of all reported murders are “witch killings.” Such murders have been documented elsewhere in Africa, Bolivia, and rural India. The difference between the historical executions and modern attacks are that a Tanzanian “witch” typically dies at the hands of her own family. The machete is the weapon of choice.

Edward Miguel, an economist at the University of California, Berkeley, and co-author of Economic Gangsters, a book about the economics of crime, corruption, and war, has studied the Tanzanian situation. He argues that there is a direct economic motive for the attacks. Tough times in a Tanzanian household may well result in starvation, and the elderly—especially women—are at risk of being sacrificed to free resources. As evidence, Miguel points out that victims of witch attacks in Meatu district—almost all old women—tend to be from the poorest households. The murders are much more common during years of drought or flood.

If the problem truly is an economic one, the solution might be, too. One possibility is to give the elderly generous pensions. Witch killings all but stopped in South Africa’s North Province after such a pension scheme was introduced in the early 1990s. Unfortunately, such pensions are probably too expensive for Tanzania.

A grass-roots alternative has emerged in another Tanzanian district, Ulanga, where traditional healers “cure” elderly women of witchcraft by shaving their bodies and smearing their pates with “anti-witchcraft paste.” Miguel does not think it’s a coincidence that the healers also provide the women with food and shelter during famines, in expectation of payments from their families in better times. Spiritual ceremony meets social insurance: It’s a solution, of sorts.