School Project Suppressed Because Harvey Milk Is the Subject

Try to tell me that we don’t live in a supremely repressive society. When a school report about a well-known American public servant is suppressed, you can’t possibly convince me that we are not headed down the wrong road. 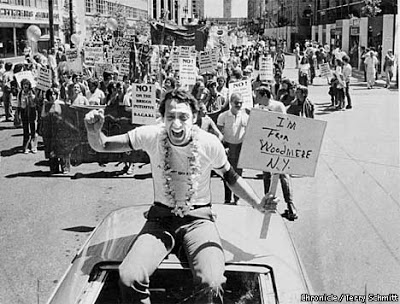 Harvey Milk is the subject of a 6th grader’s school report, and a potential ACLU lawsuit.
Student’s Harvey Milk Report Censored By School
By Bethany Sanders / May 25, 2009

Sixth grader Natalie Jones was surprised when she got called into the principal’s office to discuss a Power Point presentation she’d developed for a school project. After all, her project was about a well-known state politician, an historical figure, in fact, whose May 22 birthday was recently designated a “day of significance” in California.

The problem? That figure was Harvey Milk, the first gay man elected to a political office in the U.S. when he won a seat on the San Francisco Board of Supervisors in 1977.

Theresa Grace, principal of Mt. Woodsen Elementary School [in San Diego County, California], which Natalie attends, decided that before Natalie’s fellow sixth graders could learn about Harvey Milk’s life and death, they’d need permission from their parents. She cited a district policy that requires parents give written permission before their children are taught about sex. But Natalie didn’t want to teach her fellow students about sex, she wanted to share what she knew about Harvey Milk.

Ultimately, Natalie was allowed to give her presentation, but not in class. She shared it with eight of her 13 fellow students during a school lunch period. That decision drew the attention of the ACLU, which is considering suing the Ramona school district. “It’s not about sex, it’s not about sex education. It’s a presentation about a historical figure who happened to be gay,” says David Blair-Loy, legal director of San Diego county’s ACLU.

The ACLU would like to see the district apologize to Natalie and let her share her presentation in class. And then, they want the district to clarify their sex ed policies. “Harvey Milk was an elected official in this state and an important person in history,” says Natalie’s mom, Bonnie Jones. “To say my daughter’s presentation is sex education because Harvey Milk happened to be gay is completely wrong.”

This entry was posted in RagBlog and tagged Censorship, Discrimination, Education, Gay Movement. Bookmark the permalink.