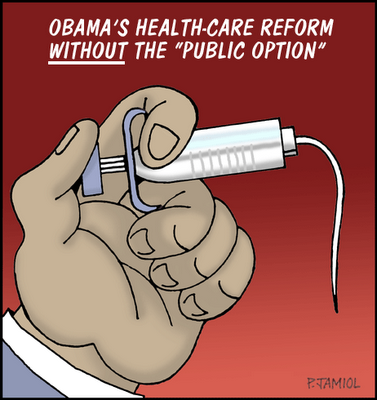 Cartoon from The Political Carnival.
The Senate health care bill:
Time to put it out of it’s misery?

According to the United Nations Declaration of Human Rights,

“Everyone has the right to a standard of living adequate for the health and well-being of himself and his family, including food, clothing, housing and medical care and necessary social services, and the right to security in the event of unemployment, sickness, disability, widowhood, old age or other lack of livelihood in circumstances beyond his control.”

The Human Development Index is a comparative measure of life expectancy, literacy, education, and standards of living for 177 countries worldwide. It is a standard means of measuring well being and especially child welfare. It is intended to distinguish whether the country is a developed, a developing, or an underdeveloped country, and also to measure the impact of economic policies on quality of life.

The latest update to the Human Development Index was released on December 18, 2008. The United States rated fifteenth, following Iceland, Norway, Canada, Australia, Ireland, Netherlands. Sweden, Japan, Luxembourg, Switzerland, France, Finland, Denmark, and Austria. There is some solace in the fact that we’re ahead of the United Kingdom, Poland, Mexico, Cuba and Panama. The nations listed ahead of the United States all have universal quality health care and are largely secular societies with very active social democratic parties. Of course, it may just be coincidence…!

I write this Rag Blog column in an extreme state of dejection. I tend to agree with Dr. Howard Dean, whom I have followed since his presidential bid in 2000. Dr. Dean has announced his position that the Senate should abandon its effort to pass health care legislation since the remaining, battered, deceitful legislation is nothing better than a taxpayer giveaway to the health insurance industry. However, in view of Saturday’s release of the full legislation, of which I have read only a summary, it is probably wise to reserve final judgment until the debate is complete, the behind the scenes deals revealed, and a vote taken.

The Senate has proven itself corrupt, disingenuous, without honor, and below contempt, save for a handful of progressive idealists who somehow became party to this den of thieves. I imagine myself at a rural Mississippi dog fighting pit, with the locals still cheering, and looking down on a pit bull at the end of the contest — pathetic, lacerated and bleeding.

It would appear to be time to put the poor animal out of its misery. However, we should await final developments before making a final decision about this legislation. It is clear, though, that what was supposed to correct the health care crisis in our nation instead has evolved into a giveaway of taxpayer money to the health insurance and pharmaceutical industries — similar to what was done in 2003 when Medicare Part D and Medicare Advantage were created to underwrite the private insurance and pharmaceutical industrues, under the aegis of the Bush administration, with taxpayer funds.

We have had absolutely no positive leadership from the president in the health care debate. Yes, he mouths platitudes and provides photo ops; however, from the beginning he has kept the true health reformers, especially the doctors, nurses, and other health professionals, at a distance, and has chosen to give his attention to, and receive favors from, the health cartel executives, the PhARMA lobbyists, and such true believers as senators Leiberman, Snow, Nelson, Baucus, and their ilk.

There has been little evidence of the Obama of the presidential campaign: no visionary, no man of the people, but merely an individual who has simpered in front of the corporate masters of our country.

Throughout the ongoing discussion of health care reform, the physician’s voice has been largely absent. For some 20 years the 17,000 members of Physicians for A National Health Program have engaged in an in-depth study of national health care. These dedicated folks feel that once again, after years of domination by non-professional agencies, that our citizens deserve compassionate, informed health care, free of the dictates of a for-profit insurance company. No more rationing of care on the basis of one’s ability to pay.

As the legislation stands now there is no vehicle to provide care for the uninsured and the underinsured. There is no antitrust legislation to control the price manipulations of the health insurance industry. The adherents rationalize that it will cover the folks with pre-existing conditions, but omit the fact that, in such instances, the cost to the individual may be three times the normal charges. There are no hard and fast regulations to control the yearly payments for care of a cancer patient, for example, with the insurer having the option to set a yearly limit on medical payments.

Further, it isn’t even clear in the Senate legislation what percentage of the premium collected will actually be paid out for medical care, and how much can be set aside for executive salaries, stockholder dividends, lobbying, and advertising. Currently only 81% of subscriber premiums actually go to health care costs. If the insurers spent 90% or 95% of the subscribers’ money on health care they could give their customers between $54 and $94 billion in rebates on premiums, according to Jason Rosenbaum, writing in The Seminal.

As I have previously noted, the constitutionality of such a law is questionable; however, it could take years to get a challenge through the court system and in the meantime poor folks will be required to spend approximately 12% of their income, amounting to a considerable wage cut, on Washington mandated health insurance. And the policies these folks receive will come at a cost they can’t afford — policies with very high deductibles and high co-insurance. I must agree with Keith Olbermann who suggests that such a bill — written for the benefit of the insurance cartel — could result in widespead individual civil disobedience.

The other very sad development is the Senate’s refusal to set aside the current legislation that forbids the individual to import prescription pharmaceuticals. It’s amazing that senators thought of as progressives voted to refuse the public this right. Of course, we cannot say exactly why they voted in this manner; however, there is no reason to assume that the financial corruption that is inherent in this august body should not reach certain of its progressive members.

And then there is the old ploy: tell the public that imported medications are not safe. Yet, the current pharmaceutical manufacturers are multinational corporations who produce their brand name drugs throughout the world, but package them in the United States and the uninformed public thinks that they are buying a made-in-the-USA product.

Humbug! Prescriptions cost 3-4 times more in the United States than they do in Canada or Europe. Other nations have prescription price control; hence, the manufacturers love to do business in the USA. The Canadian pharmaceutical oversight is probably much stricter than that inherent in the Bush era FDA. I know about this personally because I previously obtained medication for my prostate cancer through a Canadian pharmacy. Happily the product is now generic and can be purchased relatively reasonably in this country.

An excellent review of the sell out of health reform appears in SocialistWorker in an article by Andy Coates, M.D, a member, like myself, of Physicians for a National Health Program.

Meanwhile, even if some legislative miracle were to occur and a version of the House bill became law, a Harvard Medical School Study, as cited in the The Raw Story, indicates that during the time before legislation incorporating the public option would take effect, an estimated 135,000 citizens and over 6,600 U.S. veterans would die. Further, with the House bill, even after uninsured Americans begin to receive health care, there would still be another 18 million not covered. We must remember even the House legislation would not come into effect until 2013 or 2014.

In the meantime PNHP reports that the stocks of WellPoint, Cigna, and United Health have surged to a 52 week high. This is their reward for $53 million invested in lobbying in the first three quarters of 2009. The Raw Story points out that the White House has met early and often with these lobbyists. The author cites a plethora of CEOs and lobbyists of Blue Cross Blue Shield, Kaiser Health Plans, and heads of PhARMA , The American Hospital Association, and pharmaceutical companies SanofiPasteur, Takeda Pharmaceuticals America, Pfizer, and Amgen.

In the meantime we in the progressive community are seeking some purpose, some common ground. Yet I am haunted by Eric Hoffer’s long ago observation: “Men of thought seldom work well together, whereas between men of action there is usually an easy camaraderie. Teamwork is rare in intellectual or artistic undertakings, but common and almost indispensable among men of action.”

A worry, yes, but also a fear. A recent poll shows some 40% of Americans either consider themselves “tea-baggers” or are sympathetic towards the tea-baggers — those folks unwittingly following the pied piper of big business. We progressives may smile and make sport of these people, but l remember that some years ago a more cultured, better educated society than ours, at a time of financial and societal turmoil, led and misled by corporate interests, followed a wall paper hanger into the abyss.