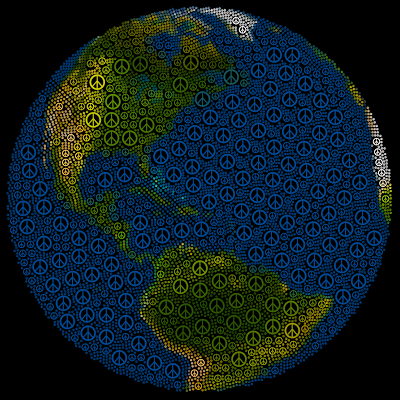 The life of our planet must not be a flash in the pan, a brief streak of light in time’s expanse. Our ancient Mother deserves a future of infinite history, and so do we, her youngest children.

On Earth Day, I contemplated the pre-dawn sky, looking for shooting stars. The evening prior, my partner and I had scouted out a viewing spot adjoining a vacant lot just a few blocks from home. Though we live in a central neighborhood, the clear air and waning moon offered favorable viewing conditions for the Lyrid meteor shower even from our urban vantage point.

In a warm climate, the transition between night and day is a time of rejuvenation for the earth, when ground water rises into plant stems, pushing them upward. Planted in my camp chair, gazing upward, I thought I could feel the life force, too — the magnetism of the heavens pulling gently against the gravity that held me down and drew the meteors in.

The night was balmy, and the quiet was actually filled with sound: insects humming, a mockingbird singing his brilliant medley, our neighborhood screech owl trilling his single note. There was some street traffic: a dumpster truck, a few cars and several bicycles that glided by. Above, two planes passed the spot we were watching during the hour we were there.

My partner and I saw six meteors each. The brightest was a burst of light with no visible trail. The others made brief but unmistakable dashes between the constellations. We welcomed each silent flash with an exclamation. Did the mockingbird and the owl see them, too?

Staring into space makes me think about time. I want the planet to celebrate an uncountable number of future Earth Days. But, the darkest hour reveals the starkest truth: the primary obstacle to the earth’s longevity is the effect of my own species on our shared home.

In a quiet moment of reflection in the film, “An Inconvenient Truth,” Al Gore asks himself, in voiceover, about the barriers that keep human beings from living more sustainably. It would have been the perfect opportunity to discuss the most inconvenient truth: our preoccupation with security is killing us. The drive to keep ourselves “safe” has become the greatest threat to our existence.

Many indicators point to the US Department of Defense as the largest institutional polluter in the world. Most tellingly, the US military is the world’s largest single oil purchaser and consumer. If the invasion of Iraq, and perhaps Afghanistan, was about US oil interests, then military occupation serves mainly to perpetuate the military, like a snake devouring its own tail, feeding and destroying itself at the same time.

War is not only ungreen, it discourages greenness. I sometimes feel ridiculous sorting my recycling and installing low energy light bulbs while the massive pistons of the war machine keep pumping, consuming incalculable amounts of energy for every watt I try to conserve.

On Earth Day eve, Al Gore said that we are now at a tipping point. “This year, 2009, is the Gettysburg for the environment,” he said. It’s interesting that he should use a war metaphor for his call to action. The US Civil War caused untold environmental destruction along with its huge human death toll. All sides lose when home is a battlefield. Now, home encompasses the globe.

We human beings can decide to abolish war. The owl needs its prey, but we do not. Our most basic, most elegant tools are at hand: communication, education, international law, creative arts and sciences, nonviolent resistance. When we are threatened, we have these tools, mightier than the sword, to protect ourselves. In the process, we protect our descendants — and the owl, too.

If the Obama Administration is urging us to look forward, then we must take the long view of the future. The long view means valuing the history lesson along with the brain-storming session. If we care what happens to our progeny ten generations from now, we’ve got to consider the trajectory from ten generations back as equally relevant.

The life of our planet must not be a flash in the pan, a brief streak of light in time’s expanse. Our ancient Mother deserves a future of infinite history, and so do we, her youngest children. To celebrate our common Mother’s Day, let’s give her bicycles, sustainable agriculture, windmills, solar panels, rain barrels. Because it makes no sense to give her bicycles with one hand and bombs with the other, it’s time to acknowledge that the critical point we have reached is not a call to arms, it’s a call to lay them down.

Martin Luther King, Jr. said it more directly when he told the United States that our choice was between nonviolence and non-existence. This is our Montgomery moment, our Letter from a Birmingham Jail. The planet can’t wait, and neither must we.

[Susan Van Haitsma, an Austin resident, is a regular contributor to The Rag Blog. She also blogs as makingpeace at Statesman.com and at makingpeace. This article was also published by CommonDreams.]