Taking the Bible to Court 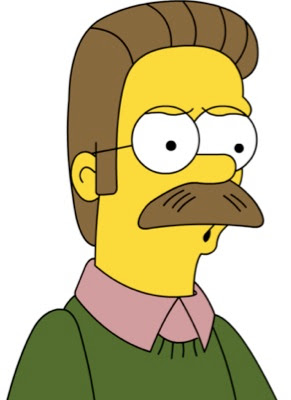 Ned Flanders of The Simpsons agrees with Bible publishers Zondervan and Thomas Nelson that homosexuals are “wicked” and won’t go to Heaven.
Bible Publishers Sued for Anti-Gay References
By Rick Pedraza / July 10, 2008

A Michigan man is seeking $70 million from two Christian publishers for emotional distress and mental instability he received during the past 20 years from versions of the Bible that refer to homosexuality as a sin.

Bradley LaShawn Fowler, a gay man, claims his constitutional rights were infringed upon by Zondervan Publishing Co. and Thomas Nelson Publishing, both of which, he claims, deliberately caused homosexuals to suffer by misinterpretation of the Bible.

According to a USA Today report, Fowler’s two separate suits against the publishers claim the intent of the Bible revisions that refer to homosexuals as sinners reflect an individual opinion or a group’s conclusion.

Fowler says the deliberate changes made to first Corinthians, chapter six, verse nine caused him “or anyone who is a homosexual to endure verbal abuse, discrimination, episodes of hate, and physical violence … including murder.”

Fowler, who is representing himself in both lawsuits, claims the publishers are misinterpreting the Bible by specifically using the word homosexuals, which made him an outcast from his family and contributed to physical discomfort and periods of demoralization, chaos and bewilderment.

“These are opinions based on the publishers and they are being embedded in the religious structure as a way of life,” he tells a local NBC TV station affiliate in Grand Rapids.

Fowler admits that every Bible printed is a translation that can be interpreted in many ways, but he says specifically using the word “homosexual” is not a translation but a change.

Fowler says Zondervan Bibles published in the ‘80s used the word homosexuals among a list of those who are “wicked’ or unrighteous and won’t inherit the kingdom of heaven.”

Zondervan, for its part, issued a statement to the Grand Rapids press stating it does not translate the Bible or own the copyright for any of the translations it publishes

“We rely on the scholarly judgment of the highly respected and credible translation committees behind each translation and never alter the text of the translations we are licensed to publish,” the statement reads.

“We only publish credible translations produced by credible Biblical scholars.”

U.S. District Judge Julian Abele Cook Jr., who will hear Fowler’s case against Thomas Nelson, says the court “has some very genuine concerns about the nature and efficacy of [Fowler’s] claims.”