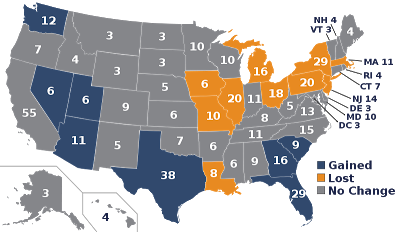 The Electoral College and the popular vote

For the last 60 years or more a majority of Americans have been in favor of the direct election of the president, where the candidate with the most votes nationwide would be elected. This has been shown by surveys done by the Gallup Organization since 1944.

But the politicians don’t want that. They know that even if they lose the national vote they can still get their party in the White House by winning enough states to get a majority of the electoral college vote (where each state gets the number of votes equal to its number of senators and representatives, and the District of Columbia gets three votes).

John Quincy Adams, in the 1824 election, was the first president elected without getting more popular votes than his opponent (Andrew Jackson). Jackson bested Adams in both popular and electoral votes. But Jackson was unable to get a majority of electoral votes, and the House of Representatives chose Adams. Since that time, there have been three presidents elected by the electoral college even though their opponents had more popular votes. They are:

In 2008, Barack Obama won the electoral college (and the popular) vote. He received 365 electoral college votes to 173 for his opponent, John McCain. The question now is this: can President Obama get another majority of the electoral college vote in 2012? At the current time I would have to give him the advantage, but it is anything but certain. It will depend on who Americans blame for the poor economy and high unemployment (both of which will still be around in November of next year).

At the present time there are 16 states and the District of Columbia that have consistently given President Obama a 50% or better approval rating in the polls. Barring an unforeseen disaster of some kind, it is likely that the president will win the electoral votes of those entities. These electoral entities are (with their electoral votes in parentheses): District of Columbia (3), Connecticut (7), Maryland (10), Delaware (3), New York (29), Massachusetts (11), Hawaii (4), Vermont (3), Illinois (20), New Jersey (14), California (55), Minnesota (10), Rhode Island (4), Maine (4), Michigan (16), Washington (12), and Wisconsin (10).

If President Obama wins all of those, and there’s no real reason to believe he won’t, then he will have 215 electoral votes. That’s a good start, but still 55 votes short of the 270 votes needed. There are 23 other states which are extremely likely to vote for the Republican candidate in 2012. Those states have 168 electoral votes.

Can the president get 55 electoral votes out of those states? Republican governors are giving him some help in a couple of the biggest states — Florida and Ohio. Both elected Republican governors in 2010, but those governors have become very unpopular with the electorate because of their institution of teabagger policies (which have favored the rich and hurt ordinary citizens). Those states could be ready to return to the Democratic column.

Other good possibilities are Oregon, New Mexico, and Colorado. But any way you slice it, it looks like the 2012 election is going to be much closer than the 2008 election was (at least electorally).

Personally, I wish we could elect our president by the popular vote. But that’s not going to happen before the 2012 election (and probably not anytime in the near future either). So for now, I guess we’ll just have to watch and see how the electoral college ball bounces.