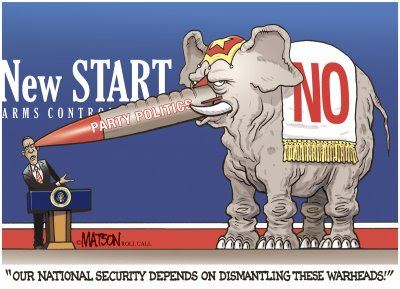 UPDATE: December 22, 2010 — The New START arms control treaty with Russia was ratified by the Senate today by a 71-26 vote, with 13 Republicans crossing the aisle to support it. But they did so in defiance of the Republican leadership which opposed the treaty to the end — after making unsuccessful attempts to sabotage it with amendments that would have made the treaty unacceptable to the Russians.

The Republicans, the START Treaty,
and the “No” game

Congressional Republicans are treating the issue like another political football.

It looks like the Republicans are still playing the “No” game, where they try to delay or stop anything President Obama tries to accomplish. The difference this time is that their obstructionism will make life more dangerous — both for Americans and for those living in other countries. That’s because this time their little game may determine whether the number of nuclear weapons in the world is reduced or increased.

Last April the United States and Russia agreed, after serious negotiations, on a new Strategic Arms Reduction Treaty (START). The new treaty, signed by Presidents Obama and Medvedev, would reduce the strategic nuclear weapons of both countries by an additional 30%. There is little doubt that the Russians will confirm the treaty, since Putin gets whatever he wants from the Russian Duma (legislature). The only doubt is whether the U.S. Senate will ratify the treaty.

It takes a two-thirds vote of the Senate to ratify a treaty with another country, and although a clear majority of the Senate is in favor of ratification, it remains to be seen whether the magic number of 67 can be reached. That’s because many Republicans, including the party leadership in the Senate, have come out against approving the treaty. One senator even had the temerity to suggest there is no reason to rush into approving the treaty — although voting on the treaty eight MONTHS after both presidents signed it can hardly be called a rush to judgment.

In addition, all of the former (and the current) Secretary of States (including the ones who served in Republican administrations) have come out in favor of the treaty. And all of our NATO allies (who are probably in more danger from Russian weapons than we are) are in favor of the treaty. In fact, it seems that the only opponents of the START treaty are some Congressional Republicans, and they’re treating the issue like another political football. They just don’t want to let President Obama have any kind of accomplishment — even one that makes the world a little safer place.

The Republicans seem to think they can kill the treaty (showing their fringe right-wing base how anti-Obama they are) and nothing will really change with the world balance of power. Unfortunately, that’s just not true. The Republicans have tried to amend the treaty, but that is just an effort to kill it. Any amendment would mean the two countries would have to go back and negotiate all over again, and the Russians are in no mood to do that.

Russian Foreign Minister Sergei Lavrov said, “The START agreement, which was drafted on the basis of strict parity, completely meets the national interests of both Russia and the United States. It cannot be reopened, becoming the subject of new negotiations.” Putin, the real power in Russia, went even further. He said the failure to ratify the treaty would be “dumb,” and would most likely be the start of a new arms race — he said Russia would have to take some kind of action in response.

So things are not going to stay the same no matter what the Senate does. If they ratify the treaty, nuclear arms will be reduced by a significant 30%. If they don’t, the Russians are likely to increase their nuclear weapons total (and we would probably do the same) — putting the Doomsday clock a few minutes closer to midnight. And I couldn’t really blame the Russians if they reacted in that way.

It is extremely important that the United States ratify this treaty, especially after all the international relations that were seriously damaged by the Bush administration. It is critical that President Obama be viewed by the world as restoring the United States as a trustworthy partner in establishing world peace (and that he be viewed as having the internal power to do that). If the Republicans are able to kill the treaty it will damage our relations abroad — among our friends and our enemies.

It looks like the vote will be close [though things are looking better as of this writing]. All of the Republican’s “poison pill” amendments have been easily defeated, but not by two-thirds votes (like the treaty would need for ratification). The Democrats say they have 57 votes from their own caucus (55 Democrats and both independents — Sanders and Lieberman). Wyden (Oregon) is absent because he just had cancer surgery. That means 10 Republican votes will be necessary for ratification.

According to Sen. Schumer (New York), there are currently five Republicans who say they will vote for the START treaty — Cochran (Mississippi), Collins (Maine), Snowe (Maine), Voinovich (Ohio), and Lugar (Indiana). That means five more Republican votes will be needed, and it’s anyone’s guess as to who they will be or whether it’s even possible.

Even though I think it’s bad politics, I can sort of understand the Republican desire to obstruct President Obama from accomplishing anything. But this time they’ve stepped over the line. This time they’re playing a dangerous game of international political chicken. I wonder if they know that — or even care.