Tell Junior to Stop Lying to Us 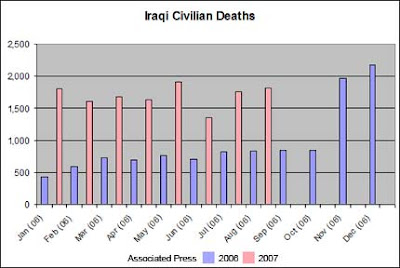 It took some time and effort, but, with the aid of TPM readers, we’ve obtained two complete lists of monthly Iraqi civilian casualties from January 2006 forward. Taking these numbers on their own terms, they do not bear out the claims made by the Bush administration and U.S. military that the surge has reduced Iraqi civilian casualties. Comparing each month’s death toll in 2007 to the death toll from that same month in 2006, the numbers show that surge has not made Iraq safer for the civilian population. By some measurements, Iraqis are in greater danger than a year ago.

It’s a sign of how skewed the debate over the Iraq War is that these numbers are not readily available. Different Iraqi government agencies present different casualty figures. The U.S. military’s own casualty total is said to rely on the Iraqis, but it’s unclear which Iraqi agency it uses or what adjustments are made to the Iraqi figures. Even as today’s testimony from General David Petraeus and Ambassador Ryan Crocker is considered a possible make-or-break moment for U.S. policy on Iraq, with the Bush Administration and the Pentagon touting the success of the surge in reducing civilian casualties, there is no general agreement on what civilian casualties have been or on what the most accurate methodology for tallying casualties is.

The two lists presented here rely on statistics gathered by the Associated Press and by Iraq Body Count, a reputable British organization that has done Herculean work in compiling civilian-casualty data. It’s important to note that these lists aren’t comprehensive. Tallying Iraqi civilian casualties is an incomplete and arduous task, made extremely difficult by the situation on the ground. Both surveys readily acknowledge that their figures are undercounts of the true Iraqi civilian casualty rate. But the significance of these two charts is that each study employs its own internally consistent methodology for determining Iraqi casualties and has done so over a significant period of time, allowing an independent assessment — albeit imprecise — to measure against what we’ll hear from Petraeus and Crocker.