The Earth : Love it or Lose it, Part III

The following from the Eurupean Tribune is long, but very informative. There is some doubt as to the leap from capacity (energy developed under ‘standard conditions’) to portion of power available over time, but it’s probably a good ball-park estimate.

[This is the third installment of a series on The Rag Blog designed to take a serious look at the threatened ecology of the earth and explore ways to address the problem.]

On Monday, May 12, the U.S. Department of Energy released its long-awaited report on wind energy 20 Percent Wind Energy by 2030. Fortunately, two weeks ago the American Wind Energy Association (AWEA) accepted my media credentials from epluribusmedia.com, allowing me to attend a special seminar and workshop in Des Moines, Iowa, on the supply chain problems and opportunities of an incipient boom in wind generated electricity.

Wind has the potential to meet most if not all of U.S. electricity needs within the next two to three decade, if – IF – we can surmount significant obstacles caused by the “post-industrial” neglect and withering of the U.S. manufacturing base. Contrary to the unrealistic beliefs of many who yearn for clean energy, heavy industry is absolutely essential to the development of wind powered electricity generation. For example, 114 tons of steel are required for every megawatt of wind energy installed. In fact, the wind turbines now being developed and brought on line are mammoth industrial projects, that dwarf a Boeing 747 passenger jet in size. But only half the content of a wind turbine can now be made in the U.S. We are at the dawn of a new age of clean, renewable energy, but if we are to realize the full potential of this new era, there is no getting around the need to rebuild U.S. heavy industry and manufacturing.

First, let’s get an idea of the scale we’re talking about. The photo below is of a 1.5 megawatt (MW) wind turbine generator built by Suzlon, a company that began in India not that long ago, in 1995. 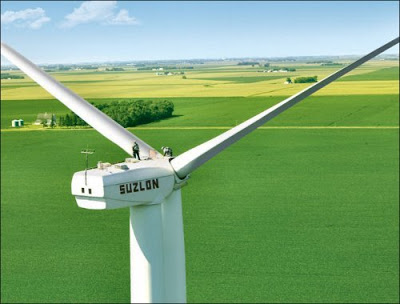 Source: Suzlon Energy Ltd., www.suzlon.com
As you can see, these wind turbines are not your grandfather’s windmills. If you look closely, you will see there are two technicians standing atop the nacelle which is a surprisingly large and crowded working space crammed full of heavy machinery, including the actual generators that produce electricity.

The next two pictures are from the presentation by Daniel Laird, of Sandia National Laboratories. They show how wind turbines have grown in size and capacity from the first Kenetech wind turbines developed and deployed in California in the late 1970s and early 1980s. 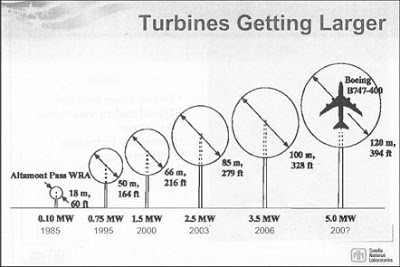 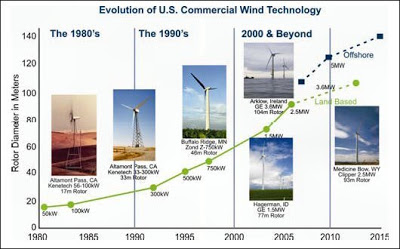 Source: U.S. Department of Energy report 20 Percent Wind Energy by 2030
Laird noted that while the modern wind turbine was developed in the 1970s in California, a lack of interest and support by the federal and state governments allowed the cutting edge of wind technology to shift to Europe in the 1980s and 1990s. Encouraged by a more stable investment climate deliberately created by favorable government policies, a number of European companies emerged, which have increased the size of a typical commercial wind turbine from about 20 meters in tower height to 100 meters; from 25-30 meters rotor diameter to 70-100 meters; and from 100 kilowatts (KW) electricity output from to 5 megawatts (MW).

Today, the country with the most installed wind turbine capacity is Germany, with 22,247 MW. By installing a record 5,244 MW of new wind generated electricity capacity in 2007, the U.S. grew to 16,618 MW (just under 17 gigawatts or GW), overtaking Spain’s 15,145 MW to take second place. AWEA is proudly boasting that 2007 is the first year over one percent of U.S. electricity production was wind generated.

Today, the optimum size for land-based wind turbines appears to have settled at 1.5 MW to 2.5 MW, while offshore wind turbines of up to 5 MW are now being developed, deployed and tested. Wind turbines over 2.5 MW are simply too large to be moved and constructed on land.

For the previous installments in this series by Paul Spencer on The Rag Blog, go here.

This entry was posted in RagBlog and tagged Alternative Energy, Energy, Environment, Sustainability. Bookmark the permalink.