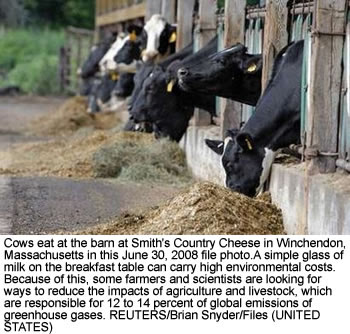 The Climate Costs of a Glass of Milk
by Raúl Pierri

MONTEVIDEO – A simple glass of milk on the breakfast table can carry high environmental costs. Because of this, some farmers and scientists are looking for ways to reduce the impacts of agriculture and livestock, which are responsible for 12 to 14 percent of global emissions of greenhouse gases.

There are already studies to measure the climate costs of that glass of milk, or of a country’s entire milk production, from raising the cow to the final product on the table.The farming sector’s emissions of climate change gases grew nearly 17 percent between 1990 and 2005 worldwide, and the biggest increase took place in the developing South (32 percent).

The intestinal fermentation in ruminant livestock, like cattle, releases into the atmosphere methane and nitrous oxide, two potent greenhouse gases. Further emissions come from animal manure and urine, the burning of plant biomass to clear pastures, rice production and biological and chemical processes occurring in soil.

The two gases contribute 70 percent of the emissions coming from the agricultural sector. Methane and nitrous oxide, respectively, have 21 and 300 times more “greenhouse effect” than carbon dioxide, the principal gas associated with climate change, released primarily by vehicles, industry and electricity production.

That was the focus of discussion amongst officials and researchers gathered in Uruguay Jul. 21-24 for the international workshop on agricultural emissions of greenhouse gases, organised by LEARN. Tierramérica was the only media outlet present for the technical segment of the meeting.

In Uruguay, agriculture generates 91 percent of the country’s methane emissions. In neighbouring Argentina, farming and ranching are responsible for 44 percent of national greenhouse emissions.

Because it involves a sector that is very important to countries like Uruguay, the reduction of emissions must ensure that pasture-raised livestock continue to eat a natural, chemical-free diet, Luis Santos, coordinator of Uruguay’s Climate Change Unit, told Tierramérica. One option is to modify the diet of the animals, using varieties of forage that are less rich in methane, he said.

Pastureland accounts for 26 to 40 percent of the world’s productive lands. And cattle emit 37 percent of the methane and 65 percent of the nitrous oxide generated by human-led activities. The vast majority of these gases come from pastures in Latin America and Asia.

Tim Clough, a scientist from New Zealand, noted that the atmospheric concentration of nitrous oxide continues to rise 0.26 percent annually. Globally, the nitrous oxide output is dominated by agricultural sources, he said, stressing the urgent need to reduce these emissions.

The main sources of nitrous oxide in pastures are manure and nitrogen-based fertilisers. Nitrous oxide is produced in the soil through microbe processes like nitrification or the conversion of ammonium nitrate, according to Clough, an expert in soil sciences from Lincoln University in New Zealand.

Clough suggested, as is being done in his country, the use of nitrification inhibitors, chemical substances added to nitrogen fertilisers (mineral or organic) or applied directly to the soil, which inhibit the activity of bacteria.

LEARN was founded last year in New Zealand, and includes representatives from politics, science and industry from some 40 countries, including agricultural giants like the United States, Brazil, Australia, India, China and Argentina.

Its aim is to define methods for measuring, verifying, communicating and mitigating the production of greenhouse gases from the livestock sector.

“The first objective is, in the context of the Framework Convention on Climate Change, to determine the factors of emissions in order to carry out an inventory of greenhouse gases released by the sector,” explained Santos.

“The countries of the developing South, according to the Convention, must adopt measures but are not obligated, like the industrialised countries, to reduce their emissions. That is why we want to know, for the countries like New Zealand that do have an obligation, how much they emit and how they are going to cut emissions,” he said.

To that end, a New Zealand Project presented at the meeting demonstrated the procedures for tracking greenhouse gases in the farming sector. In milk production, for example, this starts with emissions from the cow itself, to industrialisation and transport.

This entry was posted in RagBlog and tagged Climate Change, Environment, Global Economy. Bookmark the permalink.

1 Response to The High Costs of the Things We Like