The Misrepresentations About the War in Georgia 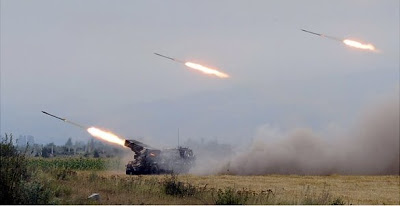 Photo: Time.
Why did the West ignore the truth about the war in Georgia?
By Mary Dejevsky / November 12, 2008

Thank goodness, they might be thinking at the US State Department and the British Foreign Office, for the financial crisis. Were it not for the ever-blacker news about the Western world’s economy, another scandal would be vying for the headlines – and one where the blame would be easier to apportion. It concerns our two countries’ relations with Russia and the truth about this summer’s Georgia-Russia war.

Over the past couple of weeks, a spate of reports has appeared in the American and British media, questioning many assumptions about that war, chief among them that Russia was the guilty party. Journalists from the BBC, The New York Times and Canada’s Embassy magazine, among others, travelled to South Ossetia, the region at the centre of the conflict, in an effort to establish the facts.

Not the “facts” as told by the super-slick Georgian PR machine at the time, nor the “facts” as eventually dragged from the hyper-defensive and clod-hopping communicators of the Kremlin. But the facts as experienced on the ground by those who were there: civilians, the local military commander, and the small number of unarmed monitors stationed in the region by the Organisation for Security and Cooperation in Europe.

The journalists travelled to the region separately and by different routes. They spoke to different people. But their findings are consistent: Georgia launched an indiscriminate military assault on South Ossetia’s main town, Tskhinvali. The hospital was among the buildings attacked; doctors were injured even as they operated.

The timing of the Georgian attack, as of the arrival of the first Russian reinforcements two days later, coincides for the most part with the original Russian version. It was only then that the Russians crossed into Georgia proper in the invasion of sovereign territory that has been universally decried. For the record, it should be added that Russia has now withdrawn from uncontested Georgian territory, in accordance with the agreement mediated by President Sarkozy.

Now you could argue – and the State Department and the Foreign Office have done pretty much from the start – that it really does not matter who started the war; there had long been provocations on both sides and the priority was bringing hostilities to an end. You could also argue – more plausibly – that while Russia might have had a case at the start, it put itself in the wrong by applying excessive force and then recognising South Ossetia and Abkhazia as independent.

But surely it does matter, crucially, how this conflict began. It matters legally and morally. And it is bound, rightly so, to affect how we view the two countries concerned. Yet the general fuzziness of official US and British accounts left the impression that Russia was the guilty party, and Georgia a brave little democracy that big bad Russia wanted to snuff out. Not only did this version gain almost instantaneous acceptance, but it was almost impossible for Russia to contest, confirming as it did every existing negative stereotype.

What has now transpired, however, is that the US and Britain had no excuse for not knowing how the war began. They were briefed by the OSCE monitors at a very early stage, and those monitors included two highly experienced former British Army officers.

So why were British and US officials so cagey about acknowledging, or perhaps even believing, what had really happened? Why did the Conservative leader, David Cameron, rush to Tbilisi to support Georgia as the unquestioned victim? And why – except to trump Mr Cameron – did the Foreign Secretary, David Miliband, give a tub-thumping speech in Kiev shortly afterwards that perpetuated the impression (without actually using the words) that the war was all about Moscow’s supposed ambition to reconstitute its empire?

Was it ignorance? Or was it rather ideological blindness? Did they choose not to acknowledge the unreliability of their Georgian protégé, lest it discredit their whole project for spreading democracy and recruiting allies among former Soviet republics? It is only now, three months on, that either Mr Miliband or US officials have brought themselves to describe Georgia’s action as “reckless”.

Actions, though, tell another story. Earlier this week, Britain quietly lifted its objections to the start of EU talks on a new partnership treaty with Russia – talks that it, almost alone, had held up in sympathy with Georgia. So the latest bout of official harrumphing against Russia would seem to be over. Ill-feeling in Moscow, though, will persist, until someone in London or Washington concedes how badly they got the Russia-Georgia war wrong.

This entry was posted in RagBlog and tagged Foreign Policy, Georgia, War. Bookmark the permalink.

1 Response to The Misrepresentations About the War in Georgia