The Peace Movement’s Many Faces 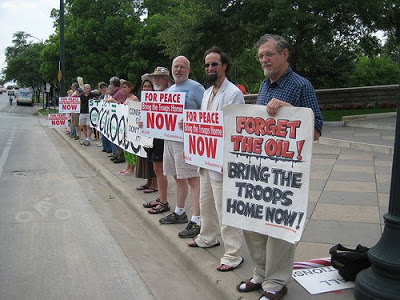 The third Friday of every month has been designated Iraq Moratorium day, and this past Friday, May 16, 2008, was the ninth Iraq Moratorium. Every week thousands of demonstrators throughout the country participate in vigils and direct actions and street theater events on campuses, in small towns and villages, on big city streets.

Above, a silent vigil was held in front of the Texas state capitol building in Austin, with participants from Movement for a Democratic Society (MDS/Austin), CodePink and other groups. The following is a story about a unique bit of agit prop in Madison, Wisc. 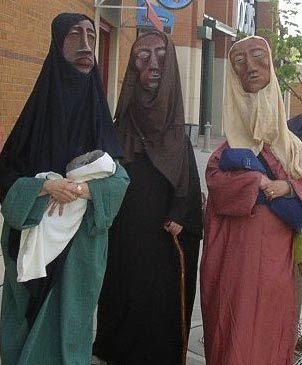 We Mourn the Dead from Iraq
By Joy First

As part of the Iraq Moratorium, eight activists in Madison, WI participated in a solemn vigil at Hilldale Mall on May 16, 2008, calling for an end to the war and occupation in Iraq. This was, in the words of Gandhi, “an experiment in truth” as we pushed to see how far we could go in speaking out against the utter devastation and the crippling suffering of the people of Iraq. Two of us had been in court the day before and were found guilty of trespassing after we were arrested for speaking out against the war at Hilldale Mall in February.

Three of us wore paper mache masks of Iraqi women and long dark gowns and we carried paper mache babies, one who was severely hurt. The masks sat on the top of our heads with scarves over the back of the masks that hung down and came around covering our faces. We could only see faintly as we looked through the light-weight fabric over our face. The expressions on the faces of the masks, the Iraqi women, were haunting.

The other five people in our group handed out leaflets about the suffering of Iraqi women, and carried signs saying “We mourn the dead from Iraq’ as we walked in a slow and solemn procession through the mall. We planned to stay there and march for one hour from 5:30-6:30 pm unless we were arrested before then. There were not a lot of people inside the mall, but those who were seemed very interested in our procession and gratefully accepted a leaflet. A good number thanked us for being there or made other positive comments. It was a very powerful experience, very sad, wearing the masks and carrying the babies who were hurt. I have been spending a lot of time with my grandchildren, including my newest granddaughter, Linnea, just one week old on the day of our action, and I was feeling very emotional thinking about the suffering of the children of Iraq.

Mall security asked us to leave and said we could march outside (which was surprising because I believe that is still private property). We went outside because there were a lot of people eating at outside seating at several restaurants adjoining the mall and we were able to walk by them and hand out leaflets.

When we walked back inside the mall, we met the police and they told us we must leave. We decided to go outside again and the police told us we could stay there as long as wanted, but if we came back inside, there would be a physical arrest. I asked the police if this wasn’t private property outside the mall, and the police said it was not, but I believe they are wrong about that. They explained a physical arrest would mean they would handcuff us, transport us downtown, book us, and we would have to pay bail to be released. We were surprised to hear this. We follow the principles and guidelines of Gandhi, Martin Luther King and others doing nonviolent civil resistance to speak out against the war crimes of our government.

The police in Madison have always arrested us, wrote a citation on the spot, and released us. When we asked why they would respond with a physical arrest, they said that when the bad behavior continues, they have to take us in. Bad behavior??!!?? Us??!!?? I wonder when someone in law enforcement will have the guts to arrest Bush and his cronies for their bad behavior – war crimes against humanity. We walked for a few more minutes and at 6:30 we left the mall. However, we plan to return and continue our commitment to work for peace, calling attention to the devastating human suffering resulting from the crimes of our government.

For new of more events from Iraq Moritorium 9, go to IraqMoratorium.org.

This entry was posted in RagBlog and tagged Agitprop, Austin, Iraq, Peace Movement. Bookmark the permalink.

1 Response to The Peace Movement’s Many Faces