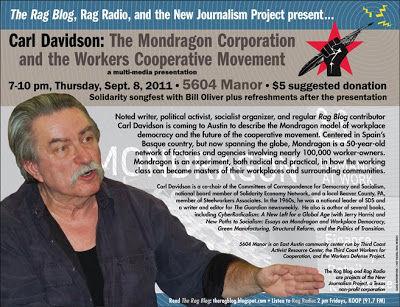 Austin singer/songwriter Bill Oliver will perform.
Refreshments, including beer and wine, will be available.
$5 Suggested Donation

Carl Davidson in Austin:
‘The Mondragon Corporation and
the Workers’ Cooperative Movement‘

The Rag Blog, Rag Radio, and the New Journalism Project present noted writer and political activist Carl Davidson with a multi-media presentation on “The Mondragon Corporation and the Workers’ Cooperative Movement,” from 7-10 p.m., Thursday, Sept. 8, 2011, at 5604 Manor Community Center, 5604 Manor Road, Austin, Texas. There is a suggested donation of $5. After the presentation, Austin musician Bill Oliver will perform live. Refreshments, including beer and wine, will be available.

The Mondragon Corporation is a 50-year-old network of factories and agencies, involving close to 100,000 workers — centered in Spain’s Basque country, but now spanning the globe. Mondragon is an experiment, at once radical and practical, in how the working class can become masters of their workplaces and surrounding communities.

Carl Davidson, a regular contributor to The Rag Blog, is a co-chair of the Committees of Correspondence for Democracy and Socialism, a national board member of Solidarity Economy Network, and a local Beaver County, PA member of Steelworkers Associates. In the 1960s, he was a national leader of SDS and a writer and editor for the Guardian newsweekly. He is also author of several books, including, with Jerry Harris, CyberRadicalism: A New Left for a Global Age, and New Paths to Socialism, essays on worker coops, Marxism and the green economy.

Bill Oliver, known as the “Environmental Troubadour,” is an Austin-based singer/songwriter and entertainer.

5604 Manor is a community center run by the Workers Defense Project, Third Coast Activist Resource Center, and the Third Coast Workers for Cooperation.

The Rag Blog is a progressive internet newsmagazine based in Austin, Texas. The Rag Blog is published by the New Journalism Project, a 501(c)(3) Texas nonprofit corporation. Rag Radio is a weekly public affairs program hosted by Rag Blog editor Thorne Dreyer, Fridays, 2-3 p.m., on KOOP 91.7-FM in Austin.

Carl Davidson will also discuss the Mondragon Corporation and workers cooperatives on Rag Radio, Friday, Sept. 9, from 2-3 p.m. on KOOP 91.7-FM, and streamed live on the World Wide Web.

1 Response to The Rag Blog Presents : Carl Davidson on Mondragon and Workers’ Cooperatives