The Uniqueness of Israel’s Democracy 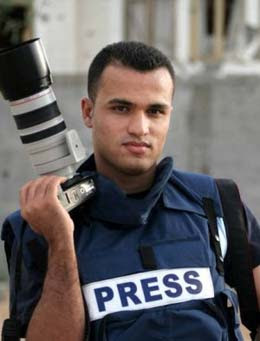 Mohammed Omer
From Triumph to Torture
By John Pilger / July 03, 2008

Two weeks ago, I presented a young Palestinian, Mohammed Omer, with the 2008 Martha Gellhorn Prize for Journalism. Awarded in memory of the great US war correspondent, the prize goes to journalists who expose establishment propaganda, or “official drivel”, as Gellhorn called it. Mohammed shares the prize of £5,000 with Dahr Jamail. At 24, he is the youngest winner. His citation reads: “Every day, he reports from a war zone, where he is also a prisoner. His homeland, Gaza, is surrounded, starved, attacked, forgotten. He is a profoundly humane witness to one of the great injustices of our time. He is the voice of the voiceless.” The eldest of eight, Mohammed has seen most of his siblings killed or wounded or maimed. An Israeli bulldozer crushed his home while the family were inside, seriously injuring his mother. And yet, says a former Dutch ambassador, Jan Wijenberg, “he is a moderating voice, urging Palestinian youth not to court hatred but seek peace with Israel”.

Getting Mohammed to London to receive his prize was a major diplomatic operation. Israel has perfidious control over Gaza’s borders, and only with a Dutch embassy escort was he allowed out. Last Thursday, on his return journey, he was met at the Allenby Bridge crossing (to Jordan) by a Dutch official, who waited outside the Israeli building, unaware Mohammed had been seized by Shin Bet, Israel’s infamous security organisation. Mohammed was told to turn off his mobile and remove the battery. He asked if he could call his embassy escort and was told forcefully he could not. A man stood over his luggage, picking through his documents. “Where’s the money?” he demanded. Mohammed produced some US dollars. “Where is the English pound you have?”

“I realised,” said Mohammed, “he was after the award stipend for the Martha Gellhorn prize. I told him I didn’t have it with me. ‘You are lying’, he said. I was now surrounded by eight Shin Bet officers, all armed. The man called Avi ordered me to take off my clothes. I had already been through an x-ray machine. I stripped down to my underwear and was told to take off everything. When I refused, Avi put his hand on his gun. I began to cry: ‘Why are you treating me this way? I am a human being.’ He said, ‘This is nothing compared with what you will see now.’ He took his gun out, pressing it to my head and with his full body weight pinning me on my side, he forcibly removed my underwear. He then made me do a concocted sort of dance. Another man, who was laughing, said, ‘Why are you bringing perfumes?’ I replied, ‘They are gifts for the people I love’. He said, ‘Oh, do you have love in your culture?’

“As they ridiculed me, they took delight most in mocking letters I had received from readers in England. I had now been without food and water and the toilet for 12 hours, and having been made to stand, my legs buckled. I vomited and passed out. All I remember is one of them gouging, scraping and clawing with his nails at the tender flesh beneath my eyes. He scooped my head and dug his fingers in near the auditory nerves between my head and eardrum. The pain became sharper as he dug in two fingers at a time. Another man had his combat boot on my neck, pressing into the hard floor. I lay there for over an hour. The room became a menagerie of pain, sound and terror.”

An ambulance was called and told to take Mohammed to a hospital, but only after he had signed a statement indemnifying the Israelis from his suffering in their custody. The Palestinian medic refused, courageously, and said he would contact the Dutch embassy escort. Alarmed, the Israelis let the ambulance go. The Israeli response has been the familiar line that Mohammed was “suspected” of smuggling and “lost his balance” during a “fair” interrogation, Reuters reported yesterday.

Israeli human rights groups have documented the routine torture of Palestinians by Shin Bet agents with “beatings, painful binding, back bending, body stretching and prolonged sleep deprivation”. Amnesty has long reported the widespread use of torture by Israel, whose victims emerge as mere shadows of their former selves. Some never return. Israel is high in an international league table for its murder of journalists, especially Palestinian journalists, who receive barely a fraction of the kind of coverage given to the BBC’s Alan Johnston.

The Dutch government says it is shocked by Mohammed Omer’s treatment. The former ambassador Jan Wijenberg said: “This is by no means an isolated incident, but part of a long-term strategy to demolish Palestinian social, economic and cultural life … I am aware of the possibility that Mohammed Omer might be murdered by Israeli snipers or bomb attack in the near future.”

While Mohammed was receiving his prize in London, the new Israeli ambassador to Britain, Ron Proser, was publicly complaining that many Britons no longer appreciated the uniqueness of Israel’s democracy. Perhaps they do now.

This entry was posted in RagBlog and tagged Israel, Palestine, Torture. Bookmark the permalink.