‘This country is moving very fast toward an oligarchic form of society where a small number of people have incredible wealth and incredible economic power.’ 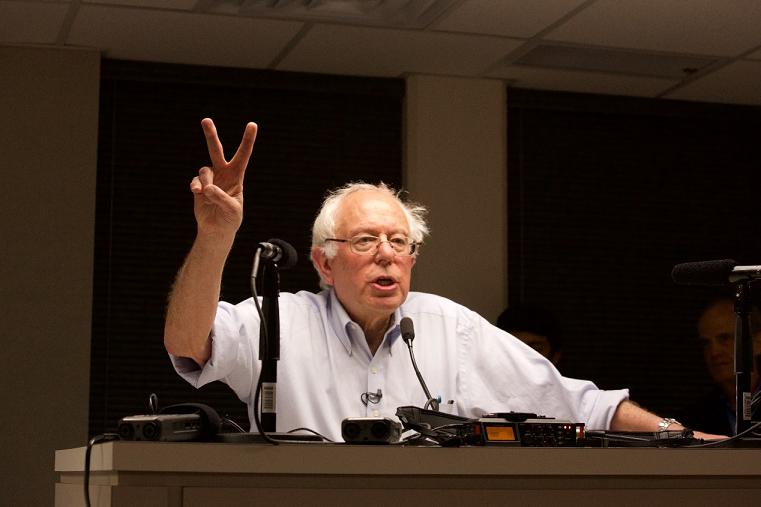 Give peace a chance: Sen. Bernie Sanders speaks to an overflow crowd at an Austin union hall, March 31, 2015. Photo by Alan Pogue / The Rag Blog.

UPDATE: On Thursday, April 30, after weeks of speculation, Sen. Bernie Sanders (D-VT) officially announced his candidacy for president of the United States. Sanders is the first candidate to challenge Hillary Clinton for the Democratic nomination.

Sanders told the Associated Press: “People should not underestimate me. I’ve run outside of the two-party system, defeating Democrats and Republicans, taking on big-money candidates and, you know, I think the message that has resonated in Vermont is a message that can resonate all over this country.”

AUSTIN — This special Rag Radio podcast features an exclusive 30-minute interview with Sen. Bernie Sanders (I-VT), a leading progressive voice in the U.S. Senate who discusses with us his potential presidential candidacy and what he calls the “grotesque level of income and wealth inequality” in this country.

The second part of the show is a discussion with Rag Radio political analyst Glenn W. Smith, a progressive Democratic strategist and director of Progress Texas PAC.

Download the podcast of our March 27, 2015, Rag Radio interviews with U.S. Sen. Bernie Sanders and political analyst Glenn W. Smith here — or listen to the show using this player:

Bernie Sanders joined us by telephone from Washington, D.C., in advance of his recent Austin visit which was highlighted by a March 31 “Bernie Sanders Town Meeting” that was by all accounts a rousing success.

The senator spoke before an enthusiastic gathering of close to 500 political activists, union members, and Bernie supporters who were packed into the union hall of the International Brotherhood of Electrical Workers (IBEW) Local 520 on E. Ben White Blvd. in Austin. The event was chiefly organized by the increasingly active Austin chapter of the Democratic Socialists of America (DSA). 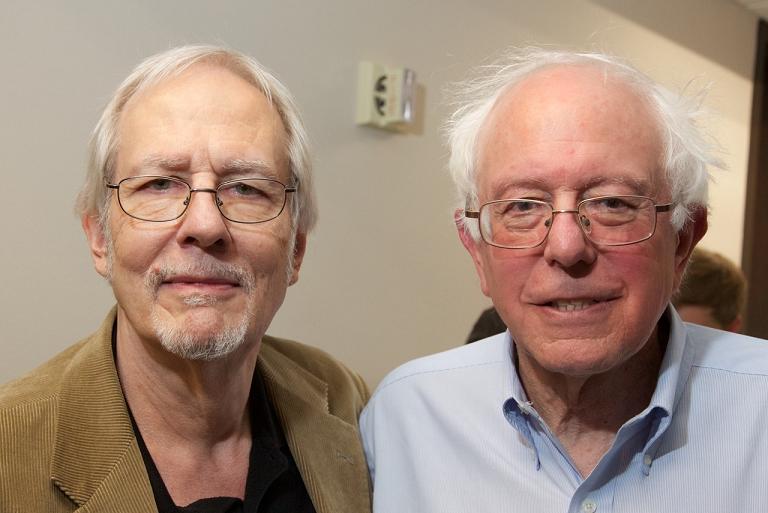 On the radio show, Sanders saluted pundit Hightower: “Jim is an old friend of mine and you should be very proud to have him as your local agitator in Austin,” he said. In a recent appearance on Rag Radio, Jim Hightower addressed many of the same themes that Sanders stresses, especially the need for a grassroots movement to counter what Hightower refers to as a “corporate plutocracy.”

Bernie also gave a shout-out to Rag Radio: “Congratulations for having a cooperative radio show that talks about real issues that effect real people,” he said. “We need to multiply what you do by a million times.”

Sanders, who was elected to the Senate in 2006 after 16 years serving Vermont as its sole congressman, is the longest serving independent in American Congressional history. He is known for his outspoken advocacy on issues such as income inequality, big money in politics, climate change, and veterans’ interests.

A native of Brooklyn who worked as a carpenter and a documentary filmmaker, Bernie is the former mayor of his hometown, Burlington, Vermont. He is a member of the Senate Committee on Veterans’ Affairs, which he previously chaired, and in 2015, was tapped to serve as the ranking Democrat on the Senate Budget Committee. Bernie is one of only two Independents in the Senate and is the only member of Congress who openly identifies as socialist.

‘In this country today we probably have more serious problems than we have had
since the great depression.’

“In this country today we probably have more serious problems than we have had since the great depression,” Sen. Sanders told the Rag Radio listeners.

Between 2013 and 2015, a two-year period, the wealthiest 14 people in this country — Bill Gates and Warren Buffett and the Koch Brothers — saw an increase in their wealth of $157 billion. That is more money than the bottom 40% of the American people have.

You’ve got our friends the Koch Brothers, who are the second wealthiest family in the country, prepared to spend more money than either the Democratic or Republican parties in the next election to push forward an extreme right-wing agenda which represents the very most wealthy people in this country.

‘The challenge is to bring people together around a progressive agenda.’

About his potential run for the presidency, Bernie Sanders said:

What I have to weigh is whether I could put together — in terms of fundraising, in terms of a grassroots political infrastructure –- the kind of support that we need to run a serious and winning campaign…

What does make me optimistic is that, on issue after issue… the American people are not as divided as the pundits tell us that we are.

People want to raise the minimum wage, they want to create jobs, they want to deal with climate change, they want to make college affordable, they are outraged by the greed of the top 1% and the grotesque level of wealth and income inequality.

The challenge, and it’s not an easy challenge, is to bring people together around that progressive agenda. 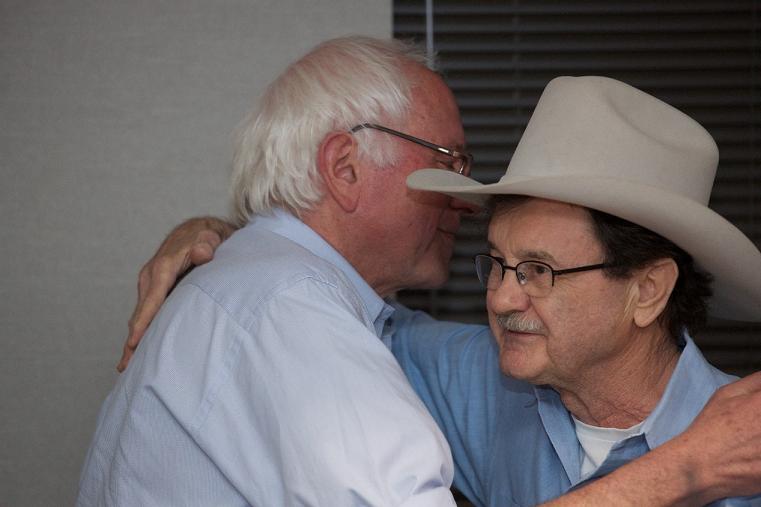 ‘Their goal is to make a counterrevolution in America and move us back to the 1920s.’

“This country,” Sen. Sanders believes,  “is moving very fast toward an oligarchic form of society where a small number of people have incredible wealth, incredible economic power.”

You have on Wall Street six financial institutions that have assets that are over 60% of the GDP of the United States of America. They issue two-thirds of the credit cards and one-half of the mortgages in America.

Their goal is to make a counterrevolution in America and move us back to the 1920s.

And what their agenda is about is literally to repeal every piece of progressive legislation passed in the last 80 years: social security, Medicare, Medicaid, education, do away with the concept of the minimum wage. They are funding the climate deniers.

So, he asks rhetorically, “do we need to redistribute [wealth] back to the working families of this country, many of whom might have $2,000 in the bank? And many… who could go under if they had an automobile accident or a divorce or serious illness?”

About the current gang at the Supreme Court, Sanders says:

In area after area this Supreme Court has been a disaster, has undermined democracy, has been working day and night for the wealthiest and most powerful people in this country.

I think the Citizens United decision alone will probably go down as one of the worst decisions ever made by a Supreme Court. It essentially tells the billionaires, hey, you won much of the economy, now you can own the United States government.

And they are seizing that opportunity.

“That is not the kind of country I think that most Americans want to live in,” Sanders concludes. “And that’s the struggle that we face right now.” 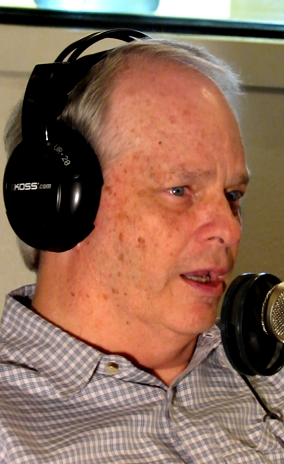 Joining us for the second segment of our show is prominent Texas political consultant and strategist Glenn W. Smith. We discuss the current political scene — both nationally and in Texas — including the assumed “inevitability” of Hillary Clinton (“Barring unforeseen circumstances, I think she will be the nominee.”) and what Smith dubs the “mean demeanor” of Texas Sen. Ted Cruz, whom he refers to as a “bully authoritarian.” “He’s no Penelope,” Glenn chuckled.

Smith has recently joined forces with the Rev. Dr. William Barber, whose “Moral Monday” movement in North Carolina has been such a remarkable success in its grassroots efforts that have pulled together people of all races, genders, ages, and class backgrounds. Rev. Barber, Smith says, “is a powerful speaker with a moral vision that I haven’t run across anywhere else in the country, and the ability to put it into action and get people to work together.”

Moral Monday is now being organized
on a national scale.

Moral Monday is now being organized on a national scale as the “Forward Together Moral Movement.” Smith believes that Barber has the makings of a great civil rights leader and that the movement has the potential to become an important force nationally.

Glenn, who is director of the influential Progress Texas PAC, is Rag Radio’s resident political analyst. A former political journalist, Smith helped manage Ann Richards’ winning 1990 campaign for governor of Texas. He’s guided national campaigns for MoveOn.org, has been a senior fellow at George Lakoff’s Berkeley think tank on moral, progressive political language, and is the author of the acclaimed Politics of Deceit, a book which calls for a revolution in our political practices.

In addition to listening to the podcast of our show with Sen. Bernie Sanders and Glenn Smith, you can see Jeff Zavala and Grace Alfar’s YouTube video featuring highlights of Bernie Sanders’ Austin Town Hall appearance and listen to Sanders’ speech, recorded by Allen Campbell for KOOP Radio’s People United, .

Rag Radio is a weekly hour-long syndicated radio program produced and hosted by Rag Blog editor Thorne Dreyer, that has aired more than 250 shows since September 2009. The show is produced in the studios of KOOP 91.7-FM, a cooperatively-run all-volunteer community radio station in Austin, Texas, and is first broadcast and streamed live on KOOP every Friday from 2-3 p.m. (CDT).

Tracey Schulz is the show’s engineer and co-producer, Roger Baker is our still photographer, and Jesse Spratt is our Rag Radio apprentice.