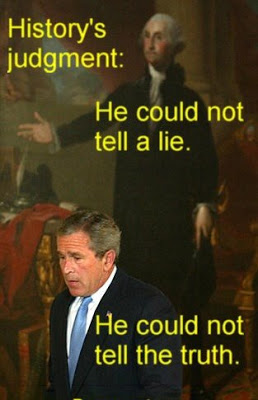 Shame on them (the politicians) and shame on us (the public). We live in the United States of Shame. Why? Because everywhere we see nothing but disgrace, dishonor and infamy, yet a complete absence of shame. In a nation where religion supposedly plays such a big role, people seem to have used it to suppress shame and avoid blame.

Republicans should feel nothing but shame over the worst presidency in American history. Democrats should feel utter shame for a Congress that has sold out ordinary citizens. Lesser evil voters should feel heart-attack pain for their shameful behavior in maintaining the status quo two-party plutocracy. All those millionaires and billionaires that made it big in corporate America should have SHAME tattooed on their foreheads.

I have been thinking about shame as I reflect on how our nation has sunk so low and how little confidence I have that any Democrat or Republican – not Barack Obama or John McCain – will truly reform a totally corrupt and dysfunctional political system. I keep waiting to hear either of these two or any of the so-called leaders in Congress say something as simple as “As an American and an elected public official I feel nothing but shame for being part of this awful political system that has let you down.”

When those with power feel no shame over their incompetence and ineptitude they clearly have no ability to own up to it. Without the expression of shame there is no genuine apology.

I do not want to keep seeing a grinning John McCain and a smiling Barack Obama. I want to see them and Nancy Pelosi and Harry Reid and all the other losers in Congress plea publicly for forgiveness from the nation they have shamed. This is what we all should demand of them. Say this clearly; say it every freaking day every time you get in front of a microphone and camera: “I am ashamed to be part of this system. Forgive me. I will set aside all my ambitions and excuses and try to earn your forgiveness.” Write it 1,000 times every damn day. Make it your mantra. Say it every time you shake the hand of an American.

When you automatically say yet another lie to the public stop yourself, pause and say “Forgive me, bad habits are so hard to break. What I just said is really a lie. I am ashamed. Here is the truth…”

Until all those with power in the public and private sectors totally recognize, accept and proclaim their shame there is no hope for returning our nation to greatness.

Until ordinary people also accept their shame for their cowardly behavior in supporting our shameful two-party plutocracy that has given us nothing but a fake democracy, there is no way that we will vote our way out of this awful mess.

1 Response to To Begin Healing the Nation, Accept Responsibility