Tom Hayden :
There may be an alternative to Obama’s pro-corporate trade deal

It seems unlikely, but should Obama decide to extricate himself from an inconvenient initiative, here’s a way out. 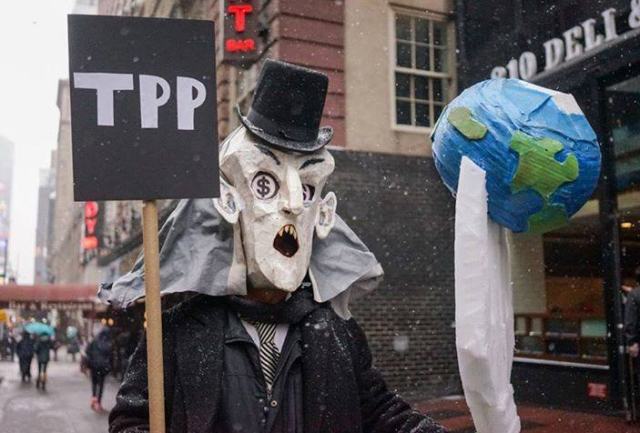 The Trans-Pacific and Trans-Atlantic trade agreements (TPP and TTIP) are being negotiated in secrecy, presumably because they include elements of a corporate agenda that would be rejected if ever debated in public, according to the expert opinion of Lori Wallach of Public Citizen’s Global Trade Watch.

One part of Obama’s agenda is to promote export industries by breaking down labor, environmental, and nationalist opposition to the spread of market-friendly trade rules. Democracy and sovereignty are seen as obstacles that must be weakened in the pursuit of an overarching liberalization of markets.

A decisive factor for the proposed Pacific trade agreement is Obama’s strategic response to the expansion of China’s power.

These notions have been discredited significantly since the 1999 “Battle of Seattle” and the past decade of middle-class slump. That suggests that a decisive factor for the proposed Pacific trade agreement is Obama’s strategic response to the expansion of China’s power. But that objective is also in trouble, undermined by China’s new multibillion-dollar Asian Infrastructure Bank which has 46 founding members, including America’s closest allies — the UK, France, Germany, Australia, and South Korea — over U.S. objections.

The New York Times quoted one Chinese finance official as saying, “Washington basically undermined itself by failing to allow a bigger voice for China in the World Bank and International Monetary Fund” (April 3). The U.S. can’t compete with China over funds for road, railroad, and pipeline projects which China calls “the new Silk Road” between their country and Europe.

The European trade pact being negotiated by Obama’s team with European states also aligns him with the pro-austerity agenda embraced by his Republican foes at home. If he accuses Republicans of budget cuts that cause economic stagnation and leave millions at the mercy of the market, how can he endorse those policies abroad?

What do Obama and the Democrats achieve from these policies?

What do Obama and the Democrats achieve from these policies? Campaign dollars? At what price in lost political support and mounting public confusion? What will Hillary Clinton do? Undermine her month-old populist campaign by supporting a trade deal that is bad for labor and “everyday Americans”? Remind them that her husband Bill brought NAFTA to working families? Or yield to the demand of Ohio Sen. Sherrod Brown, representing a crucial swing state, that she oppose the current deal?

It seems unlikely, but Obama may wish to extricate himself from an inconvenient initiative, which is being trumped by China while it antagonizes his closest political allies. Perhaps Obama is caught in the passé politics of the Clinton era while trying to transition to a newer, more populist era with its emphasis on gross economic inequality.

If so, there’s a possible way out. Building on the growing living wage movement at home, Obama might assert that the proposed trade deals hinge on acceptance of a global living wage. He might demand the end of fiery sweatshops, slave labor, and workplace abuse of women and children. 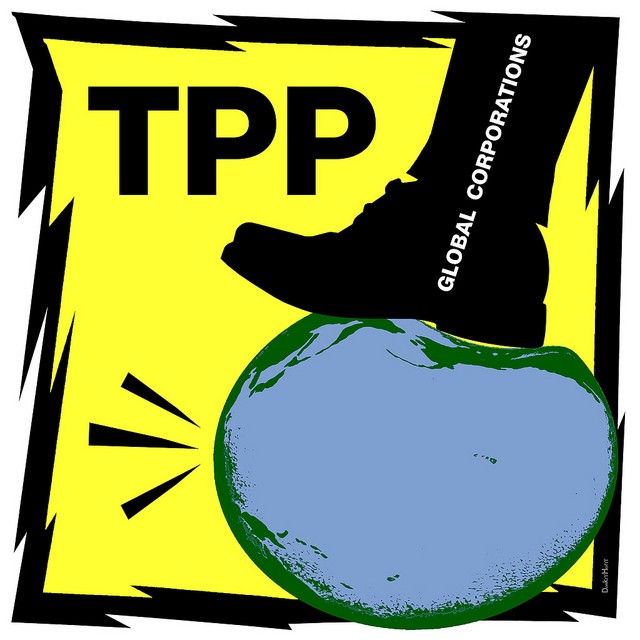 He might call for a new compact, one which Newsweek called a ‘Global New Deal.’

He might call for a new compact, one which Newsweek called a “Global New Deal” a few years ago. He might call it an answer to austerity. It would be immensely popular and consistent with his new diplomatic initiatives abroad. If he wants to take on China and Big Business, he can call out the sweatshops where virtual slave labor makes our iPhones and iPads for Silicon Valley firms.

Detailed blueprints for implementing a global living wage of ending sweatshops have been around for years. No one among the Western powers has been willing to challenge the neoliberal model. Brazil comes closest among the developing countries with its policies of a free education and a guarantee of raising all incomes over the poverty line (Brasil Sem Miseria or Brazil without destitution.)

Such an initiative would also buttress the president’s crucial climate policy objectives in advance of the United Nations talks this December. The crucial issues in those intensifying talks are between the haves and have-nots, in which the former are the most responsible for carbon pollution and the latter are most battered by climate change and lacking in resources to mitigate the damage and finance a transition.

the key is accepting a policy of ‘common but differentiated responsibilities’ among the rich and poor nations.

In UN-speak, the key to a viable agreement is accepting a policy of “common but differentiated responsibilities” (CBDR) among the rich and poor nations. That language appears in the UN Framework Convention (1992) and the Kyoto Protocol (1997) that obliges the wealthy powers to assist developing countries technologically and financially. The recent Lima Summit affirmed this approach, but only after infighting that lasted 32 hours after the meeting was planned to end.

Since only 15 countries generate most global emissions, there can be no UN agreement to slash greenhouse gas emissions without an equitable sharing of the burden. Here too China is a major factor. The U.S. and China cause 40 percent of carbon emissions and have been taking tentative steps towards a global agreement in Paris. As Obama is imposing severe restrictions on coal-powered plants in the U.S., he could call on China to do more to reduce the lethal pollution in China’s cities. (California air pollution experts already are collaborating with their Chinese counterparts.)

Although China is beginning to take responsibility for its emissions, Obama still could constructively criticize China for violating workers’ rights and causing an air pollution health crisis. Those are fair arguments in the context of peaceful competition. Surely such improved policies — a Global Living Wage and Climate Justice — would be far saner than perpetuating global sweatshops and a New Cold War.