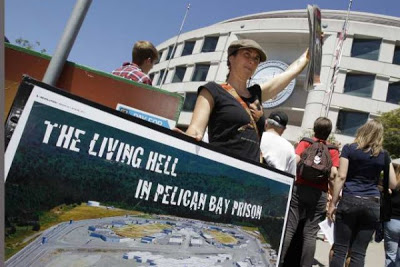 The shame of California:

This strike has drawn worldwide attention to the widespread use of torturous practices by the United States against its own citizens.

BIG LAGOON, California — I’ve been eating well this summer, enjoying the local fruits and vegetables of Northwest California, while 60 miles away a group of men risked their health by refusing to eat for three weeks.

I’m in Big Lagoon, surrounded by ocean, lagoon, and forest in an area of coastal California described by National Geographic as among the top 20 “unspoiled” tourist destinations in the world. An hour’s drive north of here is Pelican Bay State Prison, a state-of-the-art hellhole that was recently the center of a three-week hunger strike led by prisoners in the Secure Housing Units (SHU).

Pelican Bay was California’s first supermax prison, built in 1989 on 275 acres of clear-cut forest near Crescent City. With an annual budget of $180 million, it has a payroll of more than 1,600 guards and service workers.

The prison was built for 2,280 prisoners, but its current census is close to 3,500, almost half of whom are housed in a prison within the prison, the SHU, an X-shaped cluster of brutalist concrete buildings, surrounded by guard towers, electronic fencing, and barren ground.

Here, more than a thousand men, whose families live hundreds of miles away, are imprisoned 23 hours a day in 8 x 10 foot, windowless, constantly lit cells, subject to sensory deprivation and social isolation, sometimes for years.

The hunger strike at Pelican Bay, which lasted from July 1st to July 22nd, was led by long-term prisoners in the SHU. It is estimated that on any given day in the United States, at least 25,000 prisoners are held in isolation, and perhaps as many as another 80,000 are kept in segregation units, typically in isolation. Writing in The New Yorker (“Hellhole,” 30 March 2009), Atul Gawande calls this practice “legalized torture,” resulting in long-term physical and mental damage to many of its victims.

Pelican Bay, like many of California’s prisons, was built on formerly agricultural land in a region seeking to resuscitate its depressed economy. The hardscrabble Crescent City, briefly a boomtown during the Gold Rush and once a beneficiary of the lumber and commercial fishing industries, has one of the state’s highest unemployment rates and among the most stingy public services.

When the state borrowed from public funds to build the high security prison at a cost of $277.5 million to taxpayers, it was supposed to boost the local economy. But the benefits primarily went to local landowners, and construction and utility companies; to national chains like K-Mart, Ace Hardware, and Safeway; and to the politically powerful guards’ union. Meanwhile, the county’s unemployment rate is almost 14 percent and one out of three people live in hand-to-mouth poverty. 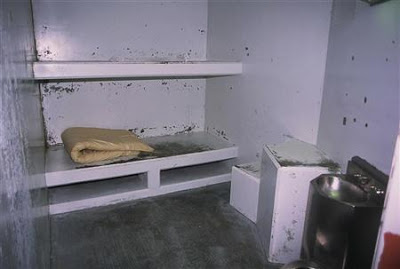 The city’s misery is compounded by its record rainfall and susceptibility to tsunamis. Unless work or family requires you to stay in Crescent City, this is a place to drive through on the way to somewhere else. No wonder that prisoners comprise about 46 percent of the city’s 7,600 population. Small towns that hoped for a bonanza by inviting prison construction, says Ruth Gilmore in Golden Gulag, are victims of a boondoggle.

California may lag behind many other states in high school graduation rates, welfare benefits, and investment in public health, but when it comes to punishment, we rank at or near the top. Between 1852 and 1964, California built only 12 prisons. Since 1984, the state has erected 43 penal institutions, making it a global leader in prison construction. Today, 90 penitentiaries, small prisons, and minimum-security camps stretch across 900 miles of the fifth largest economy in the world.

In 1982, the prison system cost taxpayers 2 percent of the General Fund; by 2006, it cost almost 8 percent. In 2008, more than one out of six state workers in California was employed by the Department of Corrections, almost three times as many as were employed in Health and Human Services.

In the last decade, “corrections” (with 61,000 employees) has increased its share of state workers, passing the state university system (46,000), second only to the University of California (86,000). Meanwhile, prison suicide and recidivism rates approach twice the national average. And we have one of the most extravagant penal systems in the country, costing taxpayers about the same as the state spends on higher education.

Most of the new prisons have been built in out-of-the way rural areas, like Crescent City, making it easier to lose sight of the humanity of the people we warehouse: mostly men (93 percent), mostly Latinos and African Americans (two-thirds), mostly from big cities (60 percent from Los Angeles), and mostly unemployed or the working poor, victimized by drastic changes in California’s economy over the last 20 years. The prison system is the shame of California, testimony to the persistence of institutionalized racism, the widening economic divide, and the gutting of social programs. 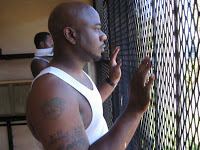 Prisons function as an unemployment program comparable to early capitalist workhouses, except they’ve become warehouses for unused labor rather than sites of production. When prisoners return to their communities, observes Gilmore, the cycle is repeated: they are locked out of “education, employment, housing, and many other stabilizing institutions of everyday life. In such inhospitable places, everybody isolates.”

On July 1st, a small group of prisoners in Pelican Bay’s SHU, calling themselves the Short Corridor Collective, initiated a hunger strike, calling for the abolition of long-term solitary confinement, improvement in programs for SHU prisoners, and an end to various abusive administrative procedures.

Unlike a similar action by prisoners in 2002, this strike drew the support of thousands of prisoners throughout the state. Moreover, Prison Hunger Strike Solidarity was so successful in getting out information about the strike that European human rights organizations urged the Governor to respond to prisoners’ demands and The New York Times carried an Op Ed condemning the “bestial treatment” of prisoners in Pelican Bay State Prison (Colin Dayan, “Barbarous Confinement,” 17 July 2011).

During the strike, according to the Short Corridor Collective, at least 17 strikers, including three leaders, were transferred to another prison for medical treatment. The Collective ended the action on July 22nd after gaining the right to wear cold weather caps, to have calendars in their cells, and to have access to educational programs in the SHU.

Though these concessions by prison authorities are modest, we should not underestimate the larger significance of the strike. It draws worldwide attention to the widespread use of torturous practices by the United States against its own citizens; it forces the government of California to sit down, face-to-face, and negotiate with people who have been demonized as semi-human beasts; and it raises the possibility of once again incorporating prisoners into a larger struggle for social justice.

The civil rights movement in the 1960s and 1970s regarded prisoners as an important constituency, forging intimate ties between community and prison. It fought for massive decarceration, abolition of capital punishment, and ending the racial double standard of arrest and incarceration.

It will take a similar movement today to expose the tragedy of American injustice and make prisoners human again. Thanks to the Short Corridor Collective and thousands of activist prisoners, we now have an opportunity to renew the struggle.

For more information about the strike at Pelican Bay and its consequences, go to Prisoner Hunger Strike Solidarity.

[Tony Platt is the author of 10 books and 150 essays and articles dealing with issues of race, inequality, and social justice in American history. He has written for the Los Angeles Times, San Francisco Chronicle, Truthdig, History News Network, Z Magazine, Monthly Review, and the Guardian. Platt, now an emeritus professor living in Berkeley, California, taught at the University of Chicago, University of California (Berkeley), and California State University (Sacramento). This article was also posted to his blog, GoodToGo.]