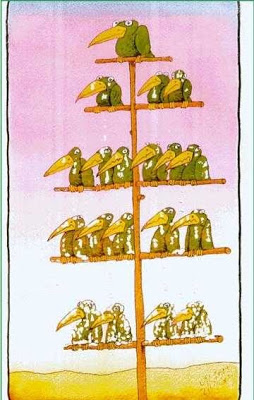 The “trickle down” theory: how it works.
How NOT to create jobs:
Cut business taxes and lower wages?


Money does not trickle down in a capitalist economy — it flows upward, and that has always been true.

For years now, the corporate-owned Republicans have been telling us that the way to create more jobs in America is to cut business and corporate taxes and lower wages for workers. They would like to do away with the minimum wage completely, which would put downward pressure on all wages (except for corporate executives).

Even President Obama has recently jumped on this dubious bandwagon by recommending business tax cuts as a part of his jobs creation program. On the surface, this sounds like it might work. After all, if business owners got to keep more money from reduced taxes, they would be able to afford to hire more workers — right?

The real question is whether a businessman being able to afford more workers would actually translate into that businessman hiring more workers. I submit it would not. Answer this question — is a person in business to create new jobs or to make as much profit as possible?

Any sentient being knows the answer to that question. Nobody goes into business to create jobs. Most business owners work very hard, and they do it to make as much profit as possible so they can make life better for themselves and their families (and there’s nothing wrong with that as long as it’s done legally).

So what would happen to the extra money a business owner would get to keep from lower taxes or lower wages? Unless he/she chose to donate it to some charity (and a few might), it would go in the owner’s bank account to maximize profits (and the same thing would happen in a corporation). This is understandable, but it does nothing to create new jobs.

There are a couple of ways to cut taxes and stimulate job growth, but they are cumbersome and expensive and nobody is proposing them. One way would be to legally tie a business tax cut to the creation of new jobs at that business ($X in cuts=X number of new jobs). The problem with this approach is that the tax cut would have to equal or exceed the actual salaries of the new jobs in order to create more than a miniscule amount of jobs.

That would be a very expensive solution. It would probably be cheaper for the government to hire workers directly for a depression/recession program like Roosevelt’s CCC or WPA.

So if a business tax cut will not work, what kind of tax cut will work? A consumer tax cut like lowering sales taxes or income taxes (for those making less than $100,000).

Republicans want us to think the American economy works in a “trickle down” manner. In other words, if you give the rich businesses enough money some of it will trickle down to workers. That is total nonsense. The economy has never worked that way. Money does not trickle down in a capitalist economy — it flows upward, and that has always been true.

Just look at our history. The best times for our economy were when consumers had money to spend. Take the 1950’s for example. Consumers had it good because it was a time of educational achievement (thanks to the GI Bill) and union expansion. This gave consumers more money to spend, and because of that businesses (both large and small) thrived as that money flowed upward.

There is only one reason for a business owner to hire more workers (create jobs), and that is because he/she needs more workers to handle an increase in demand for that business’s goods or services. That increased demand can only happen when consumers have money to spend.

This same argument is true whether we are talking about tax cuts or lower wages. Lower wages would let the business owner keep more of his money, but it would also shrink the amount of money consumers have to spend. And in the long run, that would hurt both workers and businesses. Instead of costing jobs (as Republicans want us to believe), higher wages actually create jobs as businesses must hire workers to handle increasing demand created by the higher wages.

Cutting business taxes and/or lowering wages is only a short-term solution for a long-term problem. This recession has cost America over 7 million jobs, and this economy will not really start moving again until we recover most or all of those jobs. The only way to do that is to aim the recovery money at workers and consumers — not at businesses.

Cutting business taxes and/or lowering wages will give businesses a little short-term profit, but will not create jobs or help the economy. Cutting taxes for consumers and directing recovery money at workers will not only create jobs and put our economy back on track, it will help business even more in the long-term. It is the only solution.

(A tip of my hat goes to Badtux the Snarky Penguin for his humorous and very astute take on this situation.)