US Congress: Accused of War Crimes 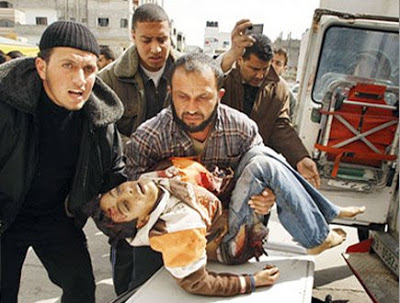 I accuse you, the US Congress, of having voted for US House Resolution 34 by an overwhelming margin, 390-5. In the name of protecting Israel’s security, this Resolution instead protects Israel’s “right” to hold a whole population accountable for the violations of a few. By condoning Israel’s behavior over the past two weeks as self-defense, HR 34 condemns one and a half million Gazans to capital punishment without trial for crimes they have not committed. By publicly acknowledging and approving Israel’s behavior, you now share responsibility for the outcomes.

I accuse you of violating the laws made by the Congress of the United States, laws like the Arms Export Control Act of 1976, which insist that American-made weapons may not be used against civilian populations.

I accuse you of supporting flagrant violations of human rights. The combatants you voted to support are required by international law to care for civilian victims of war. Yet the Israeli government denied the International Committee of the Red Cross access to the sites they bombed for four days. The nightmares that resulted are too horrific to be imagined. Perhaps you could contemplate what the ICRC found when it was finally allowed to provide relief for the victims of Israeli bombing: four children, so starved that they could not stand up, huddled by their dead mothers. Food and water have become hard to find, and medicine is vanishing as the need for medical care explodes as more and more missiles land in Gaza. Israel has, nonetheless, targeted not only a UN school, but also a UN convoy bringing desperately needed supplies. The result, according to the ICRC’s director of operations, is catastrophic. “There is no doubt in my mind,” he stated, “that we are dealing with a full blown and major crisis in humanitarian terms. The situation for the people in Gaza is extreme and traumatic as a result of ten days of uninterrupted fighting. In that sense, their situation has clearly become intolerable.”

I accuse you of transgressing international law. The United States, as one of the High Contracting Parties to the Fourth Geneva Convention, is required to protect civilians in war, and to call to account anyone who targets them. You have instead voted to support behavior considered criminal according to international law.

I accuse you of making our ally, Israel, less secure than ever before, as the orphans of today seek vengeance in the future. Instead of seeking a real peace, a peace of mutual security and prosperity, you have chosen to support only one side in this ongoing struggle, condemning the others to enormous suffering.

I accuse you of putting politics before humanity, of condoning the slaughter of innocents, of supporting war crimes instead of standing up for the most basic human right: the right to live without the terrifying fear of immediate death.

I hold you responsible, each of these 390 members of America’s 111th Congress. I accuse you of complicity in the most serious transgressions that humans can commit.