Victor Agosto : The Price of Conscience 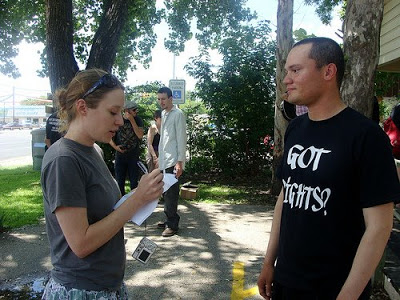 GI Victor Agosto, being interviewed by Beth Freed of the Dallas Peace Times, after announcing that he was refusing deployment to Afghanistan. Photo from Under the Hood Cafe.
GI Victor Agosto

That is the price of conscience. When he said: ‘There is no way I will deploy to Afghanistan,’ the trajectory of his life shifted.

Today, June 19th, is the day that Victor Agosto was to be released from the Army. He would have left the service with one tour in Iraq, a good record, and full benefits.

But for Stop Loss.

His release date was moved when he received orders to deploy to Afghanistan. Because he is resisting those deployment orders, Victor now faces a very different future which may involve a special court martial, a maximum sentence of a year, and the potential of no service related benefits.

That is the price of conscience. When he said: “There is no way I will deploy to Afghanistan,” the trajectory of his life shifted.

Victor is 24. From my perspective, that is young. When I was his age, I did some things that demanded courage — sit-ins to integrate restaurants or protest the draft. Some of those acts of courage came with the price of a night in jail. But, I wasn’t in the military. I wasn’t up against a military system that dictates that a contract clause called Stop Loss trumps conscience.

Please think of Victor today and, if you can, contribute to his defense fund and sign the petition supporting him.

12 Responses to Victor Agosto : The Price of Conscience