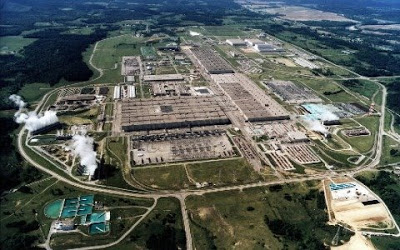 Job-starved southern Ohioans are being promised a shiny new nuclear plant. But the announcement has come with a cruel reminder, and the scent of a desperate hoax.

Using the gargantuan corpse of the shuttered Portsmouth-Piketon uranium enrichment plant as his backdrop, U.S. Senator George Voinovich (R-OH) punctuated his enthusiastic endorsement the new nuke by proclaiming that, with his support, the US government has paid thousands of Ohio workers hundreds of millions of dollars in compensation for the health damage they suffered from being irradiated while working there.

What was he thinking?

Just north of the Ohio River, Portsmouth-Piketon was a mainstay of the nuclear power/weapons complex dating back to 1954 (it shut in 2001). Generations of workers and their progeny suffered a devastating plague of radiation-related diseases from the facility’s radioactive fallout, inside and around the plant boundaries. It took decades of brutal, grinding grassroots campaigning to win even a modicum of compensation.

Now the heaviest of nuclear hitters want to use this same site for a 1600-megawatt French-designed plant that would anchor a “Clean Energy Park.” In a region devastated by the enrichment plant’s shutdown, and by the decimation of the American industrial economy, it would be a flagship for the “nuclear power renaissance.”

It is a cruel hoax.

Voinovich was joined by Ohio Governor Ted Strickland and a bevvy of heavy industry hitters that included Jim Rogers, head of Duke Energy, and representatives of Unistar, the United States Enrichment Corporation, Electricite de France and hundreds of plant workers who surrounded a tuxedoed band and the kind of high-profile reception that bespeaks an excess of corporate cash.

But the most critical spot was occupied by Anne Lauvergeon, CEO of AREVA, the French government’s nuclear front group. She ended her brief speech with a heavily inflected “Go Buckeyes!”

Lauvergeon is a top A-List industry hitter, the flamboyant, hard-nosed chief of the world’s number one reactor pusher. But AREVA’s finances have been hard-hit by an outdated technology teetering at the brink of collapse, even as its supporters push ahead with high-profile—but hollow—events like this one.

After her talk, Lauvergeon continually referred me to her website regarding AREVA’s catastrophic failures at its first “new generation” reactor project in Finland. It will be finished in 2012, she said, years after originally planned. It will be billions of Euros over budget. The problem, she complained, was that Finnish regulators demanded to see “so much documentation… Hundreds of thousands of pages.”

There were no such problems in France, she said, where AREVA’s Flamanville project is, nonetheless, also over budget and behind schedule. Nor, apparently, in China, where two reactor orders are on shaky ground because of worries excited by the problems in Finland.

Lauvergeon could not speak to the radioactive waste problem in the US, she said, because “that is a government matter.” Elsewhere, “utilities have control of their wastes.” In Finland they “will be disposed of right next to the reactor.” Elsewhere, “recycling” reduces the wastes to “a fraction of their original volume.”

Laugergeon’s glib assessments are cruelly misleading. Radioactive fuel reprocessing is prohibitively expensive, extremely dirty and technologically suspect, at best. France’s high-level waste problem is as unsolved as that of the US, where the Yucca Mountain Dump has been cancelled, putting the industry back where it was fifty years ago.

The proposed Ohio project, which has received saturation media coverage throughout the US, is years away from getting any kind of license. The Nuclear Regulatory Commission has never turned down an applicant. But the line for new permits is long and twisted. Changes are still being made to the designs. The French entry has never been fully examined by the NRC, which must sift through thousands of pages of documents before issuing the inevitable permit, a process that nonetheless will take years.

Other bothersome details remain to be solved, most importantly: who will actually pay for all this? Voinovich pledged his strongest efforts to provide federal funding. But resistance to such handouts continues to be firm. Wall Street has displayed little interest in funding new reactors. There is talk the French would finance it themselves, but the fiasco in Finland and the pressures of a declining European economy have cast doubt on that.

Nor has the insurance industry come forward to provide liability coverage in case of a major accident. New design criteria may require containment domes designed to resist a jet crash. But the cost requirements to do that may add to the already prohibitive financial burden.

Indeed, beneath all the hoopla lurk hints that the final deals between the various partners may actually not have been completed. The announcement ceremony was long on hype but short on contractual specifics.

Among other problems might be: where will the water come from to cool this plant? Reactors in France, Alabama and elsewhere have been forced shut because waste water has caused overheating of streams—up to 90 degrees Farenheit and higher.

Early polls indicate area residents appear to support the project for its jobs potential. But the residual wounds from the radiation diseases and deaths caused by the enrichment plant run deep. The local resistance may be small, but it is fierce.

Nor is the plant’s timetable secure. With years needed to get a license, and untold years more needed to build it, there is no way this proposed reactor could generate any electricity until well into the 2020s. Even if nuclear power could help—which it can’t—solutions to climate change, to which the speakers continually referred, must come far sooner.

By then, the high cost of atomic energy will be even more prohibitive than now. A definitive study of reactor economics released as the Ohio promoters spoke could adorn the tombstone of the entire “renaissance.” Authored by Prof. Mark Cooper of the Vermont Law School, “The Economics of Nuclear Power: Renaissance or Relapse?” says it would cost from $1.9 trillion to $4.1 trillion more to generate power with 100 new nuclear plants than from a comparable combination of renewables and efficiency.

In a conference call, Cooper emphasized “a striking parallel” between today’s “new generation” projections and those that led to the devastating cost overruns and delays that doomed the first generation of US reactors. Lauvergneon’s AREVA experiences in Finland and Flamanville seem to underscore that parallel.

In the 1980s, Ohio also suffered a “Peaceful Atom” fiasco. The infamous Zimmer Reactor, built by a consortium of southern Ohio utilities, was virtually finished before a cascade of scandal wiped away its credibility. Constructed at Moscow, on the Ohio River not far from Portsmouth, Zimmer was plagued by thousands of construction defects. Finally, in face-saving desperation, it was converted to a coal burner, at a cost of hundreds of millions of taxpayer and ratepayer dollars.

Given that experience, and all those questions and more surrounding new reactor construction in general, there’s a sense of mystery surrounding this very forced high profile announcement in southern Ohio. Perhaps it was prompted by the fact — sorrowfully announced at the beginning of this speech—that Sen. Voinovich will be retiring next year. This project’s backers may have thought it prudent jump in now, while their chief advocate might still wrest money from Congress for a project that will otherwise have a hard time finding it.

Whatever the reason, the announcement reeks of desperation. Duke Power, for example, has recently signed an efficiency deal that will save large quantities of electricity at far less cost than even the most optimistic nuclear boosters say reactors can produce it.

The true green reality is that in today’s world, new power projects have far more credibility when announced before a backdrop of operating windmills or solar panels, rather than the seething corpse of a Cold War uranium facility.