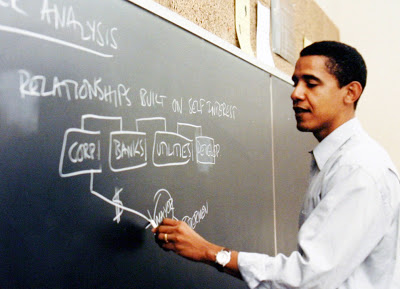 With his list of 90 accomplishments, Dr. Robert P. Watson of Lynn University in Boca Raton, Florida, has graded Barack Obama on his first six months in office.

I think the list is invaluable even though, as a progressive, I don’t believe things are quite as rosy as Dr. Watson’s inventory might suggest.

For instance, I have been extremely disappointed with the president on health care reform and was completely shocked when he took single payer out of the mix from the very beginning. Even I, an unseasoned political person, did not (and do not) trust health insurance, big pharma, and AMA to make our costs less expensive.

I wholeheartedly agree that defending Obama on effectively false grounds will help neither him nor us. But I believe the list can be helpful, as a starting point for analyzing his presidency so far.

He has certainly disappointed us in a number of areas, but I do think it important that we acknowledge his positive actions. Let’s add to the list as more accomplishments come to light. And if we think certain items are misleading, we can make note of them. We’ll send him The Rag Blog with our additions.

I am saving the list in a file and using appropriate parts for different blogs. For example, in the Lubbock paper there was recently a comment about President Obama not being deserving to be Commander-in-Chief of the military. I went through the list and picked out all of the items that pertained to what he has done for our soldiers and their families and posted them in the comment space. Some of these items I was already aware of, some I was not.

Although I knew that the president had lifted the veil of secrecy (with appropriate family permission) over the returning war dead that had been established by both H. W. Bush and G. W. Bush, I was not aware that the expenses for families of the fallen soldiers are now covered so that they could be at Dover A.F.B. when their loved ones came home (#5). I am also grateful that he is phasing out the “back-door draft” caused by the stop-loss policy that kept soldiers in Iraq-Afghanistan longer than their tours of service (#12).

I believe that numbers 1, 2, and 9 were instrumental in exposing the Medicare fraud recently publicized in Florida. Even though I was aware of the rules limiting lobbyists in the White House (#10, 11), I am glad to be reminded and to have them in a list that I can go to for reference.

I read certain newspapers and blogs religiously, and will use the various items in the list to support my arguments against the propaganda perpetuated by other bloggers who merely repeat pundits’ talking points.

I am so tired of the swiftboat types cherry-picking words and using them as sound bites that I try to back my statements with examples (such as what he has attempted for the military). The sound bite I hear the most in my part of West Texas is that President Obama says we are “no longer a Christian nation.” FactCheck.org has the quote from his speech that says we are “no longer JUST a Christian nation,” but that doesn’t mean a thing to the groups I am addressing.

Note that I’ve added a couple of items at the end.

I am always being asked to grade Obama’s presidency. In place of offering him a grade, I put together a list of his accomplishments thus far. I think you would agree that it is very impressive. His first six months have been even more active than FDR’s or LBJ’s — the two standards for such assessments.

Yet, there is little media attention given to much of what he has done. Of late, the media is focusing almost exclusively on Obama’s critics, without holding them responsible for the uncivil, unconstructive tone of their disagreements or without holding the previous administration responsible for getting us in such a deep hole. The misinformation and venom that now passes for political reporting and civic debate is beyond description.

As such, there is a need to set the record straight. What most impresses me is the fact that Obama has accomplished so much not from a heavy-handed or top-down approach but from a style that has institutionalized efforts to reach across the aisle, encourage vigorous debate, and utilize town halls and panels of experts in the policy-making process. Beyond the accomplishments, the process is good for democracy… and our democratic processes have been battered and bruised in recent years.

Let me know if I missed anything in the list (surely I did).

Here is a list of Obama’s accomplishments as of August 2009.

Oh, and he built a swing set for the girls outside the Oval Office!

[Editor’s Note: This is basically a list of positives and there are many items on this list that progressives will disagree with, will consider to be cosmetic, or will fault for a lack of follow-through — and there are without doubt a lot of negatives not included. But we think this is an impressive list just the same.]

This entry was posted in Rag Bloggers and tagged Obama Administration, Obama Presidency. Bookmark the permalink.

14 Responses to What Obama Has Done Right : The List of 90