The following article outlines technical reasons that the White House e-mail system failed and cannot provide evidence for an investigation into potential criminal activities that emanated from that building. That e-mails were missing, whether inadvertently through bad information technology (IT) practices or through deliberate removal of message stores and archives, has been known for some time. Not until recently, however, has the discussion turned to technical aspects of the loss.

From a purely technical perspective, it is absurd to claim that “[t]he system would require 18 months to ingest the existing backlog of messages in the Microsoft Xchange system” and “[t]he system offered users no option to distinguish between Presidential records and political or personal materials,” and the National Archives says as much in the article that follows. It is particularly unfathomable to me as an IT professional for over 20 years that there would be no backup system whatsoever in place for an office as critical as the Executive Branch of the US government. Backup is the first ground-rule for any IT operation, even on the smallest scale.

Let’s be clear about this: there is no such thing as “IT politics.” This was pure and simple George W. Bush / Dick Cheney politics, where revealing any sort of sensitive (read: “illegal”) activity in an e-mail would be strictly taboo. These clowns are criminals through and through.

From my perspective, many of the things written in this article are patently ludicrous. Writing that there are “technical issues and concerns” so vastly understates what is happening here that I cringe at the thought of the Information Technology Political Appointee department at the White House that “maintains” the computing systems there.

Politics and other personal (and organizational) agendas are usually to blame for IT failure. By any reasonable measure, the guardians of White House email used poor IT practice as a tool to circumvent applicable law, avoid disclosure, and maintain control over sensitive data.

One more example of executive branch obfuscation and circumvention of law. 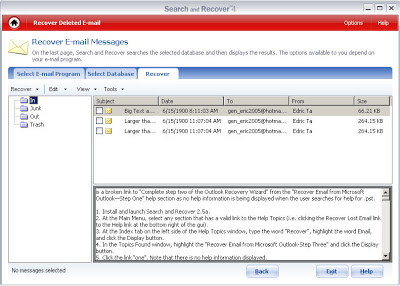 What the White House needs.

Data archiving in the White House is a serious business mandated by the Presidential Records Act of 1978, which was passed following the Watergate scandal.

The Act requires the White House to maintain an historical archive of its activities, policies, and decisions. Despite this law, the White House email archiving system is a model of poor IT practice and has been called “primitive,” “inadequate,” and “not robust.” The system fails to fulfill its most basic requirements: enabling reliable backup, storage, and restore capabilities.

[A]s a ‘message collection system’ even though we all understand that it hardly qualifies as a ’system’ by the usual IT definition.

In a memo to Acting CIO, John Straub, in 2005, IT manager, John McDevitt, described the ad hoc system:

The report points out at least three fatal flaws with the manual email archive process:

Email archiving project failure. In 2003, the White House initiated an Electronic Communications Records Management System (ECRMS) project to automate email archiving. Booz Allen Hamilton was contracted to design the system and Unisys was engaged to test and implement it. According to the internal government program director for the project, John McDevitt, the project was completed in the spring of 2004:

Although the ECMRS was ready for use, current White House CIO, Theresa Payton, terminated the project in 2006 because:

“[t]he system would require 18 months to ingest the existing backlog of messages in the Microsoft Xchange system” and “[t]he system offered users no option to distinguish between Presidential records and political or personal materials.”

The National Archives responded with objections to these reasons, suggesting they did not present sufficient cause to abandon the completed project and revert to manual, and therefore unreliable, email backup techniques.

Update 5/6/08 5:00pm EST: To gain further insight into this situation, I spoke with David Gewirtz, author of the book Where Have All the Emails Gone?. Here’s what David said:

White House email is broken. Their email archiving system is wildly inadequate to the point of negligence. Management of computer assets like laptops, flash drives, and BlackBerrys is completely non-existent.

Email in the White House needs to be fixed. Not because we want to give Congress a bigger stick with which to beat on Presidents, but because some really bad things could happen if it’s not fixed. There are technical issues and concerns, plus security issues and concerns that blast through the political rhetoric and even party affiliation. The practice of archiving is a technical act, while the practice of disclosing is a political or policy act.

We need to make sure we archive the White House email traffic, but that doesn’t mean confidential information must be disclosed to opposing parties or the general public.

Finally, there is breaking news out of the White House today. The White House has responded to Judge Facciola’s request for disclosure of email messages during the first term of the Bush administration. I’ve just gotten those court documents and am working my way through them now. The gist of them seems to be that the White House does not believe further document recovery is warranted. I’m going to be working my way through the full document set and will publish an analysis of it, probably tomorrow.

Read all of it here. / ZDNet